EU grants Ukraine candidate status in show of solidarity, as US rallies allies to target adversaries 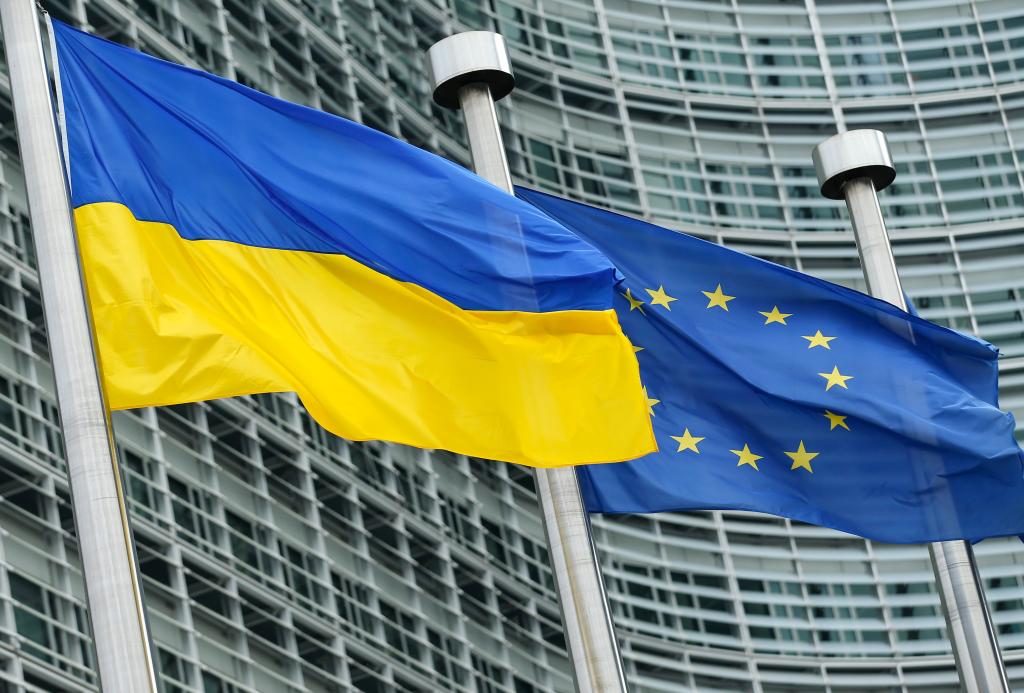 Photo taken on May 24, 2018 shows flags of Ukraine and European Union outside the European Commission headquarters in Brussels, Belgium. (File photo: Xinhua)

The European Union's decision to grant Ukraine candidate status is the start for the West and the US to show their "solidarity" amid a string of meetings since this week, including the summits of the Group of Seven and NATO.

However, hyping threats from Russia or China will not help them earn support from more countries as many are not interested in confrontations started by the US, analysts said.

During the two-day European Council meeting in Brussels, EU leaders on Thursday granted Ukraine the status of official candidate to join their 27-nation club and hailed the geopolitical step as a "historic moment," Reuters reported on Friday.

After the official announcement was made, Ukrainian President Volodymyr Zelensky wrote on Twitter that "Ukraine's future is in the EU." European Council chief Charles Michel also tweeted that this is "a historic moment" and "Our future is together."

Usually, a country with territorial disputes and wars will not be granted candidate status to the EU, but EU made the announcement to show their solidarity. Such a move may also aim to act like compensation - to persuade Ukraine to make compromises and prepare for future talks with Russia. But whether Ukraine will be taken in as a formal member remains uncertain, Wang Yiwei, director of the Institute of International Affairs at the Renmin University of China, told the Global Times.

EU's move for granting Ukraine candidate status has more political meaning - EU leaders want to show their moral support to Ukraine. However, there is a long way for Ukraine from getting the candidate status to getting membership, Cui Hongjian, director of the Department of European Studies at the China Institute of International Studies, told the Global Times.

The lengthy process on negotiations with the bloc just begins and numerous changes await Ukraine, including meeting certain economic criteria and reforming its political systems and legal systems. With the oligarchical politics and economy, and severe problems of corruption in Ukraine, even after the end of the Russia-Ukraine conflicts, there are great uncertainties for Ukraine to get in the EU, said Cui.

According to a Reuters report on Friday, reticence over EU enlargement has slowed progress toward membership for a group of Balkans countries - Albania, Bosnia, Kosovo, Montenegro, North Macedonia and Serbia.

Albanian Prime Minister Edi Rama was cited by Reuters as saying that "it's a good thing to give candidate status, but I hope the Ukrainian people will not have much illusions about this."

The announcement was made to show "solidarity with Ukraine's defenders," according to some Western media as they pointed out that the EU has "dramatically accelerated the process" for countries to get the candidate status, which usually takes years.

However, many analysts said granting Ukraine candidate status is more like a political gesture as the US and the West are eager to show to the global community their "solidarity" and continue the momentum of hyping threats from Russia in the upcoming meetings of G7 and NATO.

The EU summit on Thursday and Friday, the upcoming G7 summit, and the NATO meetings have two purposes - to consolidate internal negotiations and to show solidarity to the outside. More disputes in the West have mounted not only on different views on the Ukraine crisis but also on sanctions on Russia, Cui said.

The US is working to demonize China and make it another country after Russia to stimulate unity in the West. However, Europe and the US have different opinions on whether China has become a major threat - the interactions on this topic are complicated and will change according to the global situations, Cui said.

In recent days, officials from the US and some Western countries have been quoted by media as sending warnings to China or busy hyping China threats. For example, anonymous US officials were cited by Reuters in a report on Wednesday as saying that leaders from the G7 and the NATO will work to increase pressure on Russia, while underscoring their continued concerns about China. And China's "coercive economic practices" will be addressed during the G7 leaders' summit.

The series of meetings of the West and the US would draw small cliques and make confrontations out of a Cold War mentality. Such behavior has made a sharp comparison to the meetings under the BRICS mechanism where more countries, especially the new, rising economies are talking about issues of shared concerns on global development by stressing mutual respect and new thinking patterns on global governance, Wang said.

The 14th BRICS Summit started on Thursday with its agenda centering on how to deal with the problems face by the global community and help with more countries' developments.

Analysts said the summit has sent a strong signal to the world that apart from Western-dominated organizations, multilateral mechanisms formed by non-Western major economies can effectively represent the majority of the international community to realize recovery and overcome global challenges.

They also noted that although the US and West have realized the importance of pulling more countries together, which have not followed them in condemning and sanctioning Russia, they will not succeed since more countries are not interested in being dragged into confrontations.