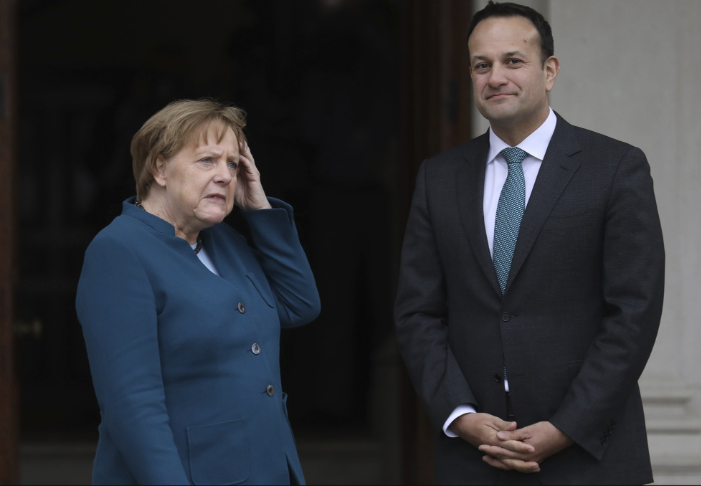 Irish Prime Minister Leo Varadkar looks the media while German Chancellor Angela Merkel adjusts her hair as they pose at the entrance Farmleigh House for the media in Dublin, Ireland, April 4, 2019. (Photo: AP)

Irish Prime Minister Leo Varadkar says the European Union is determined to avoid the return of a hard border with Northern Ireland in the event of a disorderly Brexit.

But he acknowledged it is unclear how that can be achieved. Varadkar says that because of all the uncertainty, “it’s not possible, quite frankly, to have a clear plan.”

He spoke in Dublin Thursday after meeting German Chancellor Angela Merkel. The two leaders visited the currently invisible border to meet people whose lives and livelihoods would be disrupted by the return of customs posts and other obstacles.

Merkel said “we simply have to be successful” in keeping the border open, and “where there’s a will there’s a way.”

The two leaders said they hoped cross-party talks in London aimed at finding a compromise Brexit deal would succeed. Merkel said “we are following this with great interest.”

Debate in Britain’s House of Commons has been suspended after water began pouring through a ceiling into the chamber below.

Lawmakers were ordered out of the chamber Thursday as a torrent cascaded onto the press gallery, where journalists sit to watch Commons business.

Experts have warned for years that the Parliament building, one of London’s most famous landmarks, needs urgent repairs. Pipes frequently burst, brickwork is crumbling and the building is riddled with asbestos.

The leak is the latest unexpected event in a week that has seen a series of dramatic votes on Brexit. On Wednesday, for the first time in a quarter of a century, a vote by lawmakers ended in a tie.

On Monday, a dozen environmental activists stripped off in the public gallery to protest climate change.

A leading official in the European Union says he cannot rule out the prospect of customs points being built on the Irish border with Northern Ireland in the event Britain crashes out of the bloc in eight days without a deal.

Top members of the EU’s executive commission have repeatedly warned that a ‘no-deal’ scenario is likely given doubts over whether the U.K. parliament will endorse the Brexit agreement by April 12.

Asked whether border posts would be needed between EU state Ireland and the U.K.’s Northern Ireland, he said the aim is ensure that checks are done “away from the border, if at all possible.”

Currently there is no infrastructure, and goods, livestock and people move freely across the border.

Meetings are planned Thursday between the British government and the opposition Labour Party in an urgent search for a compromise Brexit solution.

The upper House of Lords is also set to consider legislation that would force Prime Minister Theresa May to seek a Brexit delay from the European Union. The bill is aimed at preventing a no-deal Brexit on April 12.

British police are warning politicians to tone down their Brexit rhetoric amid concerns about the volatile public mood as the future of Brexit is debated.

British officials hope to agree on a Brexit plan that can be presented to EU officials ahead of an April 10 summit that will determine if the scheduled exit date can be delayed.