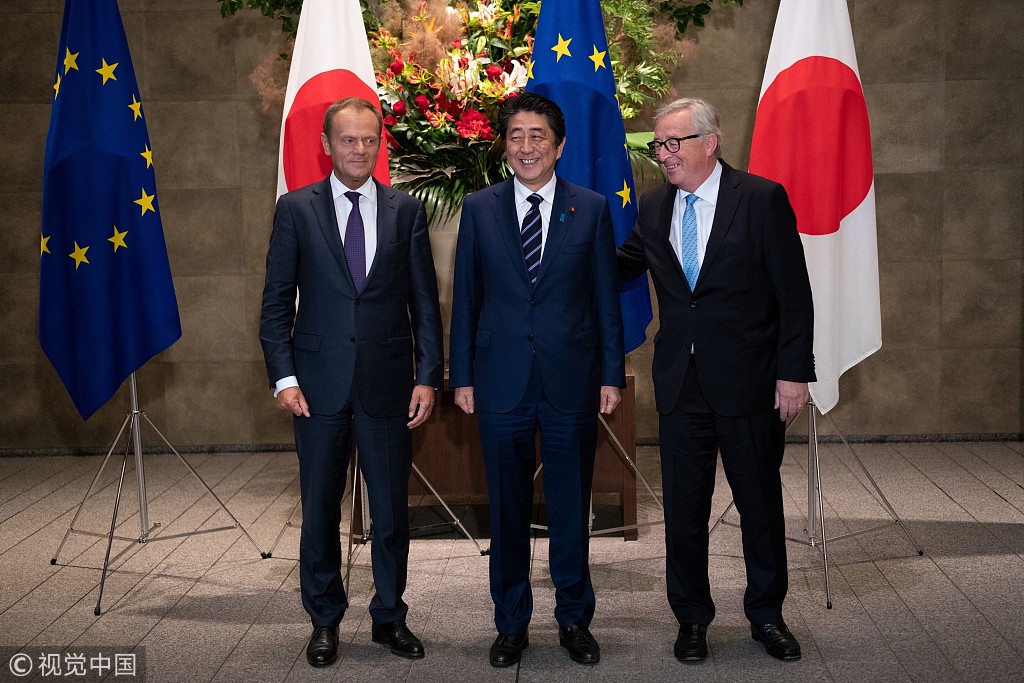 Japan and the EU signed a sweeping free trade deal Tuesday saying they were sending a "clear message" against protectionism, as Washington puts up barriers and threatens a trade war.

The deal signed in Tokyo is the largest ever negotiated by the EU and creates a massive free trade zone, eliminating tariffs for everything from Japanese cars to French cheese.

"We are sending a clear message that we stand together against protectionism," EU Council President Donald Tusk said after the agreement was signed.

Commission head Jean-Claude Juncker said the signatories of the agreement were making "a statement about free and fair trade, we are showing that we are stronger and better off when we work together".

Trump has unsettled America's allies and provoked the ire of its rivals with bombastic statements, hefty trade tariffs, and threats of a trade war.

Abe said the agreement "shows the world the unshaken political will of Japan and the EU to lead the world as the champions of free trade at a time when protectionism has spread".

Agreed last December, the deal is "the biggest ever negotiated by the European Union," according to Commission spokesman Margaritis Schinas, and will create a free trade zone covering nearly a third of the world's GDP.

Under it, Japan will scrap almost all its tariffs on EU goods, particularly dairy items like cheese, though the country's rice industry will remain protected.

The EU will also eliminate about 99 percent of its tariffs on Japanese goods, including crucially removing levies on Japanese cars from the eighth year after the deal is implemented, and scrapping tariffs on car parts immediately.

The agreement must still be ratified by the EU parliament, as well as Japanese lawmakers, but is expected to enter into force from 2019.

The EU -- the world's biggest single market with 28 countries and 500 million people -- is trying to boost alliances in the face of Trump's protectionist administration.

On Sunday, the US president fuelled rising rancour by labelling the EU, along with Russia and China, "a foe" of the United States, and repeating his assertion that the EU has "really taken advantage of us on trade".

Without mentioning Trump by name, Tusk made sharply clear that the agreement was intended as a counterpoint to Washington's current trade policy.

"It's a light in the increasing darkness of international politics," Tusk said.

"We are sending a clear message that you can count on us, both Japan and the EU. We are predictable, responsible, and will continue defending a world order based on rules, freedom and transparency and common sense."

He dismissed concerns about the effect on small businesses, suggesting US trade policy was far more problematic.

"Political uncertainty, tariffs, aggressive rhetoric, unpredictability, irresponsibility, they are the real risks for our businesses, not trade deals," he said.

The EU is seeking access to one of the world's richest markets, while Japan hopes to jump-start an economy that has struggled to find solid growth.

Junichi Sugawara, a senior research officer at Mizuho Research Institute, said Trump's protectionism had "prompted Japan and the EU to speed up negotiations on the deal".

Abe "has good relations with Trump, but in terms of trade, Japan has sided with the EU," he told AFP.

"Japan and the EU will form a united front against a US threat to impose tariffs on key products such as cars."

Talks last year closed the gap on most remaining issues between the EU and Japan, but a dispute resolution mechanism remains to be negotiated.

Tusk and Juncker arrived in Tokyo from Beijing, where they urged calm instead of "conflict" in international trade.

"It is the common duty of Europe and China, but also America and Russia, not to destroy (the global trade order) but to improve it, not to start trade wars which turned into hot conflicts so often in our history," Tusk said Monday in Beijing.

"There is still time to prevent conflict and chaos."

Abe had been scheduled to sign the deal in Brussels last week, but cancelled his trip after devastating floods that killed more than 220 people.

Top image: Donald Tusk, president of the European Council, left, Shinzo Abe, Japan's prime minister, center, and Jean-Claude Juncker, president of the European Commission, pose for a photograph at the prime minister's official residence in Tokyo, Japan, on Tuesday, July 17, 2018. Japan and the European Union signed a trade agreement on Tuesday in Tokyo that lowers barriers on the movement of goods and services between the two economies and provides a counterweight to US protectionism. (VCG Photo)