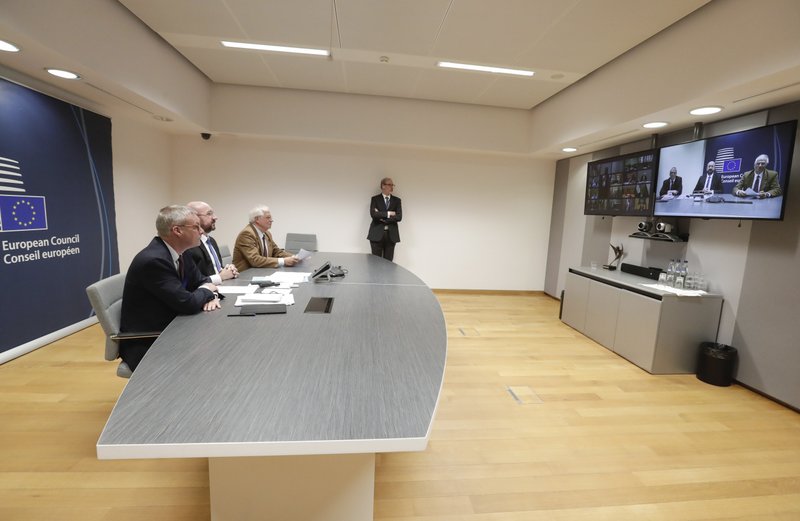 In this Tuesday, March 10, 2020 file photo, European Council President Charles Michel, second left, participates in a video conference call with EU leaders at the European Council building in Brussels. European Union leaders are convening by video conference Thursday, March 26, 2020, for their third summit in three weeks, as they battle to contain the spread of the coronavirus. (Photo: AP)

European Union leaders were holding their third summit in three weeks on Thursday as they battle to contain the spread of the coronavirus and its devastating health impact while managing the havoc the disease is wreaking on their 27 economies.

As the number of deaths in Europe from COVID-19 soared to beyond 12,000 people, Spain has extended a state of emergency that will allow it to impose broader lockdowns, while French President Emmanuel Macron launched “Operation Resilience,” a military-backed response to combat the illness.

To help coordinate the actions of the 27 countries that make up the world’s biggest trading bloc, the European Commission — guardian of the EU’s rule books — has permitted unprecedented border and economic measures so that embattled member countries can save supply chains and businesses.

But while the leaders, holding talks by video conference at 1500 GMT (11 a.m. EDT), all acknowledge the extent of the crisis and the need to support Italy in particular, they are divided over whether to use every economic tool at their disposal now, or keep something in reserve should a second wave of infections start.

“We need to recognize the severity of the situation and the necessity for further action to buttress our economies today, in order to put them in the best condition for a rapid recovery tomorrow,” the leaders of nine countries, including France, Italy and Spain, said on the eve of the talks.

“This requires the activation of all existing common fiscal instruments to support national efforts and ensure financial solidarity, especially within the eurozone,” they wrote in a letter to EU Council President Charles Michel, the summit chairman.

Finance ministers from the 19 countries using the euro single currency agreed in principle this week to letting partners in strife borrow up to 2% of gross domestic product from the European Stability Mechanism, a bailout fund set up during the debt crisis a decade ago with lending firepower of 410 billion euros ($444 billion).

But the group of nine also want the immediate rollout of “coronabonds,” shared debt backed by all eurozone countries. This would let even those hardest-hit borrow at sustainably low interest rates as their spending balloons on hospitals and measures to stop businesses going bankrupt.

This is anathema though to countries like Germany and the Netherlands, which have long objected to common borrowing because of the risk it leaves them holding the check for the finances of shakier countries and reduce incentives for other countries to control their deficits.

They also want to keep some options in their back pocket should a fresh wave of infections strike in the months ahead. For most people, the new coronavirus causes mild or moderate symptoms, such as fever and cough that clear up in two to three weeks. For some, especially older adults and people with existing health problems, it can cause more severe illness, including pneumonia and death.

Other differences concern how to reinvigorate their economies once the crisis is over. Some nations want to start planning now, while others prefer to wait until the real extent of the fallout is understood and an analysis of the best way ahead is carried out.

As governments wrestle over shared borrowing, the European Central Bank stepped up its efforts to bolster the economy. The central bank dropped a longstanding limit on its bond purchase stimulus of no more than a third of a country’s government bonds. That means its 750 billion-euro pandemic emergency purchase program announced last week can target its support toward hard-pressed countries such as Italy.

Economist Florian Hense at Berenberg bank said that while EU governments “dither” over coronabonds, “the ECB continues to deliver. This shows once again that, once it comes to actions of a seriously impressive scale in the eurozone, the ECB is the only institution capable of that, at least so far.”

He said a decision for coronabonds “would still be a most valuable signal of solidarity within the eurozone” that could shape attitudes toward the EU for years to come.

A draft joint statement prepared for the meeting, and seen by The Associated Press, takes broad stock of the measures put in place and contains a political commitment to action, but offers little new on the way ahead. Given their differences, it remains unclear whether the leaders will actually endorse it.

“We will do everything that is necessary to protect our citizens and overcome the crisis, while preserving our European values and way of life. We count on the sense of responsibility of all EU citizens in this difficult moment,” the draft statement said.