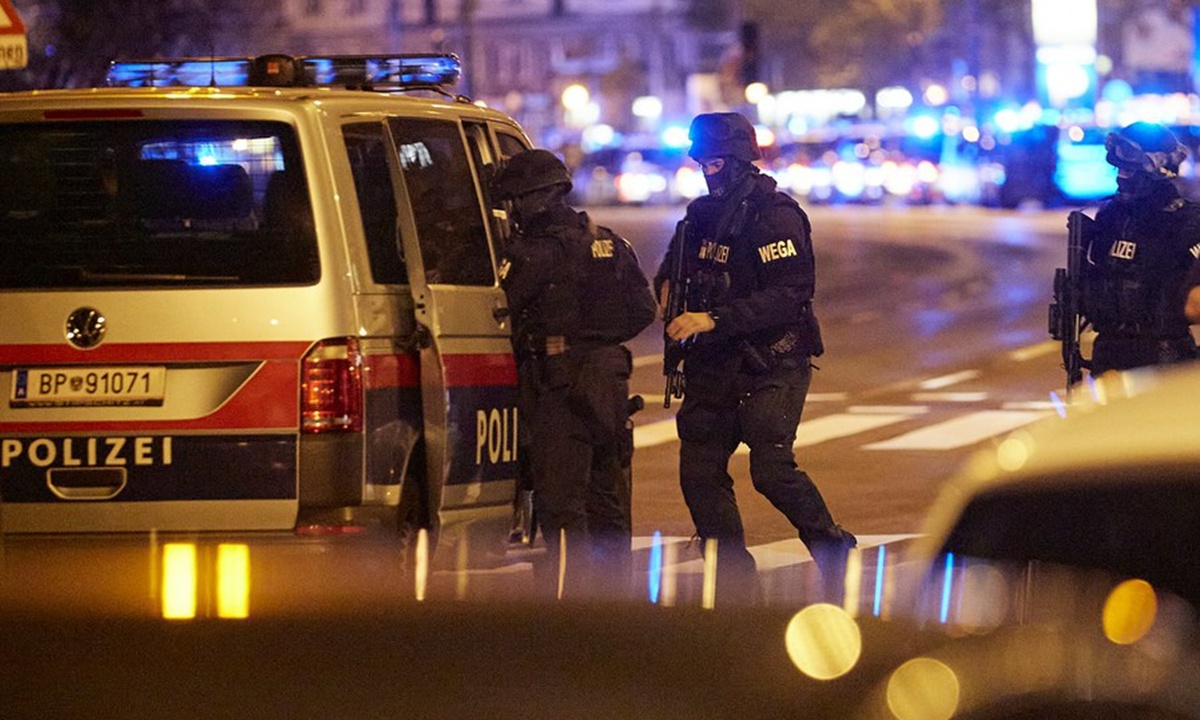 Police officers are on duty on a street in Vienna, capital of Austria, Nov. 2, 2020. (Photo by Georges Schneider/Xinhua)

"Europe strongly condemns this cowardly act that violates life and our human values," said Michel on Twitter. "We stand with Austria," he stressed.

Von der Leyen said she was shocked and saddened by the brutal attack that took place in Vienna. "Europe stands in full solidarity with Austria. We are stronger than hatred and terror."

French President Emmanuel Macron said on Monday evening that the French share the shock and sorrow of the Austrian people following the shootings in Vienna, pledging that "We will not give in."

"After France, it is a friendly country that is attacked. This is our Europe. Our enemies must know who they are dealing with. We will not give in," said Macron on Twitter.

German Foreign Office tweeted late Monday "Even we don't know the full extent of the terror yet, our thoughts are with the injured and victims at this difficult time. We will not give way to hatred which is aimed at dividing our societies."

Italian Prime Minister Giuseppe Conte tweeted: "There is no room for hatred and violence in our common European home."

"We are currently going through difficult times in our republic," Kurz wrote on Twitter. "We will never allow ourselves to be intimidated by terrorism and will fight these attacks resolutely by all means."

"The whole country is in thoughts with the victims, the injured and their families, to whom I express my deepest condolences," added the chancellor.

Austrian police confirmed on its Twitter that one person was killed and several people were seriously injured in multiple shootings Monday evening in central Vienna.

A perpetrator was shot dead by the police, while a police officer is among the seriously injured, the Vienna Police (LPD Wien) wrote on Twitter.

There are six different shooting locations and the attackers used rifles, it added.