European Union leaders made no progress Thursday toward resolving a dispute to unlock a 1.8 trillion-euro ($2.1 trillion) budget and pandemic recovery package which is held up by Poland's and Hungary's rejection of a linkage between rule of law standards and budget disbursements. 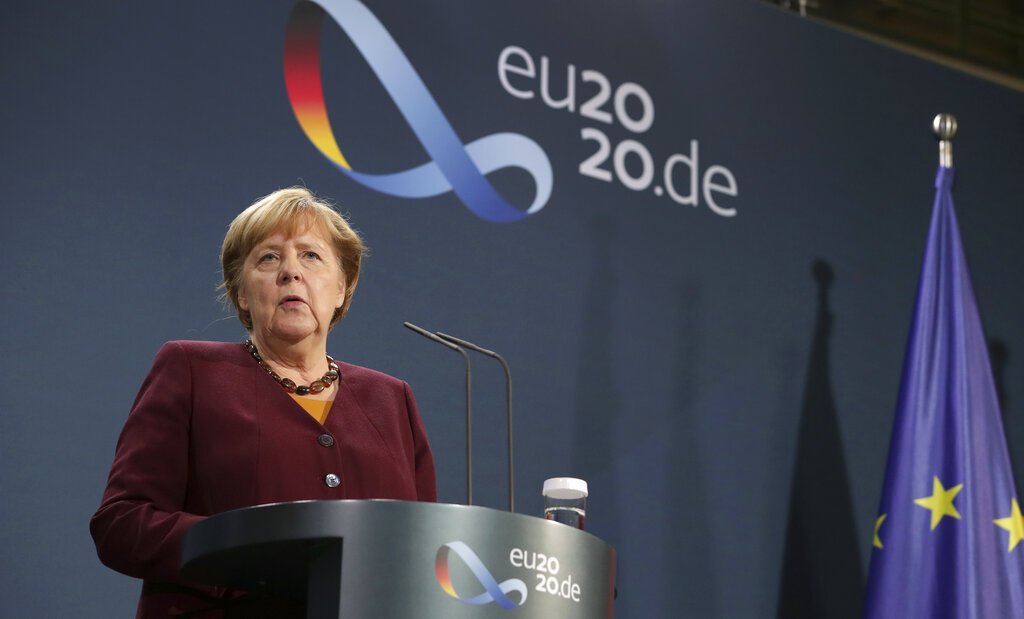 Instead, they were happy to hand the work over to veteran powerbroker Chancellor Angela Merkel of Germany and likely push it toward another summit next month, only weeks before the new 7-year budget is to come into force on Jan. 1.

Merkel said plenty of work was left to reconcile the veto-wielding recalcitrant couple with the rest of the bloc which is eager to start spending its way out of the worst economic downturn in the bloc's history.

“We have a duty to try and find a way," Merkel said, but added that even though time was pressing, “we are still very much at the beginning."

During a carefully choreographed 20-minute session at the start of their video summit, the leaders from the opposing sides stuck closely to their positions but did not acerbate the existing tensions.

European Council president Charles Michel, who chaired the meeting, acknowledged it will be a tall order to break the stalemate, adding he will join Merkel in looking for solutions with all the parties involved before next month's EU summit.

“The European Union's magic is its ability to find solutions even when one believes it's impossible," Michel said.

The deal for the budget and recovery fund looked well on track to enter into force in January — until Hungary and Poland vetoed it this week. They objected to a new “rule-of-law mechanism” that would allow the bloc to deny funds to countries that violate democratic norms — something that both Poland and Hungary have been accused of doing.

The dispute risks delaying the rollout of funds that are urgently needed to weather the economic impact of a new wave of coronavirus infections that risks pushing the region into another recession.

“It is in the interest of everyone that we move quickly on this. People’s jobs depend on this,” European Commission Vice President Frans Timmermans said. “Our economic recovery depends on this. All that is being asked of member states is to respect the treaties they have signed and ratified. That’s it.”

Poland and Hungary say they vetoed the budget for 2021-2027 and the massive aid plan because they think the “rule-of-law” mechanism will be used as an ideological weapon to punish them. Slovenian Prime Minister Janez Jansa is backing the two countries' objections.

The Polish parliament passed a resolution Thursday backing the government’s plan to veto the EU budget if it included the rule-of-law condition. The resolution was largely symbolic, its stated purpose being to strengthen Prime Minister Mateusz Morawiecki’s position.

The resolution calls it unacceptable and inconsistent with the EU treaty to apply “different standards” to different members.

In September, the EU’s executive commission said in its first report on adherence to the rule of law that democratic standards face big challenges in Hungary and Poland, noting threats to the judicial systems, anti-corruption frameworks and media freedom. The EU has opened legal procedures against the two countries over what it considers systemic threats to the rule of law.

In France, European affairs minister Clement Beaune warned that if Poland and Hungary stick to their positions, all other member states could try to find a way forward without the pair.

“As a last resort, we would look at ways to go ahead without the countries who block, as Europe can’t be held hostage by a certain number of governments who don’t want to move forward,” Beaune said.

Dutch Prime Minister Mark Rutte said however, that leaving two member countries behind and “to do something with 24, 25 nations would be the nuclear option but that is not part of the discussion now."

If leaders fail to break the stalemate before the end of the year, the bloc will continue to spend but function on limited resources, with a maximum of one twelfth of the budget for the previous financial year to be spent each month. Many projects for Poland and Hungary could be held up.