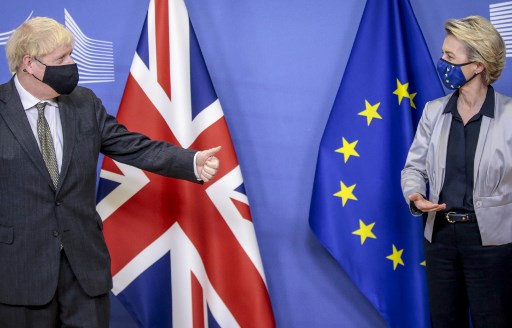 EU leaders met in person Thursday for a packed summit aiming to salvage the bloc's landmark post-coronavirus recovery plan, as the threat of an imminent no-deal Brexit loomed large.

London and Brussels have said they will decide by Sunday whether to press on with talks aimed at thrashing out a post-Brexit trade deal, after British Prime Minister Boris Johnson and EU chief Ursula von der Leyen failed to bridge "major differences" at a dinner meeting.

The EU ratcheted up pressure by publishing its no-deal contingency plan to protect air and road travel and fishing rights just three weeks ahead of a year's end deadline, as negotiators from the two sides resumed talks in Brussels to find a way forward.

The uncertainty over Brexit will be the hulking elephant in the room during the two-day summit that was already set to grapple with several other crises.

Leaders are looking to salvage the EU's 1.8-trillion-euro ($2.1-trillion) budget and coronavirus recovery package, seen as vital for the continent's battered economies, after it was blocked by Hungary and Poland over provisions linking it to the respect for rule of law.

Budapest and Warsaw are major recipients of EU budget cash, and the new mechanism was seen as a way by critics to slow a steady slide into authoritarianism in those countries.

Both governments have been accused by Brussels of rolling back democratic freedoms, notably judicial independence in Poland and press and civil society freedoms in Hungary.

Germany, which holds the EU's rotating presidency, is looking to break the logjam with a legal "declaration" that would provide countries further clarity on how the rule-of-law mechanism would work.

Polish President Andrzej Duda said a provisional deal had been accepted by Poland and Hungary, but Berlin still needs to convince other member states worried that the compromise could water down the EU's values.

"We will see today whether we will find unanimity for this," German Chancellor Angela Merkel said as she arrived for the start of the summit.

Hungarian Prime Minister Viktor Orban said the bloc was "just one inch from reaching a consensus".

The summit will also weigh the sensitive issue of whether to impose sanctions on Turkey over its stand-off on energy resources with EU members Greece and Cyprus in the Eastern Mediterranean.

Ankara has been challenging Athens over maritime territory in the region, repeatedly sending a gas exploration vessel into Greek waters.

France, Greece, and Cyprus are pushing for strong action against Turkey, but other EU nations including Germany, Italy and Poland oppose slapping broad sanctions or an embargo on a fellow NATO member.

"It is very clear what is at stake here: the credibility of the European Union," Greek Prime Minister Kyriakos Mitsotakis told reporters.

A draft conclusion of the summit envisioned a staggered approach, with new names of individuals and companies added to a blacklist and the threat of supplementary sanctions kept in reserve if Turkey does not change tack.

NATO Secretary General Jens Stoltenberg was not part of the summit, but met Portugal's Prime Minister Antonio Costa beforehand and used the opportunity to send a message of caution.

He said that Turkey was an "important ally" that had helped battle the Islamic State group and hosts millions of refugees from Syria.

The EU summit in Brussels -- the first since the election of Joe Biden as the next US president -- sees leaders meeting face-to-face after recent videoconferences were held as a coronavirus prevention measure.

The pandemic hammering the continent will remain a major issue as leaders look to coordinate attempts to avoid a third wave of infections and organise future vaccination campaigns.

Debate over climate is also expected to be heated, as the 27 EU members are looking to strike an agreement to increase the bloc's target to slash emissions.

The hope is for a 55-percent reduction of European emissions in 2030 from 1990 levels and carbon neutrality by 2050, but some countries such as Poland disagree over how to get there.

To avoid a veto from Warsaw, the bloc could agree to a collective commitment to cut emissions that would not place the burden on individual nations.