Following a time-consuming dinner discussion, leaders of the European Union (EU) on Thursday gave credence to Britain's allegation that "highly likely" Russia is responsible for poisoning a former spy on British soil, in which Moscow has denied any involvement. 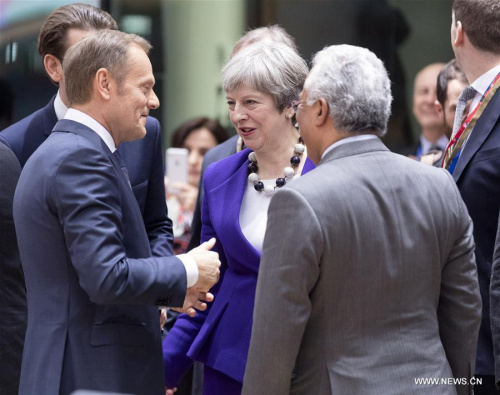 "EUCO (European Council) agrees with UK government that highly likely Russia is responsible for #SalisburyAttack and that there is no other plausible explanation," tweeted European Council President Donald Tusk on Thursday evening after a summit working dinner.

According to the European Council conclusions, the leaders of the 28-member bloc "condemns in the strongest possible terms the recent attack in Salisbury, expresses its deepest sympathies to all whose lives have been threatened and lends its support to the ongoing investigation."

"We stand in unqualified solidarity with the United Kingdom in the face of this grave challenge to our shared security," read the conclusion.

As "the use of chemical weapons... constitutes a security threat to us all," the conclusions said EU member states "will coordinate on the consequences to be drawn in the light of the answers provided by the Russian authorities."

"The European Union will remain closely focused on this issue and its implications," read the conclusions.

Earlier on Thursday, after British Prime Minister Theresa May met with German Chancellor Angela Merkel and French President Emmanuel Macron in the margin of the EU summit in Brussels, a spokesperson of Downing 10 claimed that "the UK, Germany and France reaffirmed that there is no plausible explanation other than that the Russian state was responsible."

The three leaders also agreed on "the importance of sending a strong European message in response to Russia's actions and agreed to remain in close contact in coming days," said the spokesperson.

Tasked with wooing support from her European counterparts, May told reporters upon her arrival at the summit that "Russia staged a brazen and reckless attack against the United Kingdom when it attempted the murder of two people on the streets of Salisbury."

Foreign ministers of the European Union (EU) on Monday said in a statement that the 28-member bloc "strongly condemns the attack" and "expresses its unqualified solidarity with the UK and its support, including for the UK's efforts to bring those responsible for this crime to justice."

Former Russian double agent Skripal, 66, and his daughter Yulia, 33, were found unconscious on a bench outside a shopping center in Britain's southwestern city of Salisbury on March 4. They remain in critical condition in hospital.

Britain claimed the pair were exposed to a nerve agent and holds Russia responsible. The Russian government has denied any role in the incident.

Following the incident, Britain expelled 23 Russian diplomats and announced freezing of Russian state assets in Britain, suspension of all planned high-level bilateral contacts, and a boycott of this year's World Cup in Russia by ministers and royal family members.

Moscow expelled an equal number of British diplomats in response.

Moscow denied involvement in the poisoning of ex-spy Sergei Skripal in Britain and insisted on direct participation in the investigation of the incident.

"Russia firmly insists on a comprehensive investigation of what has happened in Salisbury. We are ready to take most active part in it," Vladimir Yermakov, head of the Department for Nonproliferation and Arms Control of the Russian Foreign Ministry, said at a briefing for foreign diplomats.