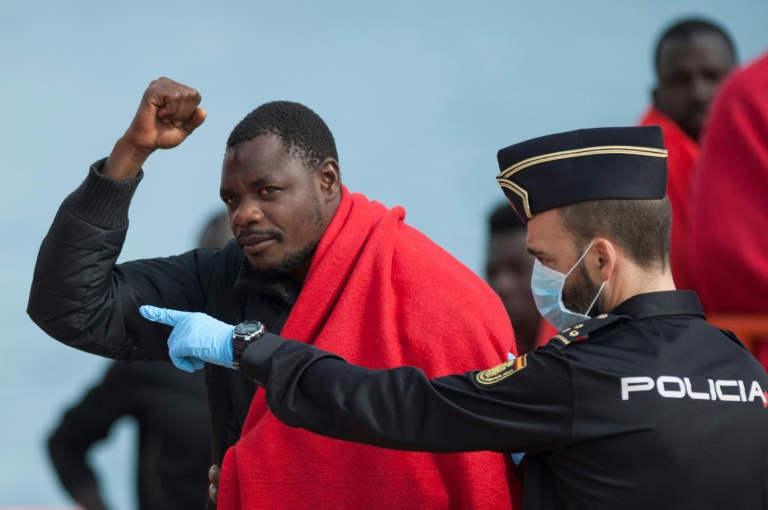 There has been a sharp decrease in migrant arrivals in Europe since a peak in 2015 (Photo: AFP)

The talks involving 16 of the bloc's 28 leaders aim to mend rifts over burden sharing but also to shore up German Chancellor Angela Merkel, pressed by her own government to tighten her liberal approach to asylum.

The meeting was called last week to clear the air before a scheduled full summit on Thursday and Friday.

With four eastern anti-migrant EU countries snubbing the meeting, Merkel and other leaders have downplayed hopes of an EU-wide agreement, saying smaller ad-hoc deals may be the only way forward.

The urgency of finding a solution was highlighted by the plight of the Lifeline, the second rescue vessel left adrift in the Mediterranean after Italy and neighbouring Malta refused it permission to dock.

The German charity operating the ship, which is carrying 239 Africans, on Sunday took a swipe at Italy's far-right interior minister Matteo Salvini over his reference in a Facebook post to its consignment of "human flesh".

"Dear Matteo Salvini, we have no meat on board, but humans," it said in a statement.

In a sign of the growing tensions within the EU, French President Emmanuel Macron suggested Saturday that countries who refused to pull their weight on accepting asylum seekers should have their EU benefits cut.

In a dig at Poland, Hungary, Slovenia and the Czech Republic, he said "countries that benefit massively from EU solidarity" could not invoke "national self-interest when it comes to the issue of migrants".

The four former communist states, who have ducked out of Sunday's talks, have long been opposed to taking in migrants.

Macron also riled Italy, the main landing point for African migrants, by saying that the migration emergency, which peaked in 2015, had passed and was now mainly a political issue.

"The immigration emergency continues in Italy, partly because France keeps pushing back people at the border," Italian deputy prime minister Luigi Di Maio shot back on his Facebook page, warning Macron risked turning France into "Italy’s number one enemy" on the issue.

After turning away the Aquarius, which later docked in Spain, Rome vowed Saturday to block the Lifeline.

Reflecting popular anger over the failure of EU members to shoulder more of the migrant burden, Rome has pledged not to take in any more asylum-seekers.

Its stance has raised tension both with Germany and within Merkel's coalition government, with EU diplomats saying the mini-summit is to help "save" the chancellor.

In the latest crisis, her new hardline interior minister Horst Seehofer has given her until the end of June to find a European deal to curb new arrivals.

If that fails, he has vowed to order border police to turn back migrants, which means many will likely have to return to Italy.

Under the EU's so-called Dublin rules, asylum-seekers must be processed in the country where they first arrive, often Mediterranean countries such as Italy, Greece and Spain.

EU leaders last December had set the end of June as a deadline to reform the rules by establishing a permanent mechanism to relocate asylum-seekers throughout the bloc.

With an agreement appearing elusive, Germany says it is now pushing for "bilateral, trilateral and multilateral" deals.

The draft conclusions included calls to speed up returns to countries tasked with processing them, such as Italy, causing anger in Rome.

EU diplomats and sources said the talks due to begin at 3 pm (1300 GMT) will also tackle how to further boost patrols on the bloc's external borders.

Cooperation deals with Turkey and Libya, the main transit countries, have sharply cut, at least for now, the flow of migrants to Europe since a 2015 peak of over one million.

The leaders are also to discuss proposals for centres in countries outside the bloc to separate genuine war refugees from economic migrants, who can be sent home.

But with fears of new migrant surges in the future, diplomats warn the asylum reform impasse could destroy the EU's signature achievement, the Schengen system of borderless travel.