European ministers signed off on Britain's draft divorce deal on Monday as they launched a "painful" final week of negotiations on future cross-Channel ties.

Brexit negotiator Michel Barnier and the Union's Austrian rotating presidency said the negotiated text would be presented to EU leaders at a signing summit on Sunday. 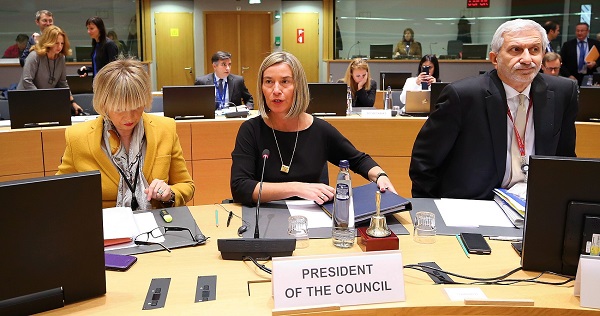 "A painful week in European politics is starting," he warned. "We have the divorce papers on the table. Forty-five years of difficult marriage are coming to an end."

Meanwhile, detailed discussions continue on a parallel political statement setting out the bloc's ambitions for future relations with post-Brexit Britain -- and on a possible extension to the transition period.

Britain will leave the Union on March 29 next year, but remain within its single market for a further 21 months as negotiators seek a deal to avoid a potential breakdown in trade between the key economic partners.

If the parties struggle to find a deal before the end of this period, Britain can request a one-off extension.

Barnier has suggested that this should expire at the end of 2022, but he said member states have yet to sign off on this.

"I think that during this week we'll have a definitive proposition for this date. The decision will be made jointly between the United Kingdom and the 27," Barnier said. 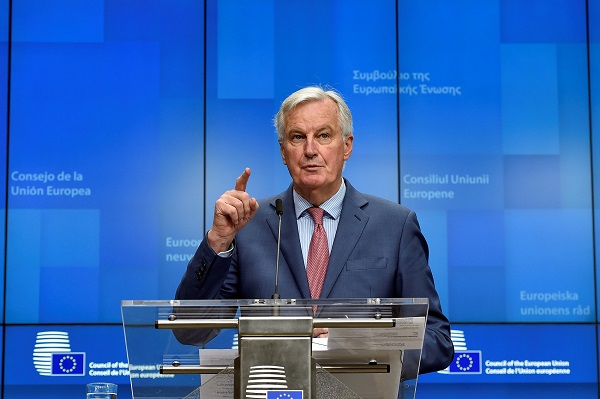 Neither European member states, who want to protect access to their single market, nor hardline British Brexiteers, who fear being trapped in a bloc where they don't make the rules, want an endless transition.

Barnier stressed it was Prime Minister Theresa May's British government that requested the extension option and warned: "It can't be indefinite. It needs to be decided."

In London, May said she wants to reach a trade deal by the end of 2020 to avoid asking for an extension, but that if the transition is prolonged it should be out of the way by "the next general election."

If May survives domestic anger over the deal, the next British election is scheduled for 2022.

Preparations continued meanwhile for Sunday's summit, where May and her 27 colleagues are supposed to sign the withdrawal agreement.

May will be in Brussels this week to see the president of the EU commission, Jean-Claude Juncker, but her spokesman could not say when she would arrive.

"I don't have a timeline to set out for you but negotiations are very much ongoing and I'd expect coming days to see very intense talks continuing," he said.

London wants to lay out in as much detail as possible a route to a free trade agreement, in part to shore up support in a British parliament that may yet reject the deal.

Brussels, meanwhile, insists Britain cannot have the same privileged access to the single market after Brexit on March 29 next year. 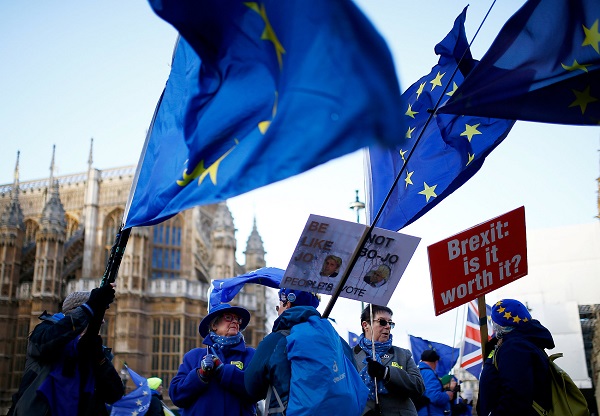 Anti-Brexit demonstrators protest outside the Houses of Parliament in London, Britain, November 19, 2018.

While the EU 27 have remained publicly united through the 17-month negotiation, Britain's political camps are fighting bitterly among themselves.

Conservative hardliners and May's Northern Irish unionist allies have pledged to vote down the treaty despite the threat of a calamitous no-deal Brexit.

The opposition Labour Party, scenting a chance to topple May's government, has also warned that its members will not support her deal.

EU officials are surprised by the furious debate and mostly refuse to intervene, but French minister for European affairs Nathalie Loiseau said both sides had "exhausted their margin to manoeuvre".

Dutch foreign minster Stef Blok said it was imperative that the political statement "lays the foundation of our future relationship, it has to be ambitious".

Some member states were annoyed that their rights to fish in British waters were not guaranteed in the withdrawal deal and have been left to future talks.

Spain is also concerned that the draft texts do not, in its view, make clear that it retains a veto on the future status of Gibraltar, the British territory it claims on its southern coast.

"Until we have the future declaration and we know what it says, whether we agree or not, we are also not going to approve the withdrawal agreement," said Spanish Foreign Minister Josep Borrell.

Nevertheless, Belgian foreign minister Didier Reynders said of the deal: "Here, it will survive. We are waiting for the same situation in London, but here in Brussels it will survive."