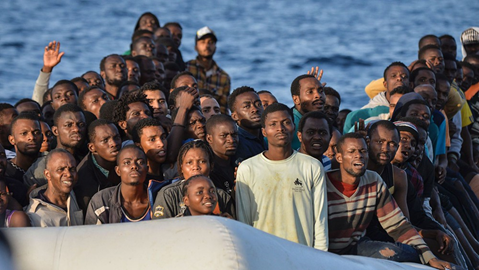 The European Union proposed Tuesday financial incentives to member countries to admit migrants from Mediterranean rescue boats as part of efforts to resolve a weeks-long showdown with Italy.

The proposals expand on those agreed at a fractious EU summit in July to respond to the decision by Italy's new populist government to turn away such vessels.

The European Commission proposed offering volunteering EU countries funds to set up and run centers on their territory to determine whether people qualify for asylum in Europe or should be sent home as economic migrants.

The Commission, the 28-nation EU's executive arm, also proposed giving any volunteer countries in the bloc 6,000 euros for every asylum seeker they admit from those "controlled centers." 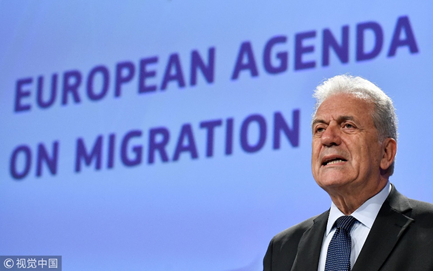 EU Migration Commissioner Dimitris Avramopoulos gives a joint press conference on managing migration and upgrading the EU Visa Information System at the EU Headquarters in Brussels on May 16, 2018. (Photo: CGTN)

"We are ready to support member states and third countries in better cooperating on disembarkation of those rescued at sea," said EU migration commissioner Dimitris Avramopoulos.

"But for this to work immediately on the ground, we need to be united not just now, but also in the long run," the former Greek politician said.

In addition to processing centers within the EU, the summit also agreed to consider setting up "disembarkation platforms" outside the bloc, most likely in North Africa, in a bid to discourage migrants from boarding EU-bound smuggler boats. 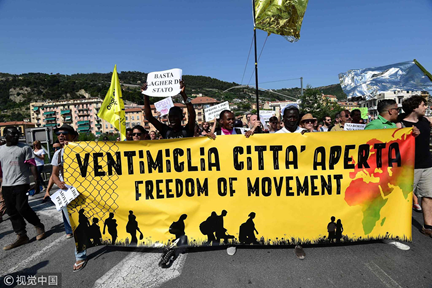 People hold a banner reading "Ventimiglia, open city, freedom of movement" during a demonstration at the call of an Italian association "Progetto 20K" to help migrants in Vintimille, northern Italy, close to the French border on July 14, 2018. (Photo: CGTN)

EU ambassadors were set to discuss the disembarkation centers on Wednesday with no sign that any of those countries will agree to them.

The bloc's divisive political crisis over migration returned in the last few weeks despite a sharp drop in migrant arrivals due to aid-for-cooperation deals with transit countries Libya and Turkey.

The problem is the bloc has so far failed to settle rows over how to share responsibility for migrants and ease the stress on coastal countries such as Italy and Greece.

Eastern member states including Poland and Hungary have refused to admit migrants under an agreement to relocate within the bloc asylum seekers from Greece and Italy. 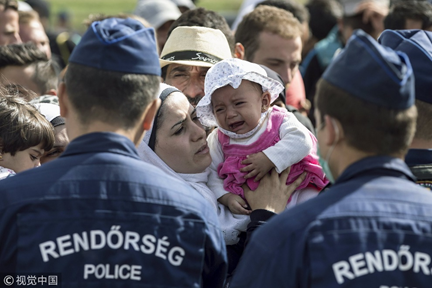 A migrant kisses a child who is crying as they stand in front of Hungarian police officers while waiting to board buses at a collection point in the village of Roszke on September 7, 2015. (Photo: CGTN)

The deal was struck in 2015 at the height of the migration crisis, Europe's worst since World War II.

Italy's populist government, which was elected amid popular anger over migration, agreed Monday to continue accepting migrants rescued at sea, at least until the bloc finds a solution for sharing responsibility.