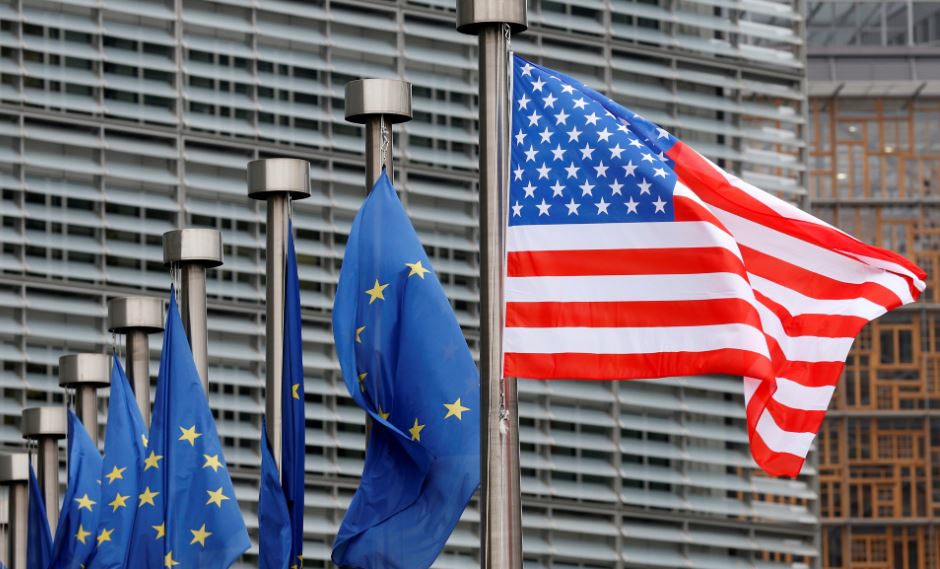 US and European Union flags are pictured during the visit of US Vice President Mike Pence to the European Commission headquarters in Brussels, Belgium in February 2017. (Photo: CGTN)

The European Union said on Tuesday it was open to talks with Washington in a dispute over aircraft subsidies after the United States threatened an additional $4 billion in tariffs on EU goods including olives, Italian cheese and Scotch whisky.

Just days after reaching a truce in the US-China trade war, the US Trade Representative's office (USTR) opened the new front with Europe on Monday in the long-running dispute.

It added the list of additional products to $21 billion' worth of EU goods that could be hit with tariffs announced in April – alarming industries on both sides of the Atlantic.

The EU hit back, saying the dispute should be adjudicated by the World Trade Organization (WTO) and the United States could not make its own tally of potential hurt to calculate retaliation.

The bloc said it remained opened to negotiations "provided these are without preconditions and aim at a fair outcome," but added it was also preparing to retaliate as soon as the WTO arbitrator had ruled on its rights to do so.

The United States and the EU have threatened to impose billions of dollars of tit-for-tat tariffs on planes, tractors and food in a nearly 15-year dispute at the WTO over aircraft subsidies given to US planemaker Boeing Co. and its European rival, Airbus SE.

Senior officials from Boeing and a US aerospace trade group urged the US government last month to narrowly tailor any tariffs imposed on the EU over illegal aircraft subsidies to avoid harming American manufacturers.

Washington had signaled its openness last month to working on an enforceable mechanism to govern government subsidies for aircraft production, potentially paving the way for an end to the aircraft subsidy fight.

The WTO has found that the world's two largest planemakers received billions of dollars of harmful subsidies in a pair of cases marking the world's largest-ever corporate trade dispute.

The USTR said it would hold a hearing on the proposed additional products on Aug. 5 and could immediately impose increased duties on the products included in the initial list, if the WTO arbitrator issued a decision before the public comment period ended on the supplemental list.