WORLD EU plan to freeze deal with China shows politicians' courtship of US, may not rule out ratification

EU plan to freeze deal with China shows politicians' courtship of US, may not rule out ratification 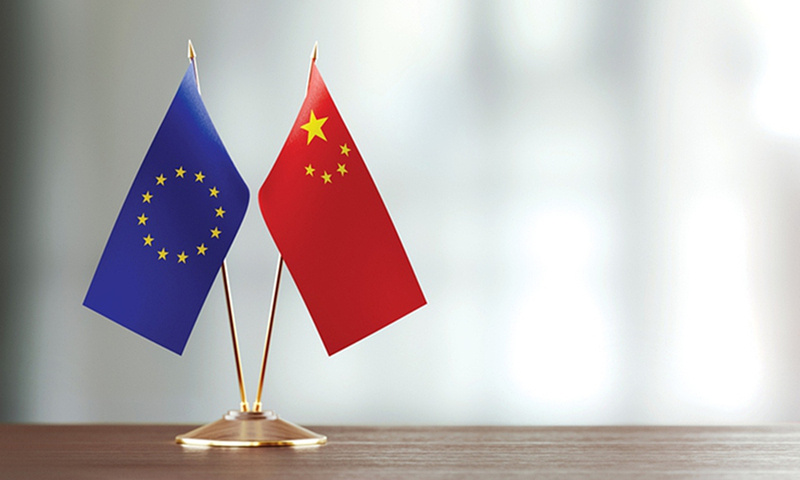 The European Parliament reportedly plans to pass a motion on Thursday to formally "freeze" the China-EU investment agreement, which shows the split in opinions in the EU and would damage mutual trust with China. But despite the motion, the investment deal may still be ratified, at a later date, Chinese observers said.

The EU is likely to ratify the deal in the first half of 2022 when France takes over the rotating EU Council presidency, observers said.

According to Politico, the European Parliament is about to pass a motion on Thursday to freeze the EU's investment agreement with China, after China's countermeasures on EU lawmakers earlier this year over Xinjiang-related issues.

Zhao Lijian, spokesperson of the Chinese Foreign Ministry, said at Wednesday's media briefing that the China-EU investment agreement is a balanced and win-win agreement. It is not a gift from one side to the other and it serves the interests of both sides.

Zhao said China's countermeasures are necessary and a response to the EU's sanctions against China, urging the EU to reflect on this, enhance mutual understanding through dialogue and communication, and properly manage differences.

European Parliament press officer Natalie Kontoulis told the Global Times on Wednesday that MEPs will vote on the resolution on Thursday, and the draft resolution says that "Parliament takes the position that any consideration of the EU-China Comprehensive Agreement on Investment, as well as any discussion on ratification by the European Parliament, have justifiably been frozen because the Chinese sanctions are in place."

On the China-EU investment agreement, Kontoulis said a political agreement has not yet been confirmed by either the member states or parliament, and it has not been finalized in a legal form.

"Freezing means that the discussion of the deal will be suspended in the EU, which does not mean the deal will not be ratified, as the ratification process will take months due to long procedures, including translating the documents," Wang Yiwei, director of the Institute of European Studies at the Renmin University of China, told the Global Times on Wednesday.

The possible motion was probably a result of the EU being pressured by the US and the maladaptation of some EU members after China's countermeasures, and some institutions of the EU also attempted to use the deal to bargain for a new internal power distribution, Wang said.

However, the European Parliament's potential move of "freezing" the deal may reduce both sides' mutual political trust and may result in the further increase in political and economic conflicts, Cui Hongjian, director of the Department of European Studies at the China Institute of International Studies, told the Global Times.

It's worrying that the European Parliament's unreasonable move may force European and Chinese companies to lower their expectations for each other's market and may even cause panic that will impact investment decisions, Cui said.

The EU is deeply split in its views on relations with China and the deal, and some people in the EU tried to express their discontent over China's countermeasures with some believing that rejection of the deal is what the US wants, Wang said. The EU will jump into the US' trap of sabotaging the EU's relations with China if the freeze proceeds, he said.

"The motion is just an emotional expression of some people in the EU, and the EU will work to adjust its relations with China in the second half of the year, especially after the UN Biodiversity Conference in Kunming in October," Wang said.

The EU is likely to ratify the deal in the first half of 2022 when France takes over the rotating EU Council presidency, he said.