British Prime Minister Boris Johnson started phoning EU leaders Saturday to sell his proposals for a managed Brexit, but he met with pressure to revise his offer -- and to do so quickly. 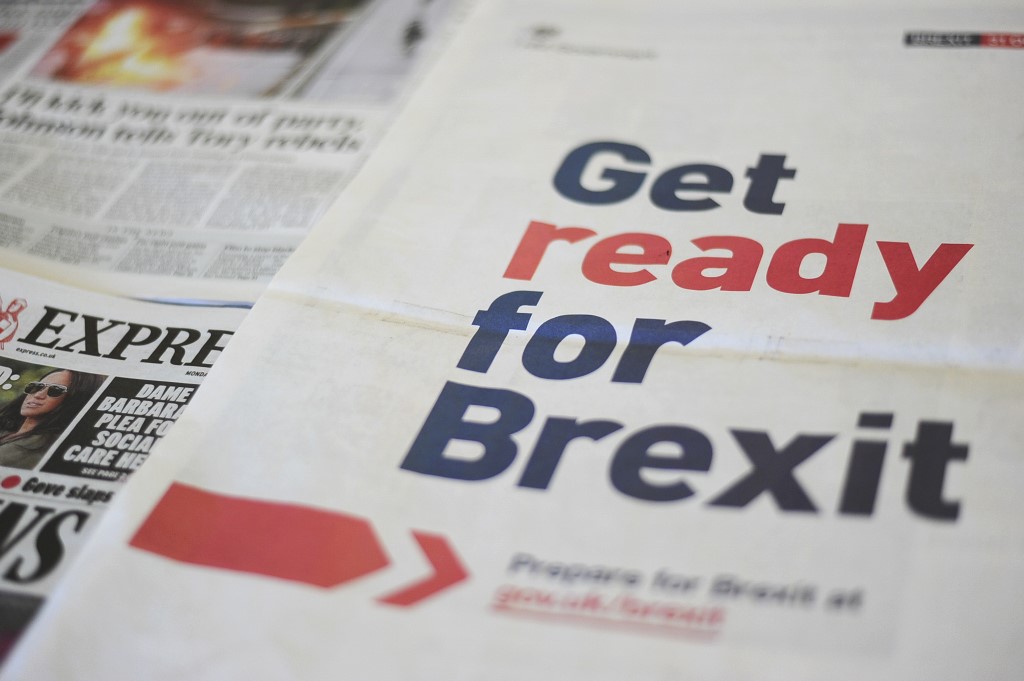 In this file photo taken on September 02, 2019 An arrangement of newspapers photographed as an illustration in London on September 2, 2019, shows a full-page advertisement taken out by the UK Government in several daily newspapers as part of its public information campaign to get the public and business owners ready for Brexit.(Photo: AFP)

Finnish counterpart Antti Rinne -- whose country currently holds the rotating presidency of the European Union -- said he told Johnson "it is important to find a solution within a week".

"Johnson said he agreed with the timetable," Rinne added.

Dutch Prime Minister Mark Rutte tweeted that he had spoken with Johnson by phone and told him "important questions remain about the British proposals" and "there is a lot of work to be done ahead" of a crucial EU summit on October 17-18.

The British leader was expected to call the leaders of other EU countries in the wake of his proposals being given short shrift by Brussels after they were submitted Wednesday.

As they stand, "the UK proposals do not provide a basis for concluding an agreement," a European Commission spokeswoman underlined Friday.

They were to resume Monday, despite the UK having been keen for them to continue through the weekend.

Johnson on Saturday called his plan "a practical compromise that gives ground where necessary" but has also previously suggested it was a broad "landing zone" -- which to Brussels suggests he might yet budge on issues it finds unacceptable.

But in identical articles for the Brexit-backing British tabloids the Sunday Express and the Sun on Sunday, Johnson said the bloc now needed to show "its own willingness to do a deal that the UK Parliament can support".

"They should be under no illusions or misapprehensions," he added.

"There will be no more dither or delay. On October 31 we are going to get Brexit done."

European diplomats say London needs to offer revised, viable proposals before the end of next week so any haggling and legalistic work is done before the summit, which will determine whether Britain is headed for an agreement, no-deal, or an extension.

The EU refuses to characterise the talks held so far as negotiations, preferring to resurrect a Brexit withdrawal agreement struck with Johnson's predecessor Theresa May that has been rejected three times by British MPs.

The main sticking point is a "backstop" for Northern Ireland that under the May agreement would have seen all the UK, or at least Northern Ireland, remaining in the EU's customs union.

It is meant to guarantee no border springs up between the British territory and EU member Ireland -- which would threaten the hard-won Good Friday peace accord -- while also maintaining the integrity of the EU's single market.

Britain's current idea for an alternative is for untried technology to remove the need for most but not all border checks, and for EU standards on goods to continue to apply in Northern Ireland to facilitate trade.

This border plan is not acceptable for the EU. It sees the potential for rampant smuggling, especially as Johnson intends for the rest of the UK to diverge from EU labour, environmental and tax norms to aim for a regulation-lite economy on Europe's doorstep.

"I made clear that the proposed solutions do not ensure the respect of the Good Friday Agreement, EU unity or the integrity of the single market," Ritte said.

Nor does the EU agree with a proposal giving Northern Ireland's assembly an effective veto over the post-Brexit customs arrangement.

If Johnson does not alter those points, it is hard to see the EU moving talks into the negotiation phase.

Yet if he bends on them, Johnson risks losing tenuous support in the UK parliament to maybe pass a Brexit deal, reliant on 10 Democratic Unionist MPs from Northern Ireland and hard-core Brexit MPs in his Conservative Party.

If thwarted, Johnson's best bet may lie with early elections -- but those could only happen after the date he has said Brexit would happen.

There he also faces a challenge, with the UK parliament having passed a law requiring him to seek a Brexit extension from the EU by October 19 if he has not reached a deal by then.

British media speculation that Johnson might get Hungary to break EU ranks and prevent the required unanimity for an extension was denied by Budapest.

Hungary "was not approached to aid in vetoing a possible extension of Brexit," its foreign ministry said in a statement to AFP.