The European Union teed up a vaccine rollout Saturday, even as countries in the bloc were forced back into lockdown by a new strain of the virus, believed to be more infectious, that has spread from Britain to France and Spain and even as far as Japan. 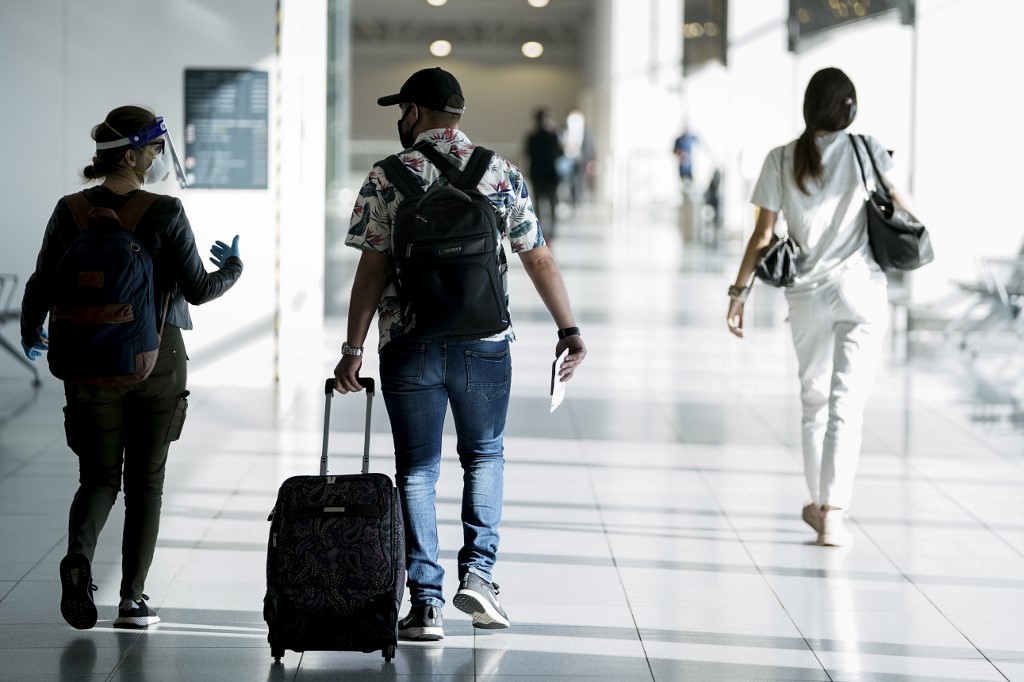 Passengers wearing protective face masks arrive at Brussels Airport, in Zaventem, on June 15, 2020 as Brussels Airport reopens for travels within Europe and the Schengen zone, after a months-long closure aimed at stemming the spread of the COVID-19 pandemic, caused by the novel coronavirus. (Photo: AFP)

The pandemic has claimed more than 1.7 million lives and is still running rampant in much of the world, but the recent launching of inoculation campaigns has boosted hopes that 2021 could bring a respite.

First doses of the Pfizer-BioNTech vaccine arrived in hard-hit Italy, Spain and France on Saturday morning ready for distribution to elderly care facilities and hospital staff.

"We'll get our freedom back, we'll be able to embrace again," Italian Foreign Minister Luigi Di Maio said as he urged Italians to get the shot.

Vaccinations in all 27 European Union countries will begin on Sunday, after regulators approved the Pfizer-BioNTech vaccine on December 21.

Several countries including France, Spain, Japan, Denmark, Lebanon, Germany, Australia and the Netherlands have reported cases of the new strain, which has sent jitters through already overstretched health services.

More than 25 million total infections have been recorded in Europe, according to an AFP tally on Friday, and Russia on Saturday said it had topped three million.

The UK itself passed 70,000 coronavirus deaths on Friday and is confronted with surging infections from the new strain.

Six million people in the south and east were locked down from Saturday, making for a total of 24 million nationwide.

The lockdown and curfew is slated to last until January 24.

The first French case of the new coronavirus variant was found in a citizen resident in Britain who arrived from London on December 19, the French health ministry said late Friday.

They are asymptomatic and self-isolating at home in Tours in central France, and contact-tracing has taken place for the health professionals who treated him.

In Spain, four cases were confirmed in Madrid on Saturday.

The patients were "not seriously ill," the Madrid regional government's deputy health chief Antonio Zapatero said, adding that "there is no need for alarm".

The new strain of the virus, which experts fear is more contagious, prompted more than 50 countries to impose travel restrictions on the UK, where it first emerged.

Bottlenecks of thousands of trucks in southern England were ebbing Saturday, after France lifted a 48-hour entry ban for drivers with a negative coronavirus test and kept its Calais port open on Christmas Day.

South Africa has detected a similar mutation in some infected people, but on Friday denied British claims its strain was more infectious or dangerous than the one originating in the UK.

In Asia, China issued a statement hailing the "extremely extraordinary glory" of its handling of the virus that emerged in the country's Hubei province last year, state news agency Xinhua reported.

Tokyo reported a record 949 new daily cases, with the figure for Japan as a whole recently topping 3,000 per day.

In Australia Saturday there was little sign of the usual Boxing Day sale rush on the streets of Sydney.

"Even when we entered the store there were less than 10 people," shopper Lia Gunawan told The Sydney Morning Herald after queueing up for the sales.

Across the world, people are being urged to respect social distancing guidelines, as the World Health Organization urged people not to "squander" the "great, heart-wrenching sacrifices" people had made to save lives.

"Vaccines are offering the world a way out of this tragedy. But it will take time for the whole world to be vaccinated," WHO chief Tedros Adhanom Ghebreyesus warned on Friday.

In the Vatican Friday, Pope Francis had pleaded for "vaccines for all" in his traditional Christmas message.

"I call on everyone, on leaders of states, on businesses, on international organisations, to promote cooperation and not competition, to find a solution for everyone... especially the most vulnerable and most in need in all regions of the planet," Pope Francis said.

In authoritarian post-Soviet Turkmenistan, where the government claims no coronavirus cases have been detected, President Gurbanguly Berdymukhamedov claimed that licorice root could cure Covid-19.

Without citing any scientific evidence, former dentist Berdymukhamedov claimed that "licorice stops the coronavirus from developing".