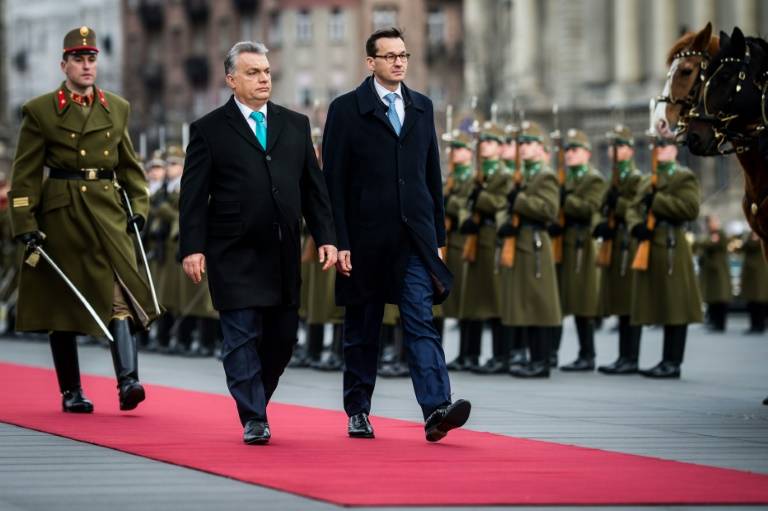 Poland and Hungary are winning the battle against the EU over immigration, the two countries' premiers said Wednesday, with Hungary's Viktor Orban predicting "a year of great confrontations" with Brussels.

"The dial is turning in our direction," Poland's Prime Minister Mateusz Morawiecki said in Budapest, showing a united front with Orban in his first bilateral trip since being appointed last month.

The European Union is taking Hungary, Poland and also the Czech Republic to court over their refusal to accept EU mandatory quotas for asylum-seekers decided by a majority of member states in 2015.

"Member states must decide who they what to let in," Morawiecki said, adding that there were signs in recent elections in Europe that immigration is becoming "an even hotter potato".

The vote in October in neighbouring Austria, that brought in a rightwing government hostile to immigration to power, showed that "Europe is a democratic continent", agreed Orban.

"This will happen (elsewhere) in Europe, it is only a matter of time... You can call it populism but what people want should happen," he said.

Some countries in western Europe are entering "post-Christian, post-national" eras, but it was "impossible" that Hungary would be "forced by anyone into that direction", Orban said.

But Brussels's relations with Hungary and Poland's nationalist governments have soured dramatically in other areas too, and Morawiecki's visit was seen as confirmation of their growing solidarity.

On December 20 the European Commission launched unprecedented disciplinary proceedings against Poland over judicial reforms which Brussels says threaten the rule of law.

Poland's government says the reforms are needed to combat corruption and overhaul the judicial system still haunted by the communist era.

Never before used against an EU member state, the proceedings could lead to the "nuclear option" of the suspension of Poland's voting rights within the bloc.

However, any possible sanctions would need unanimous support of all EU members -- apart from Poland -- and Orban's government has said Budapest will use its veto.

Last month Orban said during a Hungarian radio interview that "if someone attacks Poland, they attack the whole of Central Europe".

Brussels is however hoping the start of proceedings will have significant symbolic power.

The EU is also suing Hungary over Budapest's crackdown on universities and civil society groups that receive foreign funding.

The legislation is seen as targeting Hungarian-born financier and philanthropist George Soros, who funds non-governmental organisations throughout central and eastern Europe.

In power with a sweeping majority since 2010, 54-year-old Orban is tipped to easily win a third consecutive term in office at a general election expected in April.

In a campaign letter to supporters Tuesday he said the vote would decide whether Hungary would remain "a country of Hungarians...or a country of immigration".