The European Union will not renegotiate post-Brexit trade arrangements in Northern Ireland but wants to ease supply issues there, commission Vice-President Maros Sefcovic said on Friday on a tour of the UK province. 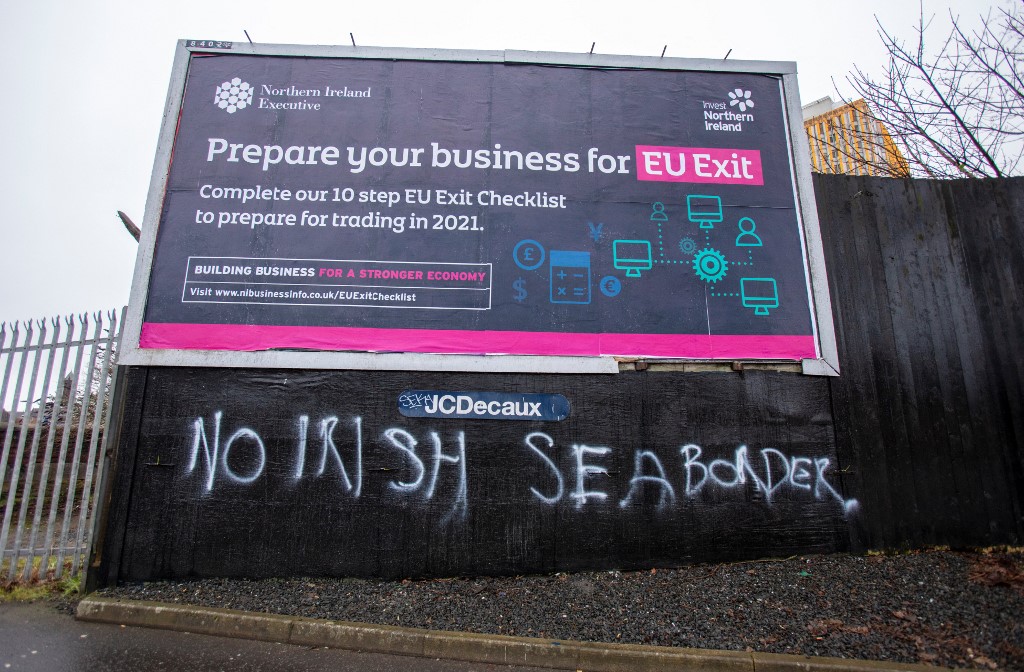 Graffiti in a loyalist area of south Belfast against an Irish sea border is seen on February 2, 2021. (File photo: AFP)

Sefcovic said the so-called Northern Ireland protocol was "the only solution" allowing trade between the UK and EU following Britain's withdrawal from the bloc's single market and customs union at the start of the year.

It mandates checks on goods crossing the Irish Sea from mainland Britain -- England, Scotland and Wales -- and was agreed by London last year as part of its drawn-out divorce from the EU.

"A renegotiation of the protocol -- as the UK government is suggesting -- would mean instability, uncertainty and unpredictability in Northern Ireland," Sefcovic argued in a speech at Queen's University Belfast.

"Instead, let's see what can be done to further ease the supply of goods," he added, in a nod to business and trading issues that have emerged since the arrangements came into force on January 1.

"The protocol is not the problem. On the contrary, it is the only solution we have. Failing to apply it will not make problems disappear, but simply take away the tools to solve them."

Sefcovic's comments come the day after the leader of Northern Ireland's biggest party suspended cooperation with Dublin and warned he might collapse its devolved government in protest at the post-Brexit rules.

Democratic Unionist Party (DUP) leader Jeffrey Donaldson demanded "significant and substantial changes" to the protocol, warning the province's political institutions "will not survive a failure to resolve the problems" it has caused.

The protocol introduced the checks on goods arriving into Northern Ireland from mainland Britain to stop items entering the EU by the backdoor via Ireland.

It is also designed to avoid customs checks on a hard border with Ireland -- another key part of the 1998 peace deal that largely ended three decades of conflict in the north of the island.

But pro-British unionists say the port checks have hit business and trade, and altered Northern Ireland's status within the wider UK, putting a border in the Irish Sea.

Earlier this year, opposition erupted into some of the worst unrest in the province in recent years.

Calling for compromise from all sides, Sefcovic said Brussels would "continue looking for solutions to minimise the effects of Brexit" on people's lives.

But he warned they would never be removed entirely, "such are the consequences of Brexit and of the choices of the UK Government".

London, which earlier this week said it would indefinitely extend a grace period on implementing some checks, reiterated Friday its calls for "significant changes" to the protocol to make it "durable for the future".

"We continue to engage with the EU to secure the changes that we think are needed," a spokesman for Prime Minister Boris Johnson said.