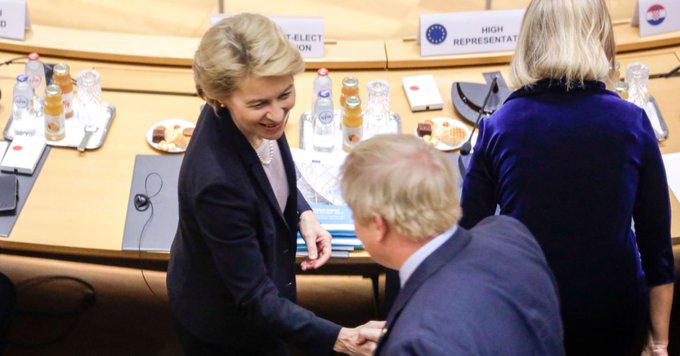 An EU spokesman said the president of the European Commission would meet Johnson for the first time since taking up her post and also give a speech at the London School of Economics.

A spokesman for Johnson confirmed: "There's a bilateral meeting next Wednesday at Downing Street."

No details were released about the agenda for the talks, but Brussels is keen to begin preparations for post-Brexit trade negotiations as soon as possible.

Von der Leyen's commission and her chief negotiator are drawing up a mandate which, if approved by EU leaders, would set out the bloc's hopes for an ambitious agreement.

But time is limited.

Britain is due to leave the European Union on January 31 and the post-Brexit transition -- during which trade will continue under EU rules -- will last only until the end of 2020.

Johnson must decide by July whether he wants to ask for the transition to be extended -- and, if so, whether by one or by two years -- and in any case insists he will not do so.

Comprehensive trade deals of the kind the EU enjoys with Canada, Japan and Singapore have so far taken between six and eight years to agree.

But some officials hope that a bare bones arrangement can be reached this year to avoid massive disruption and economic damage when Britain leaves the bloc.