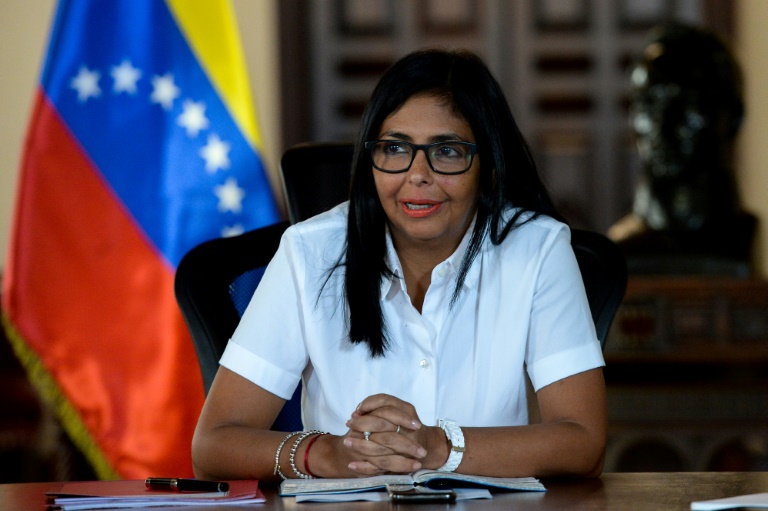 Venezuela's new vice-president Delcy Rodriguez speaks during a meeting with members of the new cabinet at the Foreign Ministry in Caracas on June 15, 2018 (Photo: AFP)

The EU on Monday hit the Venezuelan vice-president and 10 other officials with sanctions over rights abuses and irregularities in the re-election of President Nicolas Maduro, which the bloc condemned as "neither free nor fair".

Vice-President Delcy Rodriguez is the most senior member of Maduro's regime targeted by the travel bans and asset freezes, while other top cadres are sanctioned for grave human rights transgressions including torture.

The 28 EU states pledged last month to "swiftly" punish Caracas with sanctions over the May reelection of Maduro, which returned him to office until 2025. It was boycotted by the main opposition and denounced as a sham by the United States and many of Venezuela's Latin American neighbours.

"The persons listed are responsible for human rights violations and for undermining democracy and the rule of law in Venezuela," the European Union said after its 28 foreign ministers backed the move at a meeting in Luxembourg.

"The elections held in Venezuela on 20 May 2018 were neither free nor fair and their outcome lacked any credibility as the electoral process did not ensure the necessary guarantees for them to be inclusive and democratic."

The EU also called for fresh presidential elections in Venezuela in line with international standards and for the release of political prisoners.

In January, Europe added seven senior Venezuelan officials including the interior minister to its sanctions blacklist, after earlier enforcing an embargo on weapons and equipment that could be used for political repression.

Alongside Rodriguez, former vice-president Tareck El Aissami is also sanctioned for his role overseeing the Venezuelan intelligence service, where the EU said he was responsible for "serious human rights violations... including arbitrary detention, politically motivated investigations, inhumane and degrading treatment and torture".

The UN rights chief on Friday called for an international investigation of atrocities in Venezuela, condemning the government's refusal to provide security officers over the killing of civilians.

Venezuela's economy has collapsed into chaos under Maduro since 2013, with falling oil prices leading to chronic shortages of food and medicine and hundreds of thousands of people fleeing the country.