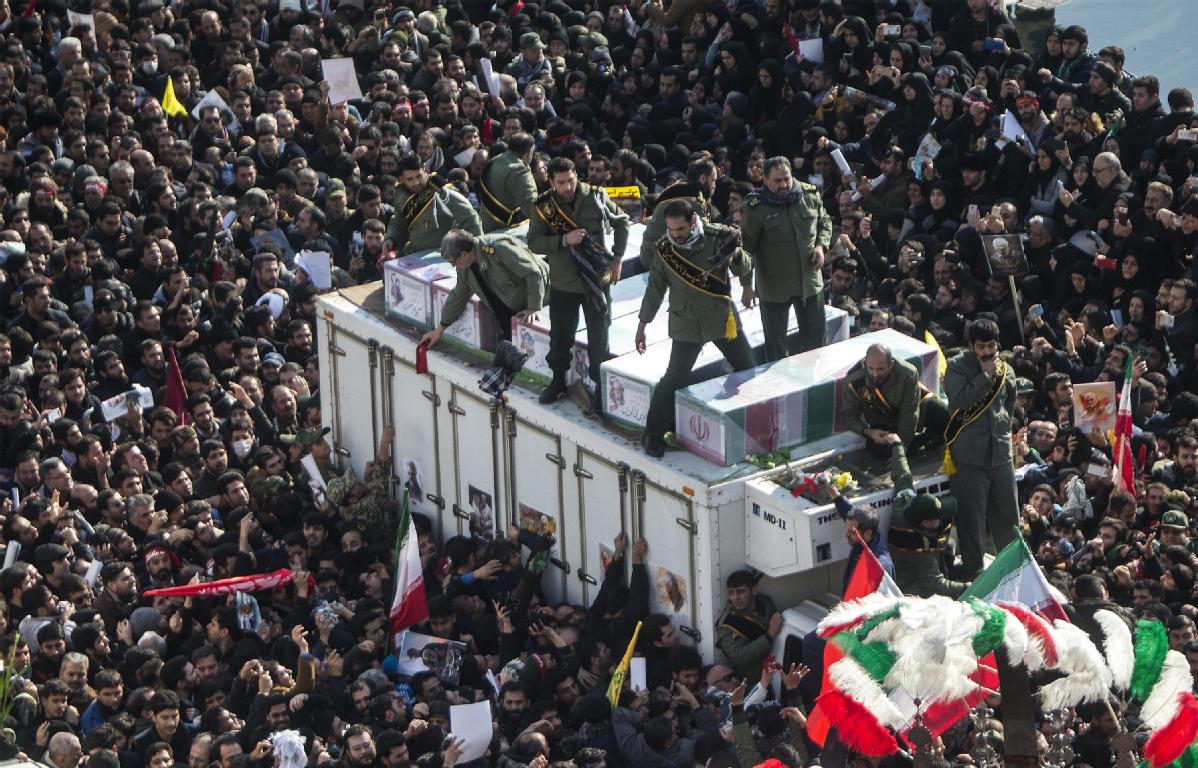 Mourners attend the funeral procession on Monday in Teheran for Iranian General Qasem Soleimani and his comrades, who were killed in Iraq in a US drone strike on Friday. (Photo: Xinhua)

European Union leaders are trying to help defuse the high tensions between Iran and the United States following the US assassination of Iranian General Qasem Soleimani in a military drone strike in Iraq on Jan 3.

The leaders of the EU and its member states have called for both countries to exercise restraint while the bloc tries to show some balance for a possible role as a mediator.

European Commission President Ursula von der Leyen said on Monday: "It is important to halt the cycle of violence so that one more action does not give rise to the next one, and instead space is again created for diplomacy."

In a statement, she said Europe has a special responsibility and is talking to all those involved.

She expressed her concern over Iran's announcement that it will no longer respect the limits on its nuclear program set by the internationally brokered Joint Comprehensive Plan of Action.

"From the European viewpoint, it is important for Iran to return to the nuclear deal. We have to convince Iran that it's also in its own interest," she said.

EU High Representative for Foreign Affairs and Security Policy Josep Borrell will convene a meeting of EU foreign ministers on Friday to coordinate their views.

"We call on all parties to exercise utmost restraint and responsibility. The current cycle of violence in Iraq must be stopped," they said.

Borrell had talked to Iranian Foreign Affairs Minister Javad Zarif on Sunday and invited him to Brussels to discuss the crisis. But there is no indication that Zarif has accepted the invitation or will attend the EU foreign ministers' meeting on Friday.

Germany and Britain criticized US President Donald Trump for threatening to attack Iranian cultural sites and impose sanctions on Iraq following a vote by the Iraqi Parliament on Sunday to expel US troops from the country.

German Foreign Minister Heiko Maas, whose country opposed the US invasion of Iraq in 2003, said on Monday that threatening Iraq with sanctions is "not very helpful".

"I think the right way is to convince Iraq not with threats but with arguments," he said.

"This action has not made it easier to reduce tensions. I made this point clearly to @SecPompeo as well," he said in a tweet on Friday, referring to the assassination of Soleimani in views expressed to US Secretary of State Mike Pompeo.

The Guardian newspaper in the UK quoted Johnson's spokesman as saying on Monday that there were "international conventions in place that prevent the destruction of cultural heritage", after Trump's tweet threatening to hit the cultural sites in response to any Iranian retaliation.

NATO Secretary-General Jens Stoltenberg on Monday said that it is imperative that Iran does not acquire a nuclear weapon. But he stressed that the killing of Soleimani was a decision made by the US, and not by either the transatlantic security alliance or the coalition against the Islamic State terror group.

On Sunday, hundreds of people demonstrated outside the US embassy in Brussels to condemn the killing of the Iranian general.

Pompeo has criticized European nations for a lack of support for the recent US actions.

"Frankly, the Europeans haven't been as helpful as I wish that they could be," he told Fox News on Friday, describing his talks with European allies about the targeted killing of Soleimani.

Carl Bildt, a former Swedish prime minister and frequent commentator on international relations, said in a tweet on Sunday that "the EU is doing what it can to prevent even further escalation between US and Iran, although I fear its efforts are seriously undercut by what's been happening".

It is widely believed that Trump's withdrawal of the US from the nuclear agreement with Iran－struck with the US and other world powers in 2015－and the subsequent reimposition of sanctions on Iran have triggered the new round of hostilities between the two countries.

Bildt, in another tweet on Sunday, said that Trump's decision to leave the nuclear deal has resulted in insecurity in the entire Persian Gulf region, more hard-line forces ascendant in Teheran, Iran's restarting of its nuclear activities and Iraq's turn against the US presence.

On Tuesday, 40 people were killed in a stampede at the funeral ceremony of Soleimani in the Iranian city of Kerman, with 213 others injured, local media reported.