Brussels（People's Daily）- European Union foreign and security policy chief Federica Mogherini hailed the signing by 23 of its members of the European Union of a joint notification on the Permanent Structured Cooperation (PESCO) as a historic moment in European defense.

The joint notification is the first formal step to set up the PESCO. It sets out the principles of the PESCO, in particular underlining that the "PESCO is an ambitious, binding and inclusive European legal framework for investments in the security and defense of the EU's territory and citizens,” according to a statement of  the Council of the European Union.

The members signed a list of commitments which include “regularly increasing defense budgets in real terms” as well as “devoting 20 percent of defense spending to procurement and 2 percent on research and technology,” the statement said.

Participation in PESCO is voluntary for all of the EU's 28 member states. All EU countries except Ireland, Denmark, Malta and Portugal signed the pact. The UK, which is scheduled to leave the EU in 2019, is not part of PESCO but can still choose to take part in certain aspects even after Brexit - if that participation is of benefit to the entire EU.

Those who didn't sign initially can still join at a later date and countries not living up to their expected commitments could be kicked out of the group, according to the statement. Countries that are not included in the EU can also take part in specific missions, but they will be allowed to make decisions.

France and Germany proposed the initiative last year as part of their efforts to breathe new life into the European project after the UK voted to leave the bloc. The UK’s impending departure made it easier to get the project off the ground as London has traditionally been skeptical about EU military cooperation, seeing NATO as the main vehicle for common European defense efforts.

With the notification signed, a final decision to launch the defense cooperation framework is expected to be announced during the next meeting of EU leaders in December.

Most analysts hesitated on what PESCO can achieve owing to the dispute between Berlin and Paris. Germany wanted the pact to include as many countries as possible while France wanted it to be as militarily ambitious as possible, the Financial Times reported.

“Big noise on stairs, nobody coming down,” – the old Chinese saying also applies aptly to the EU’s latest scheme PESCO, said Nick Witney, a senior policy fellow at the European Council on Foreign Affairs, in an analysis published recently.

PESCO was always going to be tricky to implement, Witney added.

“How were the sheep to be sorted from the goats without antagonizing the goats, and licensing them to do nothing? But declaring every goat a sheep serves no useful purpose, and actually makes the achievement of real-world results more laborious and uncertain,” concluded Witney. 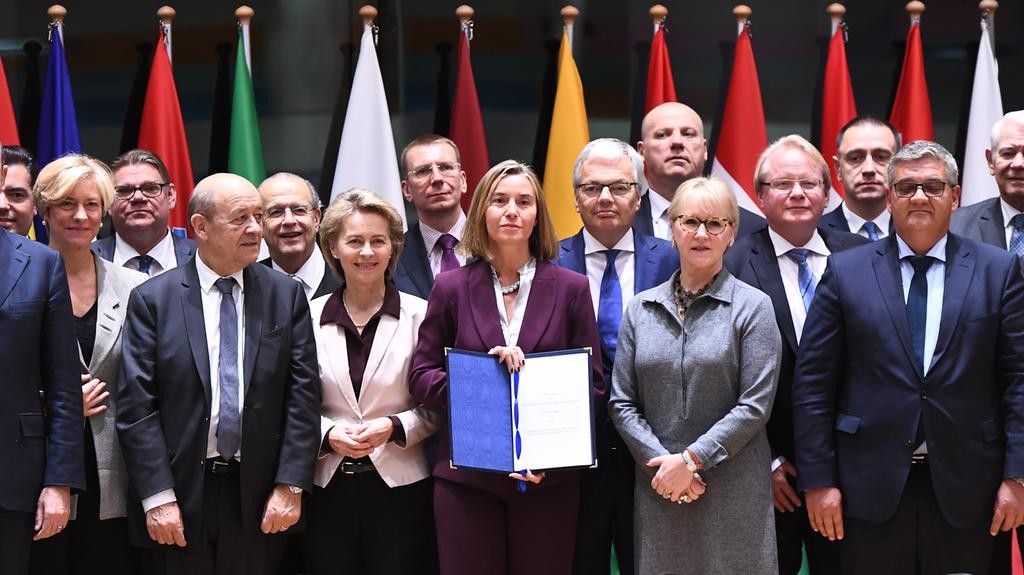