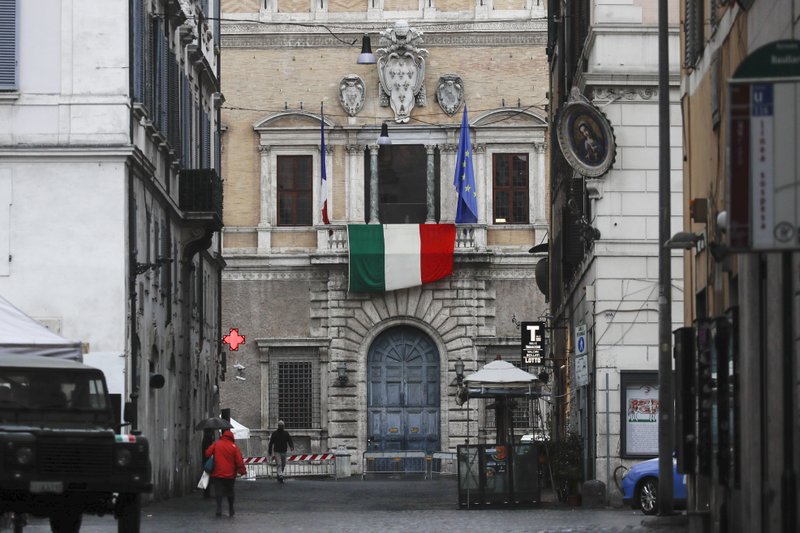 The Italian flag hangs from the balcony of the French Embassy in Rome, Friday, March 27, 2020. (Photo: AP)

As the coronavirus claims lives, ruins livelihoods and wreaks economic havoc, tensions are rising between European Union countries over how best to respond as the pandemic overwhelms some member nations, once more raising troubling questions about the EU’s ability to stand united in times of crisis.

Almost 16,000 people infected with the virus have died in Europe. Over a quarter of a million had tested positive, as of Friday. Countries hit especially hard, like Italy and Spain, are imploring their partners to do more, particularly on the economic front, and to do it now.

“The consequences of COVID-19 should be faced not in the coming months but tomorrow morning,” Italian Prime Minister Giuseppe Conte said after a summit of EU leaders late Thursday, according to Italian media.

“We are facing the worst crisis of our generation. The future of the European project is at stake. We have to choose between a coordinated and supportive EU and individualism,” Spanish Prime Minister Pedro Sanchez tweeted Friday. “We call for a common response to this emergency. Let’s ensure a fair recovery.”

Much as mass migration to Europe in recent years left Italy and Greece feeling abandoned by EU countries that weren’t inundated with new arrivals, the coronavirus rift has exposed an old north-south divide. Often, it’s about comparative wealth and the way European money is used.

In this case, an alliance of nine countries - among them Italy, Spain and France - want to throw all the EU’s economic might into fighting the virus and damage from the disruption it’s caused as soon as possible. But nations like Germany and the Netherlands want to keep a little powder dry, to have something in reserve should things get even worse.

The Netherlands insists that the best way to proceed is through a careful analysis of the virus threat and when it might subside, as well as recommendations on how to move forward in terms of lifting health restrictions and spurring economic recovery.

But after Thursday’s summit, Portuguese Prime Minister Antonio Costa slammed remarks in news reports attributed to Dutch Finance Minister Wopke Hoekstra that Spain’s government should be investigated for claiming it doesn’t have the funds to cope with the coronavirus without help.

“This kind of talk is repugnant in the context of a European Union. That’s exactly the right word: repugnant,” Costa said. He said Hoekstra’s idea was “small-minded” and “utterly undermines the spirit of the EU and is a threat to the EU’s future.”

“If we don’t show respect for each other, and if we don’t understand that when faced with a common challenge, we have to be able to respond as one, then nobody gets what the EU is all about,” Costa said.

A lot has been done at the European level already to deal with the health and economic crisis. The EU’s executive commission gave countries the green light to break long-cherished budget and debt rules, to pump state aid into collapsing businesses and overwhelmed hospitals. It’s also earmarked billions of euros in coronavirus aid.

Europe’s finance ministers agreed in principle this week to let partners in distress borrow up to 2% of their gross domestic product from the European Stability Mechanism, a bailout fund set up during the debt crisis a decade ago with lending assets of 410 billion euros ($444 billion.)

But the nine rapid-economic action countries want the immediate rollout of “coronabonds,” shared debt backed by all. This would let even those hardest-hit nations borrow at sustainably low interest rates as their spending balloons on hospitals, measures to pay wages and to stop bankruptcies. Germany and the Netherlands do not agree.

Many early responses to the virus at the national level - uncoordinated actions like the partial closure of borders, some of which have disrupted European medical and food supply chains, or the failure of nervous governments to share masks with countries in need - also seem to have undermined mutual trust.

It’s a commodity that once lost could prove very hard to restore, particularly among expectant citizens.