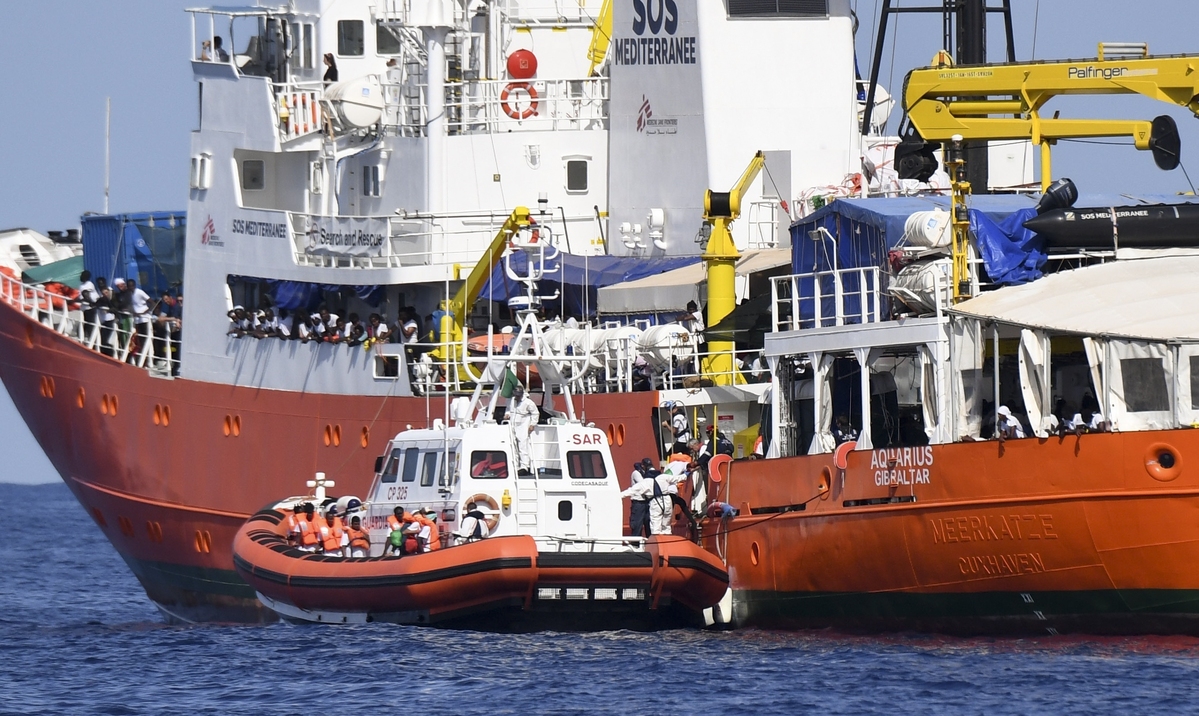 An Italian Coast Guard boat approaches the Aquarius ship as migrants are being transferred, in the Mediterranean Sea, on Tuesday. (Photo/Agencies)

French President Emmanuel Macron blasted Italy on Tuesday for "irresponsibility" after it turned away a rescue boat carrying African migrants, exposing deep tensions in the European Union over the issue.

The decision by Italy to stop the Aquarius rescue boat landing on its shores at the weekend with 629 migrants on board has created the first serious clash between the country's new populist government and its EU partners.

During a cabinet meeting on Tuesday, Macron accused Italy's leaders of "cynicism and irresponsibility" and said they had broken international maritime law by refusing the boat the right to dock.

"In cases of distress, those with the closest coastline have a responsibility to respond," spokesman Benjamin Griveaux said in unusually harsh criticism by Paris of its southern neighbor.

"Italy cannot accept hypocritical lessons from countries that have always preferred to turn their backs when it comes to immigration," Conte said in a statement.

Italy also received backing from Hungary's right-wing Prime Minister Viktor Orban, who is a friend of Salvini and is known for his anti-immigrant rhetoric.

For years, Italy has pleaded with its EU partners for help with a massive influx of arrivals from Africa that has seen 700,000 people cross the Mediterranean and land in the country since 2013.

Under existing rules, countries where migrants first arrive are required to process their asylum requests, placing the burden on Italy in particular, as well as fellow southern countries Greece and Spain.

EU leaders have set an end-of-June deadline for an overhaul of these so-called "Dublin rules", but talks have been deadlocked for two years and there is little sign of a breakthrough.

Attempts to distribute refugees around the bloc's 28 member states have consistently failed, with the surge in migrants fueling anti-immigration, far-right political parties across Europe.

"We cannot continue the political ping-pong on who is finally responsible for shouldering the responsibility of migration or protecting external borders, because we all are," EU Migration Commissioner Dimitris Avramopoulos said on Tuesday in Strasbourg.

The new government in Rome, which includes the far-right League party, came to power pledging to stop the boats and carry out mass deportations that could see hundreds of thousands of illegal immigrants expelled.

Those 629 migrants, including 11 children and seven pregnant women, have been afloat in the central Mediterranean aboard the Aquarius rescue ship since Sunday, when both Italy and Malta refused to let them dock.

Spain unexpectedly offered on Monday to take in the group of mainly sub-Saharan Africans, who were picked up off the Libyan coast over the weekend. But the Aquarius is heavily overcrowded, making the four-day trip to Spain particularly perilous.

To resolve the problem, two Italian boats moved alongside the Aquarius on Tuesday to share out the migrants before heading west through what are forecast to be stormy seas.

The convoy set sail at around 9 pm, according to a spokeswoman for the Franco-German charity SOS Mediterranne which is operating the Aquarius.

It will take the Aquarius about 10 days to make the trip to Spain and back.