WORLD EU to work with remaining parties to save Iran nuclear deal: Borrell

EU to work with remaining parties to save Iran nuclear deal: Borrell

EU chief diplomat Josep Borrell reaffirmed his determination to continue to work with Russia, the other remaining participants of the Joint Comprehensive Plan of Action (JCPoA) and the international community to preserve the agreement. 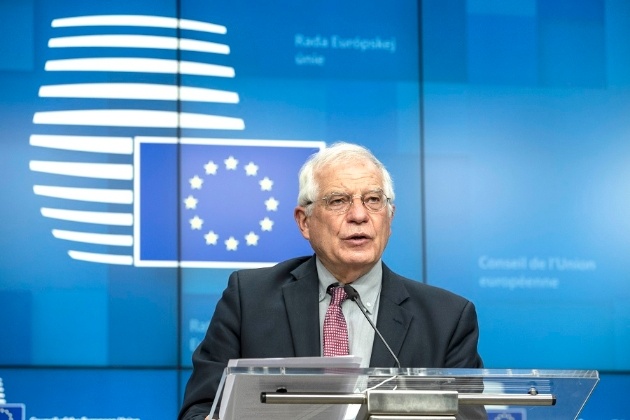 EU's High Representative for Foreign Affairs and Security Policy Josep Borrell speaks during a press conference after a meeting of the EU Foreign Affairs Council at the EU headquarters in Brussels, Belgium, on July 13, 2020. (European Union/Handout via Xinhua)

Josep Borrell, the High Representative of the European Union (EU) for Foreign Affairs and Security Policy, has affirmed that the bloc will work to preserve the Iran nuclear deal after the United States sought to reimpose sanctions on Iran.

He made the remarks in a telephone conversation with Russian Foreign Minister Sergey Lavrov on Thursday, the EU's external action service (EEAS) said in a press release on Friday.

Talking to Lavrov, Borrell reaffirmed his determination to continue to work with Russia, the other remaining participants of the Joint Comprehensive Plan of Action (JCPoA) and the international community to preserve the agreement.

The EU's external action service announced on Friday that a meeting of the Joint Commission of the JCPoA will take place in Vienna, Austria on Sept. 1, attended by delegates of China, France, Germany, Russia, the United Kingdom and Iran.

Early on Thursday, the US sent a letter to the UN Security Council requesting to initiate the "snapback" mechanism, which allows a participant to the JCPoA to seek the reimposition against Iran of the multilateral sanctions lifted in 2015 in accordance with resolution 2231, adopted by the UN Security Council.

Borrell claimed in a statement on Thursday night that the US had lost ground to trigger the "snapback" mechanism as it withdrew from the agreement in 2018.

"As coordinator of the JCPOA Joint Commission I will continue to do everything possible to ensure the preservation and full implementation of the JCPoA by all," said Borrell, underlining that the JCPoA remains a key pillar of the global non-proliferation architecture, contributing to regional security.

The JCPoA was inked by Iran in July 2015 with Britain, China, France, Germany, Russia and the United States, together with the EU.

The US, under President Donald Trump, withdrew from the JCPoA on May 8, 2018, and unilaterally reimposed sanctions on Tehran, despite objections from the international community.