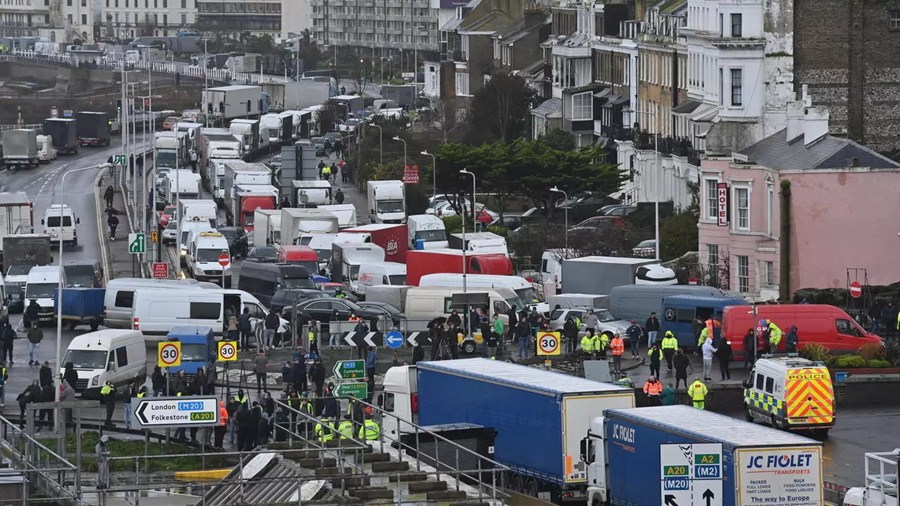 Drivers and their vehicles were still stick at the port of Dover, in Kent, south east England. (Photo: AFP)

The EU transport commissioner warned Thursday that 10,000 European truckers were struggling to return from Britain and criticised France for imposing coronavirus restrictions on them.

Several countries around Europe and the world imposed bans on travel from the UK this week after the discovery of a new strain of the virus.

"We issued a communication appealing for proportional, non-discriminatory measures and the lift of any restrictions for transport workers," Adina Valean said.

"I deplore that France went against our recommendations," she tweeted.

But France's minister for European Affairs, Clement Beaune, denied this, responding angrily in a tweet replying to a British journalist.

"We have exactly followed the EU recommendation (opening with tests) and are now more open than other European countries, having worked jointly with the UK authorities on this protocol."

France's decision to restrict traffic has had the most impact, with trains and ferries across the Channel halted for 48-hours huge freight traffic jams built up in southeast England.

"Around 10,000 truck drivers are seeking to get back in the EU. Other thousands are already in the Dover area in their vehicles," Valean, the European commissioner for transport, said.

"We worked hard these days to unblock a crisis between two European countries, France and the UK," she said. "I am pleased that, at this moment, we have trucks slowly crossing the Channel."

On Tuesday, the European Commission advised member states should drop the blanket ban, and France agreed to allow in drivers if they had negative Covid-19 tests.

But Brussels had suggested exempting transport workers from this restriction.

"And I want to thank UK authorities that they started testing the drivers at a capacity of 300 tests per hour," Valean said.

And she compared the situation to the breakdown in coordination between European capitals in March that hampered early efforts to contain the virus "when the supply chains were interrupted."