EU tries to ease German and Italian concerns over migration 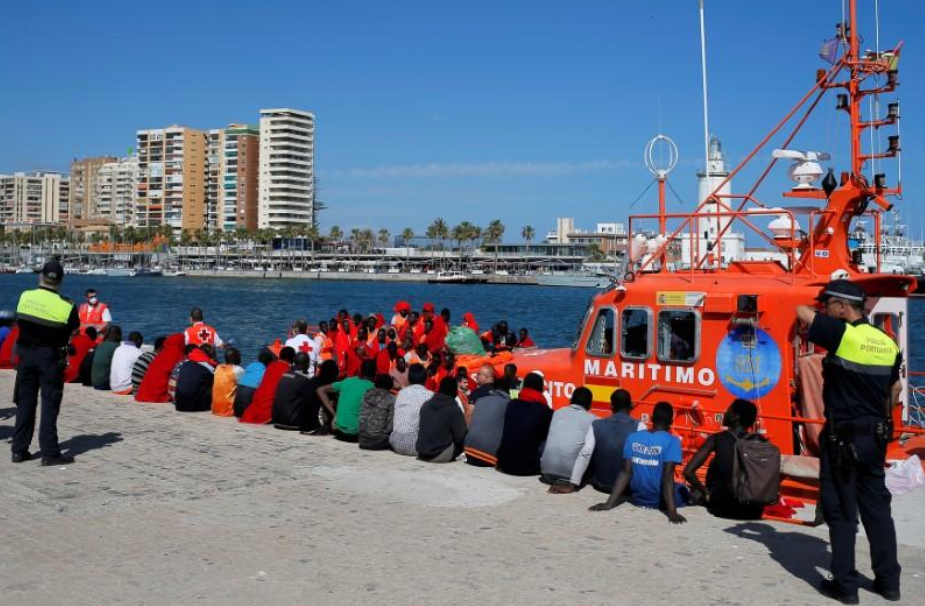 Migrants, part of a group intercepted aboard two dinghies off the coast in the Mediterranean Sea, rest after arriving on a rescue boat at the port of Malaga, Spain June 9, 2018 (Photo: Reuters)

European Union leaders will try to reassure Germany and Italy over migration at a summit next week as a stand-off in Berlin threatens Chancellor Angela Merkel’s ruling coalition.

The EU could take steps to stop asylum seekers moving on from the country in which they are registered and start deciding asylum requests at centers to be established beyond EU borders in the future, according to a draft summit statement.

The proposed steps come ahead of the June 28-29 summit in Brussels at which EU leaders will attempt to agree on a joint migration policy three years after more than 1 million people arrived in Europe, causing a crisis for the union.

Their joint draft statement is not public and its wording might change. But it showed the bloc is trying to accommodate a new, anti-establishment government in Italy, as well as Berlin where Merkel’s coalition partner issued an ultimatum for an EU-wide deal on migration.

If the summit fails to reach a satisfactory outcome, Berlin would issue a unilateral ban on refugees already registered in other EU states from entering the country, said the junior governing Christian Social Union that has the interior ministry.

German police data suggest any such ban would only affect several hundred people a month and hence have no big impact on the overall number of refugees in Germany.

The EU border agency Frontex said more than 90 percent of current arrivals in Italy, Greece and Spain register for asylum there. Many still often go north, including to Germany. This “secondary movement” violates EU law but has been widespread.

“Member States should take all necessary internal legislative ... to counter such movements,” the text said in an indirect response to German Interior Minister Horst Seehofer.

Merkel opposes the proposal that comes from a party facing a tough vote in its home base in Bavaria in October against a resurgent far-right Alternative for Germany (AfD), which has advocated harsh anti-immigration line.

The AfD on Tuesday accused the CSU of copying its ideas on how to deal with the migrant crisis.

French President Emmanuel Macron and Merkel called in a joint statement on Tuesday for a European solution on migration and said secondary movement must be tackled.

The EU is bitterly divided over migration.

It has struggled to reform its internal asylum rules, which broke down in 2015, and has instead tried to tighten its borders and prevent new arrivals. To that end, it has given aid and money to countries including Turkey, Jordan, Libya and Niger.

Next week, EU leaders will also agree to look into opening “disembarkation platforms” in regions such as north Africa to decide asylum requests before people get to Europe.

European capitals from Rome to Budapest advocate such centers but concerns that processing people outside EU borders could violate the law have long blocked any such initiative.

“Such platforms should provide for rapid processing to distinguish between economic migrants and those in need of international protection, and reduce the incentive to embark on perilous journeys,” the draft statement said.

Italy closed its ports to rescue ships and said it prefers Frontex to work in Africa to prevent people from coming rather than patrol the Mediterranean and rescue those in distressed boats.

Tripoli already runs migrant camps in Libya where the EU pays the UN migration and refugee agencies to help resettle people to Europe legally or deport them to other African countries.

But reform of EU internal asylum rules is stuck. Southern and wealthy central states demand that all EU members host some new arrivals but eastern states refuse leading to a stalemate.

In evidence of that division, Czech Prime Minister Andrej Babis said on Tuesday the CSU demand for internal border checks is unacceptable.

Swedish Prime Minister Stefan Lofven said it would be “very difficult to reach a solution” on hosting asylum seekers next week. There is, however, agreement on strengthening external borders and bringing together the border protection databases.

“So much progress has been made, we can’t let all slip away now. So we need to give key countries something to keep them on board,” one EU official said of the proposed text.