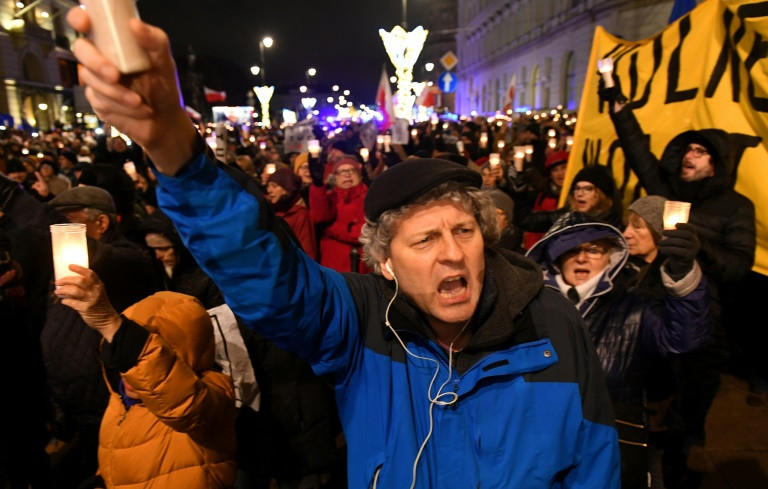 The European Commission launched unprecedented disciplinary proceedings against Poland on Wednesday over its highly controversial judicial reforms which Brussels says threaten the rule of law.

In a major escalation against one of the EU's biggest states, Brussels triggered article seven of the EU treaty over what it sees as "systemic threats" to the independence of the Polish judiciary from the nation's right-wing government.

Never before used against an EU member state, the proceedings can eventually lead to the "nuclear option" of the suspension of a country's voting rights within the bloc.

The row underlines growing east-west tensions within the European Union, with former Soviet bloc states like Poland and Hungary refusing to toe the Brussels line on several thorny issues including judicial and media independence as well as immigration.

"It is with a heavy heart that we have decided to initiate Article 7.1. But the facts leave us with no choice," Commission Vice President Frans Timmermans told reporters in Brussels.

The Dutch commissioner said that 13 laws adopted by Poland in the space of two years had created a situation where the government "can systematically politically interfere with the composition, powers, the adminstration and the functioning" of judicial authorities.

But Timmermans gave Warsaw three months to remedy the situation, saying Brussels could withdraw the measures if it did.

European Commission chief Jean-Claude Juncker said on Twitter it was "a difficult day for Poland, but also for the EU" and said he would meet Poland's new prime minister Mateusz Morawiecki early next month.

EU President Donald Tusk, a former Polish prime minister and arch-rival of the governing Law and Justice (PiS) party, urged Warsaw to "come to its senses" and "not seek a conflict at all cost in a case where it is simply not right".

Poland's right-wing PiS government began making changes to the judiciary after coming to power in late 2015 and says the reforms are needed to combat corruption and overhaul the judicial system still haunted by the communist era.

Brussels has repeatedly warned Warsaw that it views the changes as a threat to the democratic principles and rule of law Poland signed up to when it joined the European Union.

"Poland deplores the European Commission's launch of the procedure foreseen in article seven, which is essentially political, not legal" in nature, the Polish foreign ministry said in a statement, adding that it risks undermining "mutual trust".

Morawiecki, who last week insisted on his country's "absolute right" to reform its own judicial system, struck a more conciliatory note while insisting on Warsaw's sovereignty in the matter.

"Poland is as devoted to the rule of law as the rest of the EU. Current judiciary reform is deeply needed," he wrote on Twitter.

"The dialogue between the Commission and Warsaw needs to be both open and honest. I believe that Poland's sovereignty and the idea of United Europe can be reconciled."

The initial phase set in motion by the EU's commission, the bloc's executive arm, allows member states to "determine that there is a clear risk of a serious breach" of the rule of law.

Such a ruling would need the backing of 22 states out of 28.

Any possible sanctions would only come at a second stage and would need unanimous support of all EU members -- apart from Poland.

Hungary has already said it would veto such a move, making sanctions unlikely, but Brussels is hoping the start of proceedings will have significant symbolic power.

Hungarian Deputy Prime Minister Zsolt Semjen called Wednesday's move a "grave attack on Polish sovereignty" and vowed that Budapest would oppose it "in all forums", in comments to the state news agency MTI.

As well as heavy criticism from Brussels, the reforms have sparked street protests in Poland and concern from the US State Department.

Warsaw and the EU have clashed over the reforms for more than a year with little result. Poland has refused to implement the "recommendations" from Brussels, defending its right to clean up what it says is a corrupt judicial "caste".

In the face of this defiance the commission has been threatening to trigger article seven for months, but given that the threat of sanctions is no more than theoretical, the EU is trying to come up with other ways of getting Poland to comply.

One idea is to link access to European funding for major infrastructure projects to respect for EU values and rulings, with the EU due to start talks on its next multi-year budget in April.