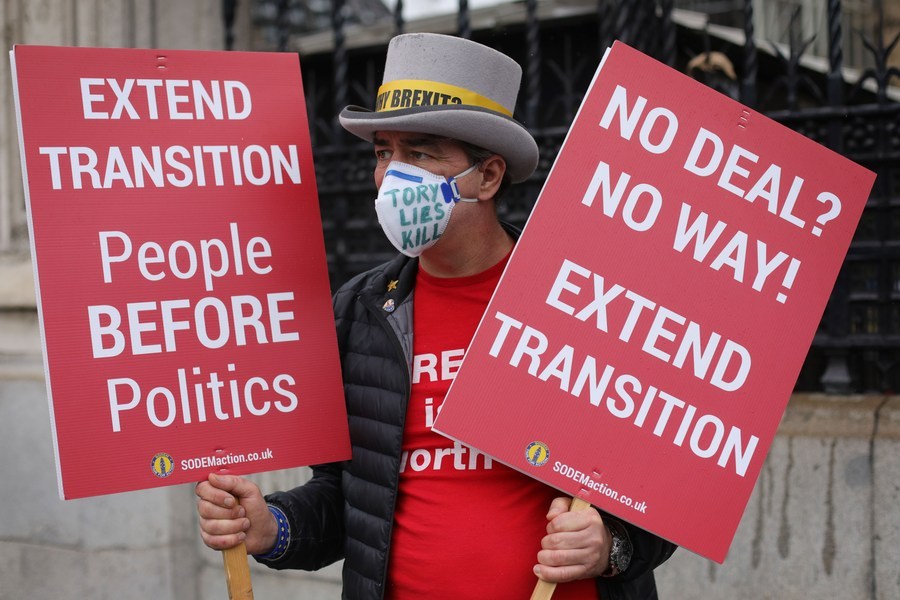 A demonstrator holds placards demanding extension of Brexit transition period outside the Houses of Parliament in London, Britain, on June 10, 2020. (Photo: Xinhua)

The European Union (EU) and Britain will come to a decision on a post-Brexit trade deal by the end of the coming weekend, European Commission President Ursula von der Leyen tweeted Wednesday evening after meeting with British Prime Minister Boris Johnson in Brussels.

"We had a lively and interesting discussion on the state of play on outstanding issues," von der Leyen said, underlining that the positions of both sides remain "far apart."

She urged EU and UK negotiating teams to immediately reconvene to try to bridge divergences.

The emergency meeting between Johnson and von der Leyen to seek a post-Brexit trade deal has ended without breakthrough as "very large gaps remain" between the two sides, British media reported late Wednesday.

"A frank discussion" was held about the "significant obstacles" that remain in the talks and "it is still unclear whether these can be bridged," Sky News quoted a Downing Street source as saying.

Johnson and von der Leyen have agreed that their negotiating teams will continue discussions over the coming days and the prime minister "does not want to leave any route to a possible deal untested," said the report.

Both leaders have agreed that a firm decision about the future of the talks should be taken by Sunday.

In a bid to unlock the stalemate in post-Brexit trade talks, Johnson and von der Leyen had made a telephone call on Monday, the second call in 48 hours.

In a joint statement issued after the phone conversation, they said that the conditions for finalizing a trade agreement "are not there due to the remaining significant differences on three critical issues: level playing field, governance and fisheries" between the two sides.

The trade negotiations are at a crucial stage as time is running out for both sides to secure a deal before the Brexit transition period expires at the end of the year.

Failure to reach a free trade agreement means bilateral trade will fall back on World Trade Organization (WTO) rules in 2021.