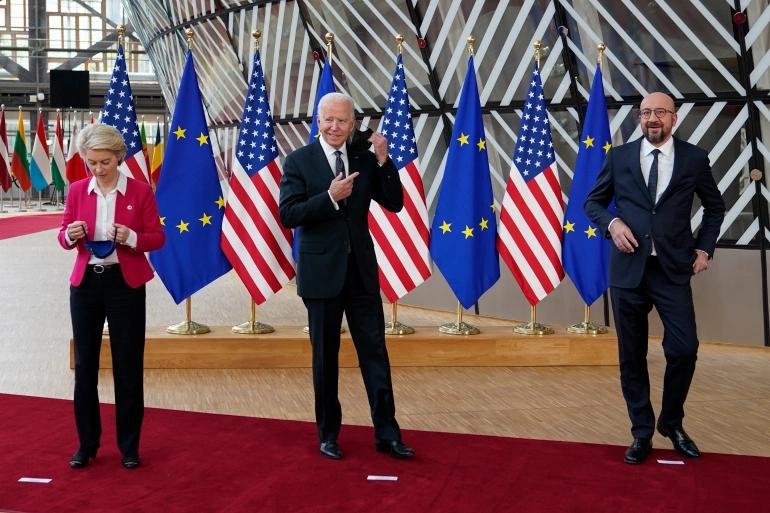 BRUSSELS, June 16 (Xinhua) -- The Chinese Mission to the European Union on Tuesday expressed opposition to a joint statement issued by leaders of the EU and the United States, dismissing it as having gone "far beyond" the norm of developing bilateral relations.

"The EU-US Summit Statement has gone far beyond the norm of developing bilateral relations," said a spokesperson for the Chinese mission. "It is filled with outdated Cold War mentality and bloc politics rhetoric. Such attempt to form small circles pitted against one another runs counter to the trend of history and does no good to regional and global peace and stability."

The spokesperson expressed strong discontent with and firm opposition to the references to China in the Statement. Taiwan, Hong Kong, Xinjiang and Tibet-related issues are China's internal affairs. The East and South China Seas concern China's sovereignty and maritime rights and interests. All these issues represent China's fundamental interests and allow no interference, said the spokesperson.

"As for who is imposing unilateral sanctions based on lies and disinformation and who is pressurizing and coercing others to keep its hegemony, the international community sees very clearly and fair-minded people can tell right from wrong," said the spokesperson.

"China is no longer like what it was in the past. The Chinese people have stood up. Intimidation will never work on us. We will stay on the course of peaceful development and at the same time, firmly safeguard national sovereignty, security and development interests," added the spokesperson.