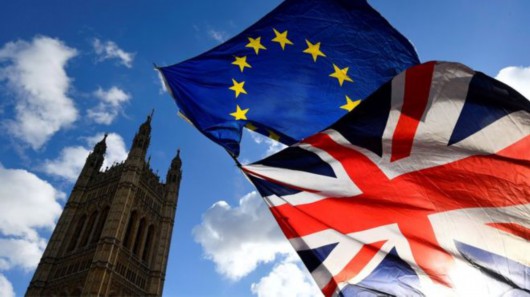 The EU's top official told Britain on Wednesday that it could lose its open access to the European market if it refused to extend post-Brexit partnership talks beyond 2020.

Ursula von der Leyen's warning to Prime Minister Boris Johnson came ahead of their first meeting in her capacity as European Commission president -- and with Britain's departure from the EU just three weeks away.

Both sides are eager to move on from the tumult and acrimony that followed Britain's decision in a 2016 referendum to end its decades-long membership of the bloc.

Johnson secured a comfortable majority in parliament in a December election and is virtually assured that his divorce deal will finally be approved by January 31.

But that leaves just 11 months until the end of 2020 for London and Brussels to agree a new economic partnership covering everything from trade to data protection rules.

"There will be tough talks ahead and each side will do what is best for them," von der Leyen said in a keynote speech at the London School of Economics, where she studied in the 1970s.

"It is basically impossible to negotiate all I have been mentioning and the other dossiers there, too. Therefore, we will have to prioritise, as long as we face that deadline of end of 2020."

Downing Street said Tuesday that Johnson would tell von der Leyen at their meeting that "there will be no extension" to the deadline.

Britain will keep following EU rules and paying its membership fees during the transition talks.

"Having waited for over three years to get Brexit done, both British and EU citizens rightly expect negotiations on an ambitious free trade agreement to conclude on time," Downing Street said.

Von der Leyen countered on Wednesday that this meant Britain would probably lose unfettered access to its closest trading partner after 2020.

"With every choice comes a consequence. With every decision comes a trade-off," she said. "The more divergence there is the more distant the partnership has to be."

She said her top priority was making sure there was no "hard exit" in which the sides walk away without any agreement at all.

The European Union has never reached a trade agreement with any of its partners in less than a year.

The bloc's deals with Canada and Singapore -- two models Britain has considered in the past -- took around nine years.

But Johnson is eager to brandish his Brexit credentials and reap what he considers to be the benefits of independence from Brussels.

Britain's refusal to align itself with the bloc on issues such as environmental standards and workers' rights could see UK companies face EU tariffs.

But it would also give Britain much more leeway in negotiating a new free trade agreement with the United States and growing countries in Asia down the line.

London's booming financial district would also be free from outside oversight that outgoing Bank of England head Mark Carney warned on Wednesday could "tie our hands".

"It is not desirable at all to align our approaches," he told the Financial Times.

Von der Leyen stressed that Brussels preferred to keep close relations that avoided disruptions to global supply chains and are "unprecedented in scope".

"We are ready to design a new partnership with zero tariffs, zero quotas, zero dumping," she said.

"And we are ready to work day and night to get as much of this done within the timeframe we have."

European lawmakers intend to pass a resolution next week urging Brussels negotiators to push for EU citizens to retain their right to live and work in Britain after 2020.

Johnson stripped the provision out of the deal that the British parliament is expected to approve Thursday.

Security minister Brandon Lewis on Tuesday insisted the rights of EU citizens to live, work, study and access benefits in Britain after Brexit would be protected.

Lewis said the scheme was "far more generous" than the offer of many European countries to British citizens but MEPs fear Britain is already rowing back on commitments to EU nationals.

Johnson's divorce deal bill stipulates that he must request a one- or two-year deadline extension by July 1. Various EU officials have urged Johnson to ask for the delay.

"We might together want to take a reconsideration of the timeframe before July 1," von der Leyen said.