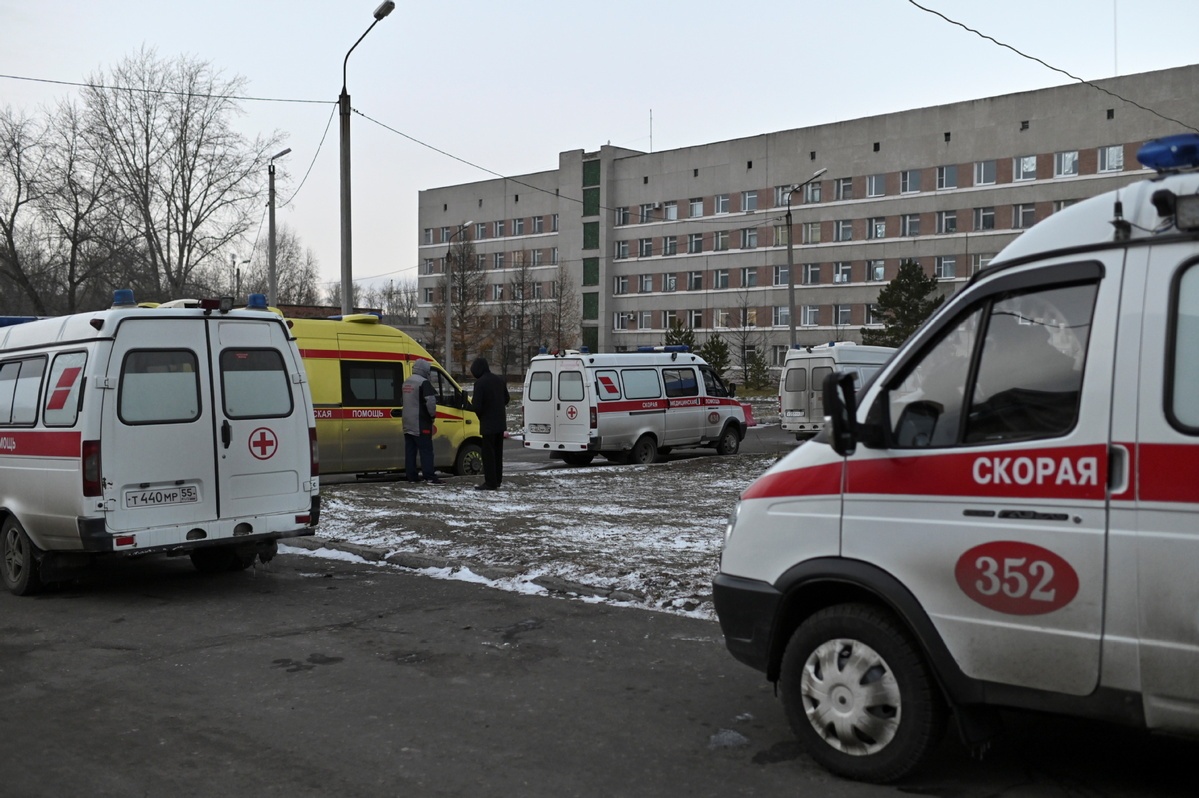 Ambulances are parked outside a hospital amid the outbreak of the coronavirus disease (COVID-19) in Omsk, Russia, Oct 28, 2020. (Photo: Agencies)

There has been a surge in deaths from the COVID-19 novel coronavirus disease across Europe with an increase of nearly 40 percent compared to the previous week.

The World Health Organization on Tuesday said Europe had reported 1.3 million new cases of infection in the past seven days, nearly half the 2.9 million reported worldwide, with over 11,700 deaths.

France, Spain, the United Kingdom, the Netherlands and Russia had seen infection cases increase by a third, according to WHO spokeswoman Margaret Harris.

"The concern... is that intensive care units in hospitals are now beginning to fill with very ill people," she warned.

Speaking to the BBC's World at One program on Tuesday, Harris said: "Across the European region we're seeing an intense and indeed alarming increase in cases and deaths."

Russia recorded another 16,550 infections on Tuesday alone, and now has the world's fourth highest number of COVID-19 cases after the United States, India and Brazil. Authorities in the country have made the wearing of face masks compulsory in all crowded places.

Italy has seen cases rise rapidly with daily infections surging to almost 22,000. Protests took place in towns and cities across the nation on Monday evening against a new round of restrictions.

President Emmanuel Macron of France is expected to announce further curbs on people's movements following the curfew measures introduced across much of the country last week.

Germany is considering closing restaurants and bars but keeping schools and nurseries open. The country has been taking in patients from its neighbor the Netherlands, where hospitals have reached their limits.

Spain announced a nationwide curfew using emergency powers, and the Czech Republic has introduced a night-time curfew, which came into effect on Tuesday for a week.

Measures being introduced are less severe than the near-total lockdowns imposed at the start of the crisis in March and April, but their economic cost is likely to be heavy.

Financial markets across Europe dipped sharply on concerns about the impact the pandemic could bring during winter.

London's FTSE 100 has slipped to its lowest level in six months as fears grow that the UK may need a national lockdown to limit the spread of COVID-19. The index fell 1.9 percent in the first few hours of Wednesday trading.

Britain's retail sales fell at their fastest pace in four months in October, according to the closely watched distributive trades survey from the Confederation of British Industry, or CBI.

It comes after a period of growth for the sector, which bounced back strongly when the UK's lockdown was first lifted in the summer.

COVID-19 has thrived among Britain's black, Asian and ethnic minority (BAME) communities because of structural race discrimination, according to a report delivered by the Labor Party.

The report's author, Doreen Lawrence, whose son Stephen was killed in a racist attack in 1993, says ethnic minorities in the United Kingdom are now paying with their lives after decades of neglect.

"Black, Asian and minority ethnic people have been overexposed, under-protected, stigmatized and overlooked during this pandemic-and this has been generations in the making," she wrote, highlighting their often low-paid work and poor housing.

"The impact of Covid is not random, but foreseeable and inevitable, the consequence of decades of structural injustice, inequality and discrimination that blights our society," she wrote.

The first generation of COVID-19 vaccines "is likely to be imperfect "and "might not work for everyone", according to the UK's Vaccine Taskforce chief, Kate Bingham.

Writing in The Lancet medical journal, Bingham said no vaccine in the history of medicine "has been as eagerly anticipated" and that "vaccination is widely regarded as the only true exit strategy from the pandemic.