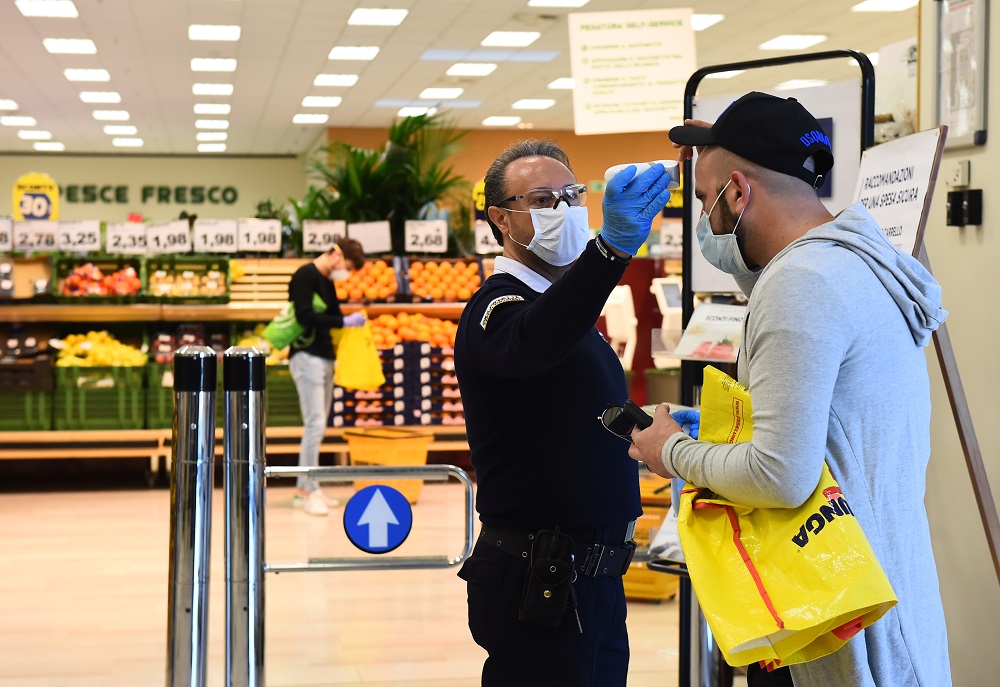 A worker checks the temperature of a customer at the entrance of a supermarket in Turin, Italy, on Tuesday, as the spread of the novel coronavirus continues.(Photo: Agencies)

A gradual reopening of businesses began taking place in some European countries on Tuesday, albeit with caution, as these countries believe they are seeing a flattening of the COVID-19 curve or a plateau.

The novel coronavirus had infected 827,180 people and claimed 81,480 lives in Europe as of Wednesday, according to the European Centre for Disease Prevention and Control.

Austria reported 14,159 cases and 384 deaths by Tuesday, according to health authorities.

"We are on track," said Chancellor Sebastian Kurz, who believed "the numbers of new infections and hospitalizations are going in the right direction". However, masks are mandatory in retail and public transport, he emphasized.

Italy on Tuesday took its first tentative steps toward reopening its economy five weeks after the national lockdown entered into force.

Italy's civil protection agency reported 2,972 new cases in the last 24 hours on Tuesday, the lowest number since March 13. The country has registered 162,488 infections, according to health authorities.

Italian Prime Minister Giuseppe Conte last Friday formally extended the coast-to-coast quarantine from April 13 to May 3. However, the new decree did allow a few businesses to reopen on Tuesday. Among them: stores selling clothes and equipment for small children, those selling products for pets, book shops, dry cleaners, and electronics stores.

Spain is flattening the curve on the spread of the virus, the government said on Tuesday. The country is handing out 10 million free masks from Monday to Thursday this week to commuters going back to work after a two-week lockdown that forced all non-essential workers to stay home.

From Monday, non-essential workers such as construction staff returned to work. Meanwhile, the rest of the country remains under lockdown until April 26.

Meanwhile, the European Commission on Tuesday urged member states to coordinate as they begin to ease lockdown measures, warning that failure to do so could result in new spikes of the outbreak.

The United Kingdom's death toll has passed 12,000 as concerns grow about fatalities occurring away from hospitals and being excluded from the daily figures.

Figures released on Tuesday revealed that a further 778 patients had died in UK hospitals during the latest 24-hour period, taking the nationwide total to 12,107. Information released by the Office for National Statistics suggested the real number is considerably higher, as this total only includes deaths in hospitals.

Russia reported 24,490 infections and 198 deaths, the anti-coronavirus crisis center reported on Wednesday. And Vladimir Nikiforov, chief infection diseases doctor of the Russian Medical Biological Agency, said the morbidity growth in Russia is to slow down by the end of this week if the pandemic follows reasonable epidemiology rules.

He proposed that countries begin development of systemic measures designed to create conditions for restoring and ensuring further economic development within the framework of some international mechanisms, such as the Supreme Eurasian Economic Council.

Julian Shea in London,Ren Qi in Moscow, Xinhua and agencies contributed to this story.