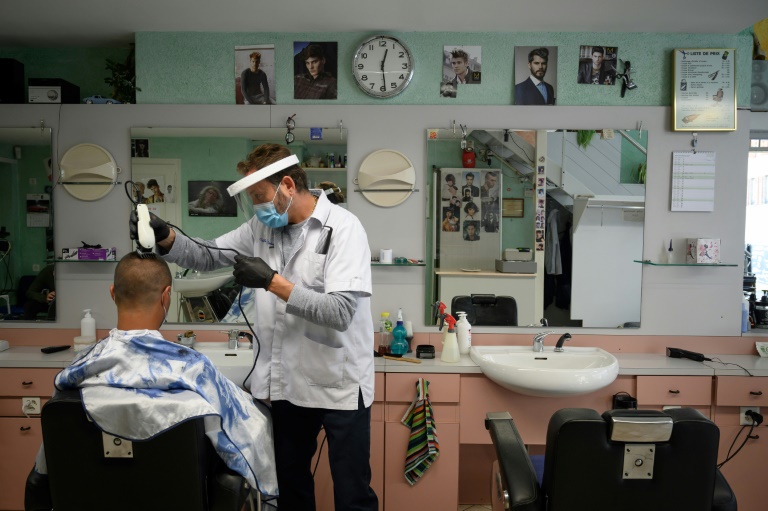 Hairdressers in Switzerland were allowed to reopen, but had to put protective measures in place. (Photo: AFP)

European countries took fresh steps towards charting a path out of virus lockdowns Monday as debates rage over how quickly to ease safety measures that are suffocating ordinary and economic life.

In Britain, Prime Minister Boris Johnson returned to work after his own battle with the respiratory disease, looking thinner and with his blond mane a bit longer.

The pandemic has killed over 206,000 people and infected nearly three million worldwide, according to official statistics, with the US hit the hardest.

But Europe's four worst-affected countries have all recently reported marked drops in their daily death tolls, raising hope that the peaks of their outbreaks have passed.

Italy and New York have laid out partial reopening plans while France and Spain are expected to follow suit this week.

In Switzerland, shops were already back in business Monday while primary students in Norway returned to school.

Yet British Prime Minister Johnson warned it was too early for the UK to ease off its month-long stay-at-home orders.

In his first public appearance in weeks, the 55-year-old said he could not "throw away all the effort and the sacrifice of the British people and to risk a second major outbreak".

More than 20,000 people have been killed by the virus in the UK, with Johnson's government still facing criticism for being slow to impose safety measures at the start of the outbreak.

Elsewhere leaders and experts are divided over how to revive badly bruised economies and free citizens from confinement without unleashing new waves of infections.

Economic forecasts warn of the worst recession in a century, with oil prices plunging amid a supply glut.

In the US, where President Donald Trump did not give his daily coronavirus briefing Sunday after complaining they were not worth the effort, states are moving at different paces to roll back confinement measures that have wiped out millions of jobs.

European governments who have already laid out plans to ease restrictions are contending with a mix of fear and impatience from different quarters of society.

In Italy, Catholic bishops are angry about an extended ban on masses, while some teachers in France fear that a planned return to school on May 11 could be too risky.

In Norway, there were mixed reactions among parents as young children returned to primary school Monday, with classes capped at 15 students for safety reasons.

"She was ready at six o'clock this morning, three hours early. She was so excited to go back," Karine Rabbe told AFP of her seven-year-old daughter, who was back to school in an Oslo suburb after six weeks of online classes.

But the mother added she personally would have preferred schools to wait a for a few more weeks to be safe.

In Switzerland, dentists, nursery schools and hairdressers were among a range of shops permitted to reopen Monday, while New Zealand was also prepared to begin its phased exit from lockdown.

"I'm delighted that we're starting up again. If we don't work, things are dead," hairdresser Anita Ayma said in Geneva.

"My regulars are very dear to me but we have to keep our distance and can't kiss upon greeting," she said in the salon, where customers were asked to wear masks and use hand sanitiser.

China, meanwhile, allowed tens of thousands of high school students in Beijing and Shanghai to return to school after months of closures.

"I'm glad, it's been too long since I've seen my classmates," 18-year-old Hang Huan said in Shanghai.

Infections in China have dwindled dramatically since the virus first emerged on its soil late last year.

But fears remain of a potential second wave of infections and cases imported from abroad.

Students in Beijing, where only high school seniors were allowed back, must have their temperatures checked at school gates and must show "green" health codes on an app that calculates a person's infection risk.

As scientists race to develop treatments and eventually a vaccine for the virus, countries are experimenting with ways to safely live with the contagion.

Several countries plan to introduce virus tracing apps to alert users if they are near someone who has tested positive -- technology already downloaded by nearly two million Australians, despite privacy concerns.

In Italy, Prime Minister Giuseppe Conte warned that people would have to wear face masks in public places and rigorously observe social distancing measures when the current restrictions are lifted on May 4.

Cultural norms like hugs and handshakes will also be discouraged.

Italy was entering an era "of responsibility and coexistence with the virus", Conte told the nation in a televised address.

Across the Atlantic, New York Governor Andrew Cuomo sketched plans for slowly reopening the state's economy, saying some manufacturing and construction firms may resume working on May 15.

But some conservative-led US states are speeding up the timeframe.

Rejecting the advice of top disease experts, Georgia has allowed thousands of businesses to resume operations, and Oklahoma will let restaurants and cinemas reopen from May.

Meanwhile, millions of Muslims around the world are also adjusting to a one-of-a-kind Ramadan without the mass prayers in mosques or large family meals that normally frame the daily fasting.

Saudi Arabia partially lifted its curfew, but said it would maintain a round-the-clock lockdown in the holy city of Mecca.

Not every country has enforced social distancing during the pandemic, however.

Secretive Turkmenistan, one of the few places not to have reported a single COVID-19 case held festivities to honour its national horse, with spectators packed into a hippodrome.