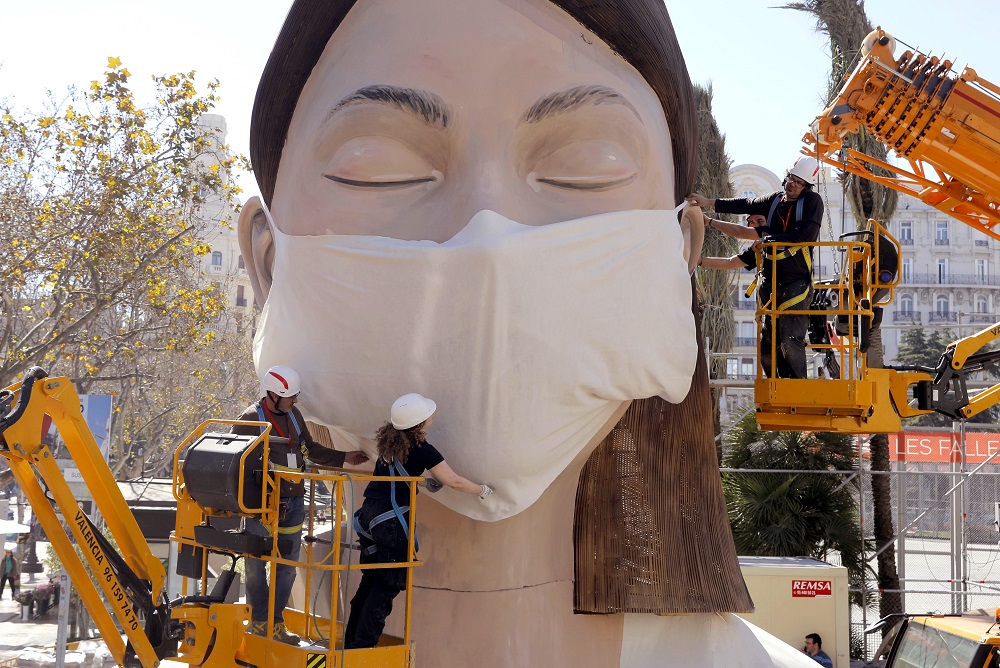 Workers place a mask on the figure of the Fallas festival in Valencia, Spain, on Wednesday. The festival, which was due to take place on Friday, has been canceled over the coronavirus outbreak. [ALBERTO SAIZ/ASSOCIATED PRESS]

European leaders have upgraded their measures to counter the novel coronavirus outbreak as the World Health Organization declared it a pandemic, including the tightening of a nationwide lockdown in Italy.

Italy's new restrictions that bolster its lockdown include orders to close schools, gyms, museums, nightclubs and other venues across the country, as the number of confirmed infections passed 12,000 on Wednesday.

By Wednesday morning, more than 15,000 cases had been reported in the European Union, the United Kingdom, and the European Economic Area－two-thirds of them in Italy, where 827 people have died.

Italian Prime Minister Giuseppe Conte said in a televised address to the nation that all shops would be shuttered except supermarkets, food stores, and chemists. Companies must close all nonessential departments, he added.

"We will only be able to see the effects of this great effort in a couple of weeks," he said, referring to the daily bulletins announcing the number of new cases and fatalities.

In Spain, where 2,968 infections had been reported, the president of the Madrid region, Isabel Diaz Ayuso, said on Thursday that the Spanish government was considering locking down Madrid, though it had denied the plan a day earlier.

At a news conference in Paris on Wednesday shortly after the WHO labeled the virus a pandemic, French Health Minister Olivier Veran vowed more actions but stopped short of raising the country's emergency response to "Phase 3", the highest level.

France has 2,281 confirmed cases with 48 deaths, Veran said on Wednesday, adding new restrictions would be implemented to try to contain the outbreak.

He said nurseries and schools would be closed for 15 days in two new areas: Corsica and an urban area around the southern town of Montpellier. This type of action is already in force in an area north of Paris and in another in northeastern France.

Veran said the government had decided, for several weeks starting from Wednesday, to ban visits to all the country's nursing homes, given that the elderly are the most vulnerable.

German Chancellor Angela Merkel vowed on Wednesday to do everything it takes to counter the effects of the coronavirus and that would happen in agreement with European partners.

"The message should be: We will do what is necessary as a country, and that is also together with Europe," she said at a news conference.

Merkel cited experts' estimates that 60-70 percent of Germany's population will eventually be infected, adding that since there was no known cure, the focus must be on slowing the spread of the virus. "It's about winning time," she said.

"This is a test for our solidarity, our common sense and care for each other. And I hope we pass the test," she said.

Merkel also said she was open to scrapping Germany's "black zero" rule to allow new government borrowing. She said it was "an extraordinary situation" and that ending the outbreak came first.

Germany had confirmed some 1,567 infections as of Thursday, with three deaths. The government has recommended the cancellation of all events with more than 1,000 people.

The British government is set to move to the "delay" phase, the second in Britain's four-step move, and introduce more stringent measures such as closing schools, canceling major sporting events and making people work from home, British media reported on Wednesday night.

In the UK, two elderly people died on Wednesday, taking the toll to eight. The number of confirmed cases rose to 456, up from 373 a day earlier.

British Prime Minister Boris Johnson was scheduled to chair an emergency security committee meeting on Thursday afternoon, at which he was expected to declare that Britain would switch from trying to contain COVID-19 to delay its spread, said the reports.

Jonathan Powell in London, Xinhua and agencies contributed to this story.