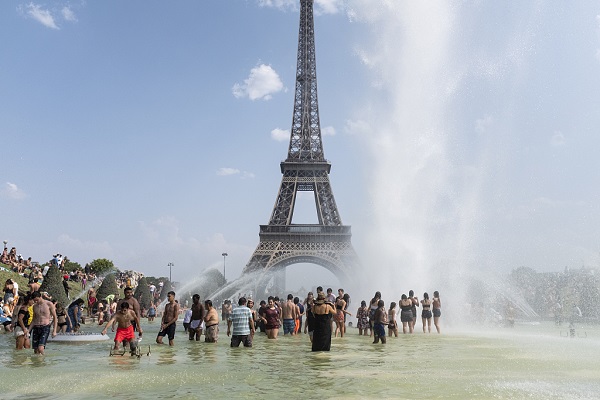 People cool off in and around a large water pool at Trocadero, across the Seine from the Eiffel Tower on July 25, 2019 in Paris, France. (Photo: VCG)

A heatwave that smashed temperature records in northern Europe finally relented Friday but thousands of holidaymakers were snared in travel chaos that followed the hot weather.

At its peak on Thursday, the heatwave broke national temperature records in Belgium, Germany and the Netherlands while Paris baked in its highest ever temperature of 42.6 degrees Celsius (108.7 Fahrenheit). 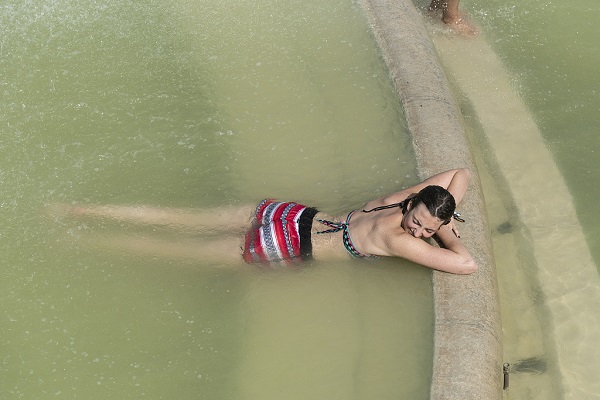 A young woman lies in the water of one of the pools of the Trocadero Fountain to cool down as Paris and France on July 25, 2019. (Photo: VCG)

A band of rain and storms moved in, causing some disruption to air travel, while there were severe delays on railways after scorching temperatures damaged infrastructure.

Some freak weather was also reported, with cyclists in the Tour de France facing a sudden hail storm that forced organisers to call off the day's racing in the French Alps.

Riders were "invited to gather in a tunnel" to shelter from the downpour, the Tour de France said on its website.

The county of Lincolnshire in eastern England saw a "heat burst" Thursday evening, with temperatures soaring from 22C to 32C and then back down again to 22C over the course of an hour.

"This was due to a thunderstorm collapsing and bringing hot air from aloft down to the surface," the Met Office weather service tweeted.

The mercury dived in France with outbreaks of drizzle as state weather service Meteo-France lifted "red" alerts imposed in 20 departments. 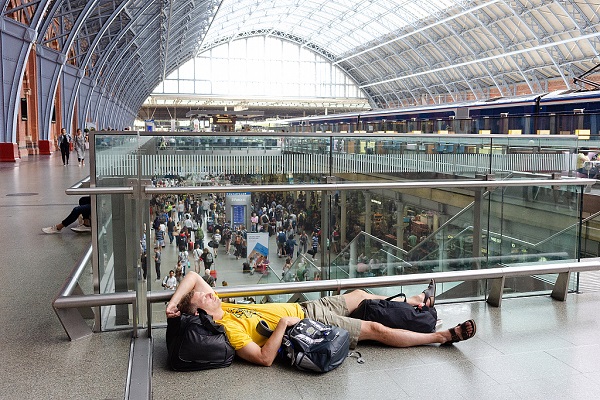 A man rests as delays continue to affect services at St Pancras station on July 26, 2019 in London, England. (Photo: VCG)

Travellers seeking to make their getaways also faced disruption, with flights at London's Heathrow and Gatwick airports were cancelled and delayed -- some by over two hours.

Elsewhere in the British capital there was still travel havoc due to rails buckling under the heat and fires breaking out along commuter lines. 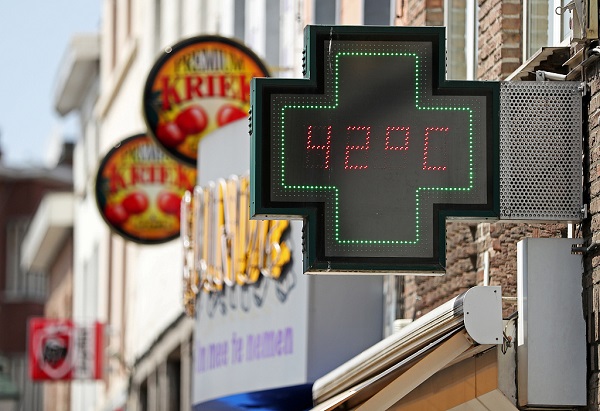 Thalys -- which links Paris to Brussels, Amsterdam and Cologne -- also saw disruption with slow trains amid fears infrastructure could overheat.

"You could have fried an egg on the tracks".

In Switzerland, train engineers painted rails white to reflect the heat of the sun.

Finnish police issued a warning to motorists after a record number of reports of drivers crashing into moose who wandered into the road in search of water.

The heat "makes the animals move further for water, and they may cross roads," Captain Joonas Tikka told AFP on Friday.

While some Finns tried to escape the heat -- which could exceed 35 degrees Celsius (95 Fahrenheit) this weekend -- others were not deterred from swimming in lakes and the sea, despite an outbreak of poisonous blue-green algae in popular spots.

In Paris, with public swimming pools overcrowded, many locals and tourists sought to cool off in public water features, notably the giant fountains at the Trocadero close to the Eiffel Tower.

"It is too hot to stay in the city in the daytime, there is nothing to freshen with. So for the kids it's very cool to have this place with water," said Norwegian tourist Yensi.

The heatwave has been particularly brutal in the countryside, aggravating fires which have seen thousands of hectares of crops destroyed in northern and central France.

Thousands of hectares of land went up in flames in northern France on Thursday, with fires still blazing Friday morning in Normandy.

French Agriculture Minister Didier Guillaume said Thursday that farmers in worst-affected areas would receive additional Europe-backed funding and the right to graze their animals on land not normally used for agriculture.

"It's catastrophic in terms of heat, so we're hoping the weather gets back to normal so that we can have a few flowers," said Jason Augusto, a beekeeper in the Sologne region of northern France. 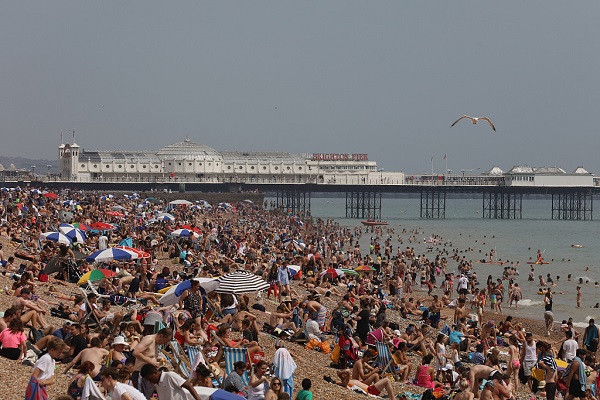 Beachgoers relax on a packed Brighton Beach on July 25, 2019 in Brighton, England.(Photo: VCG)