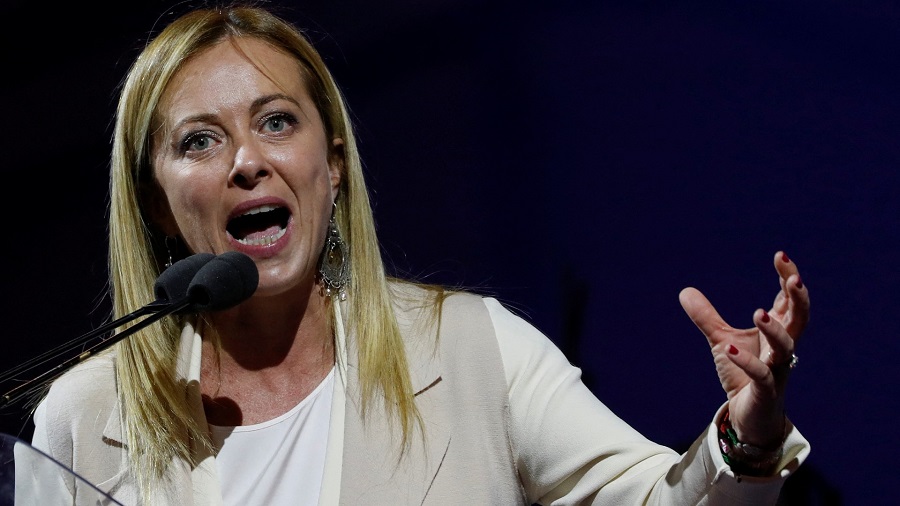 Italians are preparing for a general election which could see the far-right gain power for the first time in 80 years and jeopardise Italy's position in Europe and its stance on the Ukraine conflict.

According to the last opinion poll before a two-week embargo, the right-wing coalition led by Giorgia Meloni's Brothers of Italy Party, Matteo Salvini's The League and Silvio Berlusconi's Forza Italia is expected to take around 47 percent of the vote, 20 percent more than the centre-left.

Lorenzo Castellani, political history professor at Rome's Luiss University, said: "The most likely scenario is a landslide win by the right-wing coalition particularly with the leadership of Giorgia Meloni as the most voted party of the coalition."

It would make her Italy's first female prime minister and the first far-right leader since World War II.

At the final campaign rally in Rome, Meloni said she was ready to govern. "We will build a solid, cohesive government with a strong popular mandate, which will remain in power for five years, whether the left likes it or not."

Franco Messina, 69, was among those in the crowd and said: "This is what's great about Meloni, her grit. Everything she says is true, there are no lies."

A 21-year-old student Sara Simeone added that Meloni had what it takes to be a leader. "I like Giorgia Meloni because she is determined and secure in what she says."

The left-wing coalition is led by the Democratic Party, with the Green and Left parties. PD leader Enrico Letta says voters need to protect Italy's democracy and ties with the EU.

Letta says a right-wing victory would be a win for Vladimir Putin due to Salvini and Silvio Berlusconi's "friendly" ties with Russia. However, Meloni herself has always supported Ukraine and NATO.

"The League, which is an important party of the right-wing coalition, has strong ties with Russia, so for sure there is a risk in terms of political stability," said Professor Castellani.

Other themes in an unexpected summer campaign were the energy crisis, tax cuts and the national unemployment welfare system.

Another significant point of contention is Italy's $200 billion share of the European Union (EU) Recovery Fund. While the Democratic Party has committed to the Draghi government's investment plan, the right-wing coalition government says it wants to alter the program, which could anger Brussels.

Meloni insist she is not a fascist but the Brothers of Italy party has its roots in the Italian Social Movement, which rose from the ashes of the Mussolini regime.

Francesco Tallai, 35, will vote for the Democratic Party and says he's worried about the outcome. "I have a deep gut feeling that things will change after this election and that Italy will never be the same," he said.

The fate of the country is now in the hands of voters, who will have their say on Sunday.