Countries across Europe took bolder steps in easing coronavirus lockdowns, with schools, pubs, parks and pools reopening in places, while in Latin America the outbreak grew more dire with infections passing the one million mark. 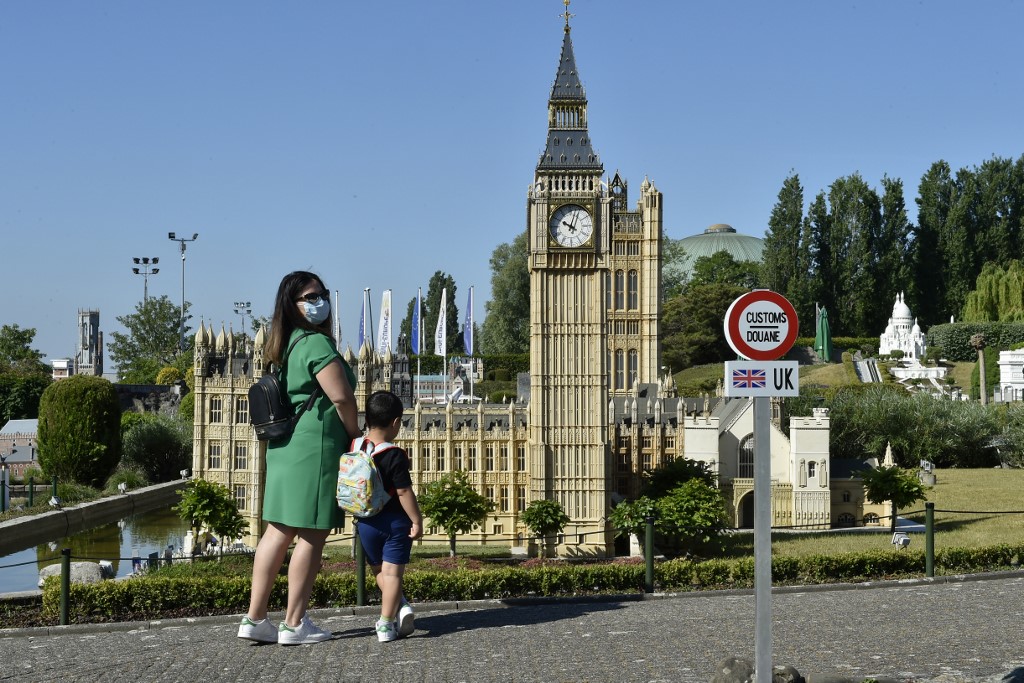 A model of a customs road sign is seen at the mock border of the United Kingdom and the European Union, a visitors look at a model of Big Ben, during the reopening of the 'Mini-Europe' theme park of small-scale models of European capitals and their landmarks, in Brussels on May 20, 2020. (Photo: AFP)

The deadly disease has now killed more than 372,000 million people and infected at least 6.1 million.

It has ravaged economies and threatens to tip the world toward a recession not seen in decades, while hemming billions of people in across the globe under lockdowns to slow its deadly march.

But from Russia to France, Italy and Britain, countries have started to emerge from months-long lockdowns, cautiously returning to a new post-pandemic version of normal.

Bars were set to serve again in Finland and Norway -- albeit with distancing restrictions or shortened hours -- while some schools in Britain and Greece opened doors again Monday.

But the decision to allow schools to partially reopen in Britain drew scorn from some accusing the government of moving too fast.

Britain has the second highest death toll in the world after the US, and Prime Minister Boris Johnson has come under fire for bungling the response to the outbreak early on.

Leaders in Russia too faced backlash for easing restrictions in the capital Moscow, the epicentre of the outbreak that has been under lockdown for months.

Shopping malls and parks reopened Monday, despite the still-high number of cases that officials chalked down to large-scale testing -- not a signing of a ballooning outbreak.

There was cautious hope among some shopkeepers eager to see business pick up again.

"We opened two hours ago but we already have a few clients. I'm pretty optimistic, I think people will come back little by little," Olga told AFP at her shop selling handbags and jewelry in central Moscow.

Elsewhere in Europe even bolder steps were taken. Greece opened some hotels, schools, pools and tattoo parlours, while in Slovenia a mandatory rule to wear masks was eased as the country declared the end of the outbreak.

"We took advantage of the fact that foreign tourists aren't here yet," said Pierluigi, adding that it was his first visit to the massive amphitheatre.

And in France, parks in Paris opened for the first time in months, ahead of restaurants, cafes and bars being allowed to serve on sidewalks and terraces in the city on Tuesday.

The pandemic has devastated the global economy, which is facing its worst downturn since the Great Depression, and with businesses and citizens growing tired of confinement, there is pressure on many leaders to press on with reopenings -- especially in nations where outbreaks appear to be slowing.

But health experts have continued to warn of the possibility of a second wave of infections if authorities and citizens let their guard down, especially if they risk large gatherings.

In Brazil, which has more than half a million known infections and the second highest caseload in the world after the US, anti-lockdown President Jair Bolsonaro again defied social distancing recommendations on Sunday.

Wearing no face mask, the far-right leader met a tightly packed group of supporters in the capital Brasilia as the crowd chanted "Myth! Myth! Myth!" -- echoing his dismissal of the virus threat.

Bolsonaro has been a staunch opponent of lockdowns as a tool for containing the coronavirus, saying they are unnecessary and harmful to the economy, but he has faced intense criticism from worried state authorities and angry citizens.

Despite his scepticism, the virus rages on in Brazil and other parts of South America, with the situation in Chile, Bolivia and Peru also worsening.

In a grim new landmark, infections in Latin America and the Caribbean surged past one million, according to an AFP tally based on official sources.

'Die from virus or hunger'

In the United States -- the worst-affected nation in the world -- Washington and Los Angeles resumed outdoor dining, while New York City is on track to begin re-opening from June 8.

Some Asian countries have started on a tentative path to recovery, such as Thailand, which relies heavily on tourist spending. The kingdom has now reopened beaches nationwide after two months of lockdown to try to revive tourism.

"I couldn't resist the temptation," German expatriate Heidi Glemeau told AFP after an early morning dip on a deserted beach in Pattaya.

"It's become a paradise just like it was 30 years ago."

But other, much more populous nations have moved to relax restrictions despite not entirely containing the disease.

India announced it would begin easing the world's biggest lockdown in early June, even as it marked another record daily rise in infections.

Neighbouring Bangladesh, meanwhile, lifted its lockdown on Sunday, with millions heading back to work in densely populated cities, even as the country logged record spikes in new deaths and infections.

Similarly, the Philippines -- which has also seen a surge in cases -- eased the lockdown of its capital on Monday to give a boost to its economy.

"The virus is frightening," salesman Himmler Gaston told AFP in Manila. "But it's either you die from the virus or you die from hunger."