When life in their native Venezuela became too much of a struggle, Catherine Negrin and her family upped sticks and moved thousands of miles away to northwestern Spain, which is trying to attract new inhabitants. 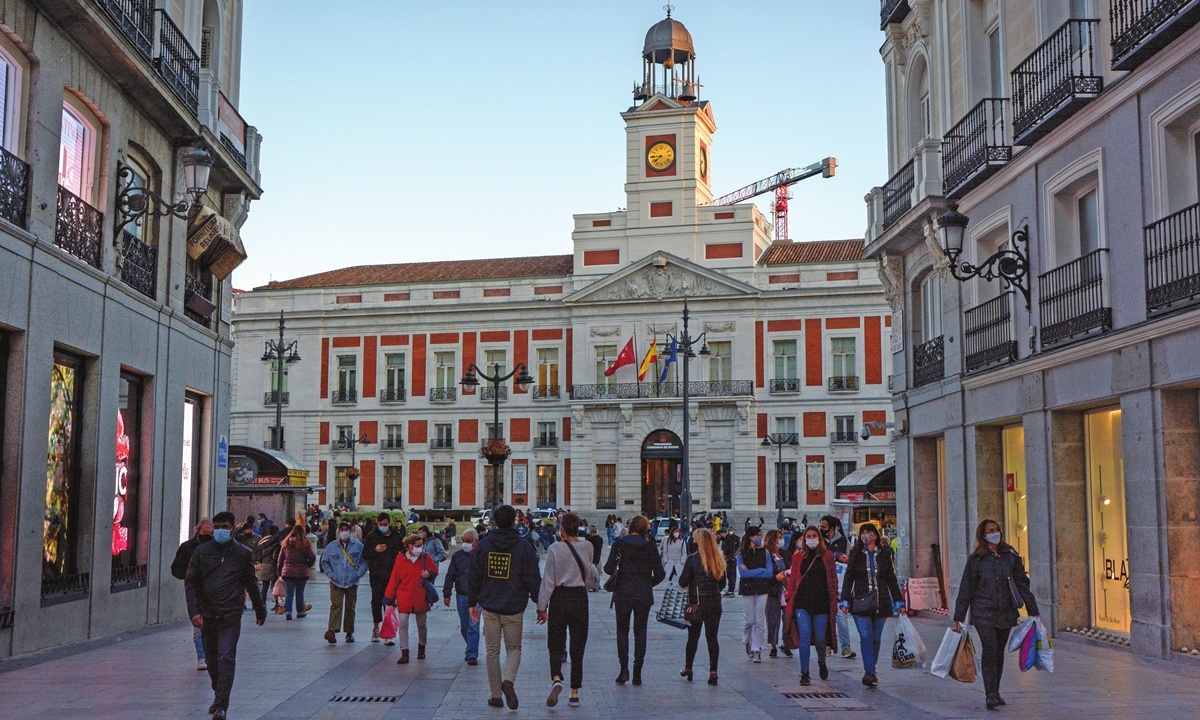 A general view of Madrid, Spain on October 2 (Photo: VCG)

Despite well-paid jobs in the military and in teaching, Negrin said shortages and price hikes made getting their hands on everyday goods like food and medicine a real challenge in the capital Caracas.

In February, the couple and their three children resettled in a small village in Galicia - they already had relatives in the rural region and the cost of living was affordable, Negrin explained.

"Because of our economic situation and having three children, we couldn't live in the city," she told the Reuters.

Negrin's family relocated with help from the Confederation of Rural Development Centres (COCEDER), one of several initiatives aimed at repopulating Spain's emptying interior by encouraging its citizens and foreigners to settle in remote areas.

While 85 percent of Spain's territory is made up of rural areas, only 20 percent of the population live in them, according to the European Association for Information on Local Development, a nonprofit based in Brussels.

It breaks the "vicious circle of population loss and, with it, [loss] of economic activity, services and such like, that lessen the appeal of these areas," she added.

In 2018, COCEDER launched an online platform called Back to the Village (or Volver Al Pueblo), which collates information for those considering a move to rural Spain, including job openings and houses and small businesses up for sale or rent.

The platform links up potential settlers with rural development centers in eight Spanish provinces, from where they can receive further advice and potential help with relocating.

But house prices could start rising in these sparsely populated areas, as months of confinement due to coronavirus lockdowns motivate some city dwellers in Europe to move to rural areas, real estate experts say.

In France, there has been a nearly 10 percent jump in Parisians looking for homes in the countryside since February, in search of gardens and access to nature, according to a survey by French real estate portal SeLoger.

Policy experts say rural depopulation began in Spain in the 1960s and 1970s, when mechanization made many agricultural workers redundant and masses of people moved to the cities looking for work.

The villages they left behind have been dubbed "ghost villages," and in some of them an entire hamlet of several houses can be bought for less than 100,000 euros ($117,000).

Alongside COCEDER's Back to the Village, a number of other schemes are trying to breathe new life into these villages, including the New Paths (Nuevos Senderos) initiative.

The project, run by the nonprofit Cepaim Foundation, helps African immigrants find new jobs as shepherds or handymen. The Living Villages (Pueblos Vivos) project offers free information and guidance to anyone considering a move to the countryside. And a scheme launched earlier in 2020 by the Towns with a Future Association, a nongovernmental organization, helps mostly Latin American migrants resettle in Spain's rural areas.

Back to the Village, which over the past two years has been contacted by about 4,000 people and helped 54 people resettle, is already planning to expand, said Sara Garcia Sanz, a spokeswoman for COCEDER.

The goal is to grow the existing network of associations it works with, particularly to increase the number of jobs advertised on the site, she said.

"[Our] success can be measured through the people we have helped take the step, see how they have improved their quality of life ... closer to nature, less stressed, and with a cost of living more adapted to reality," she said.

The initiative is also set to become part of a larger program known as POISES, which is subsidized by the EU's European Social Fund, which promotes economic and social inclusion.

Neither the Spanish Ministry of Social Rights nor the Ministry for Ecological Transition and the Demographic Challenge were available for comment.

Spain is not alone in Europe as it grapples with rural depopulation, with countries like Sweden, Austria, Finland, the Netherlands and Germany all hosting schemes that focus on bringing migrants to live in the countryside.

In Sweden, the Rostanga Together (or Rostanga Tillsammans) project was started by a group of parents in 2007 when they realized a school in the small village of Rostanga was being threatened with closure due to population decline.

The parents set up a grant-independent shareholding company that raises money to invest in empty properties in the village, explained Nils Phillips, president of Rostanga Together. When 300 refugees were placed in Rostanga's asylum center in 2015, the nonprofit developed a joint initiative in which residents and asylum seekers worked together as volunteers to renovate the houses.

Some refugees who got permanent residency and chose to stay in the village are now renting the flats they helped renovate, as tenants in the development company, Phillips said.

"This is not an integration project, which is also why it's successful. We work in property development and make things happen," he said.