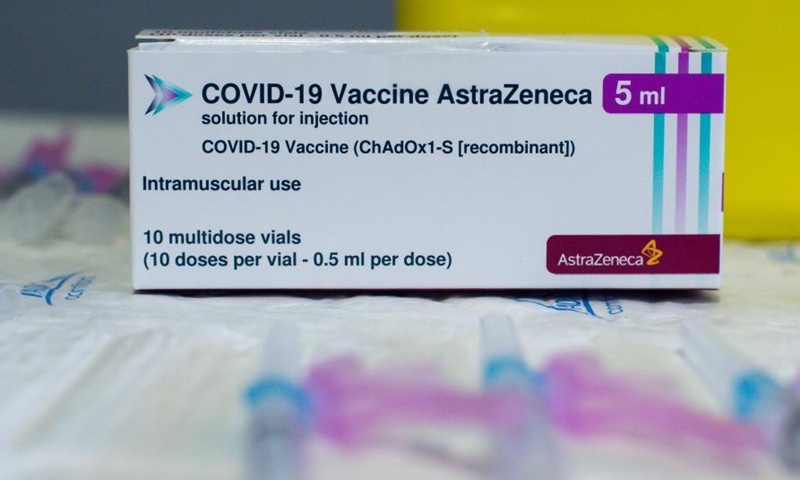 The public's eroding confidence in the AstraZeneca COVID-19 vaccine, short supply of vaccines, relaxing restrictive measures too soon led to the third wave of coronavirus in Europe, Chinese observers said, warning Europe could become a new epicenter and result in the new global wave of COVID-19.

Europe's drug regulator, European Medicines Agency, stated Thursday in a preliminary review report of the incidents that the benefits of the vaccine outweighed the risk of the side effects, although it admitted that the vaccine "may be associated with very rare cases of blood clots associated with thrombocytopenia."

The vaccine rollout may be resumed overnight, but not people's confidence in the vaccine.

A new study of people's confidence in the vaccine before and after the suspension, conducted by Michael Bang Petersen, a political scientist at Aarhus University, showed that the Danish decision caused vaccine confidence to drop by about 11 percent in Denmark, and countries including France, Italy and Germany also witnessed an erosion in people's confidence

To boost confidence in the vaccine, French Prime Minister Jean Castex is scheduled to be inoculated on Friday with the AstraZeneca COVID-19 vaccine, French TV station BFM TV reported.

The World Health Organization's vaccine safety panel is expected to issue its findings on the AstraZeneca vaccine on Friday.

The declining confidence and sluggish vaccine rollout have made things worse for Europe already suffering from a short supply of vaccines.

Unlike the US, where vaccine production and inoculation are up to speed, Europe has been slow to get the vaccine and has suspended vaccinations temporarily. Even if the vaccine rollout is restarted, it will take more efforts to restore people's willingness to vaccinate, Zeng Guang, chief epidemiologist at the Chinese Center for Disease Control and Prevention, told the Global Times on Friday.

Europe is also mired in the third wave of coronavirus, as Europe has now seen three consecutive weeks of growth in COVID-19 cases, with over 1.2 million new cases reported last week, and some 48 out of 53 European countries or territories have reported the B.1.1.7 variant, which was first identified in the UK.

The number of people dying from COVID-19 in Europe is higher now than it was this time last year, Hans Henri P. Kluge, WHO Regional Director for Europe, said on Thursday, according to the WHO website.

He said that 21 European countries have gradually eased restrictive measures, and some countries did this based on assumptions that increasing vaccinations in countries would immediately lead to an improved epidemiological situation. However, Kluge said "vaccination by itself - particularly given the varied uptake in countries - does not replace public health and social measures."

Consisted of many small countries, Europe failed to form unified and effective epidemic control norms among its member countries as some countries have had a different attitude toward the epidemic from the very beginning, Zeng said, adding that such differences have led to a failure in virus containment on the continent.

Yang Zhanqiu, deputy director of the pathogen biology department at Wuhan University, told the Global Times that the dominant COVID-19 virus in Europe, compared with those prevalent in Asia and the US, has stronger transmission and breeding ability, which is another reason of the drawn-out battle against COVID-19 in Europe.

Zeng warned that it's completely possible that the epidemic situation in Europe would get worse and once the virus prevails in Europe, it would eventually lead to a new global wave of coronavirus.

The worsening situation in Europe provides an opportunity for it to consider other vaccine options such as China-produced vaccines that were not introduced due to ideological bias.

Aside from purchasing Chinese vaccines directly, Europe could allow the West's major pharmaceutical companies such as Sanofi to apply for authorization of Sinopharm or Sinovac to produce Chinese vaccines which will be more convenient and cost-effective, Chinese health observers said.