WORLD Europe sees first dip in COVID-19 cases in months, but deaths up: WHO

Europe sees first dip in COVID-19 cases in months, but deaths up: WHO 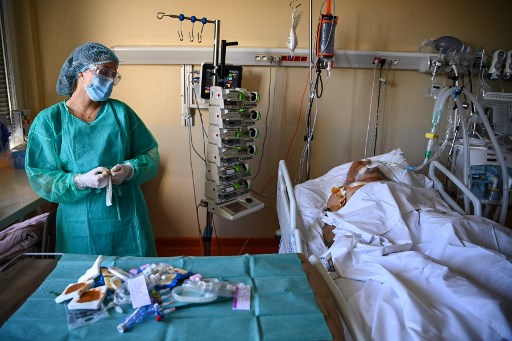 A member of the medical staff tends to a patient at an intensive care unit for patients infected with Covid-19 (novel coronavirus) at the Centre Hospitalier de l'Europe in Le Port-Marly, near Paris on November 4, 2020. (Photo: AFP)

The number of new COVID-19 cases declined last week for the first time in over three months, but deaths in the region continued to climb, WHO data showed Wednesday.

In total, nearly four million cases of the novel coronavirus were registered worldwide during the week ending Sunday, and almost 60,000 people died from the disease during the same period, the World Health Organization said.

Europe, which on Tuesday saw its total number of coronavirus infections climb past 15 million, remained the hardest-hit region.

Last week it accounted for 46 percent of the new global cases and 49 percent of the deaths, the UN health agency's weekly epidemiological update showed.

With 1.84 million new cases registered, the caseload across the region remained staggeringly high, but WHO noted that "in the past week, for the first time in over three months, the region observed a decline of 10 percent in weekly cases."

At the same time though, more than 29,000 new COVID-19 deaths were registered across Europe — an 18 percent jump from the previous week, it said.

The WHO data showed that Austria reported the sharpest increase in new cases on the continent last week, marking a 30 percent hike from the previous week.

The Americas, which is the second worst-hit region, meanwhile continued to show surging numbers of cases and a hike in deaths from the novel coronavirus.

Case numbers across the region grew by over 40 percent, with more than 1.45 million new cases registered, and deaths were up by 11 percent, with over 19,100 new fatalities during the seven-day period.

More than one million of the new cases were seen in the United States, which has counted nearly 11 million cases since the beginning of the pandemic.

The only region that saw a decline in the number of new cases and deaths last week was Southeast Asia, WHO said.

Worldwide, more than 1.3 million people have died of COVID-19 and over 55 million have been infected with the virus since it first surfaced in China late last year, according to a tally from official sources compiled by AFP.