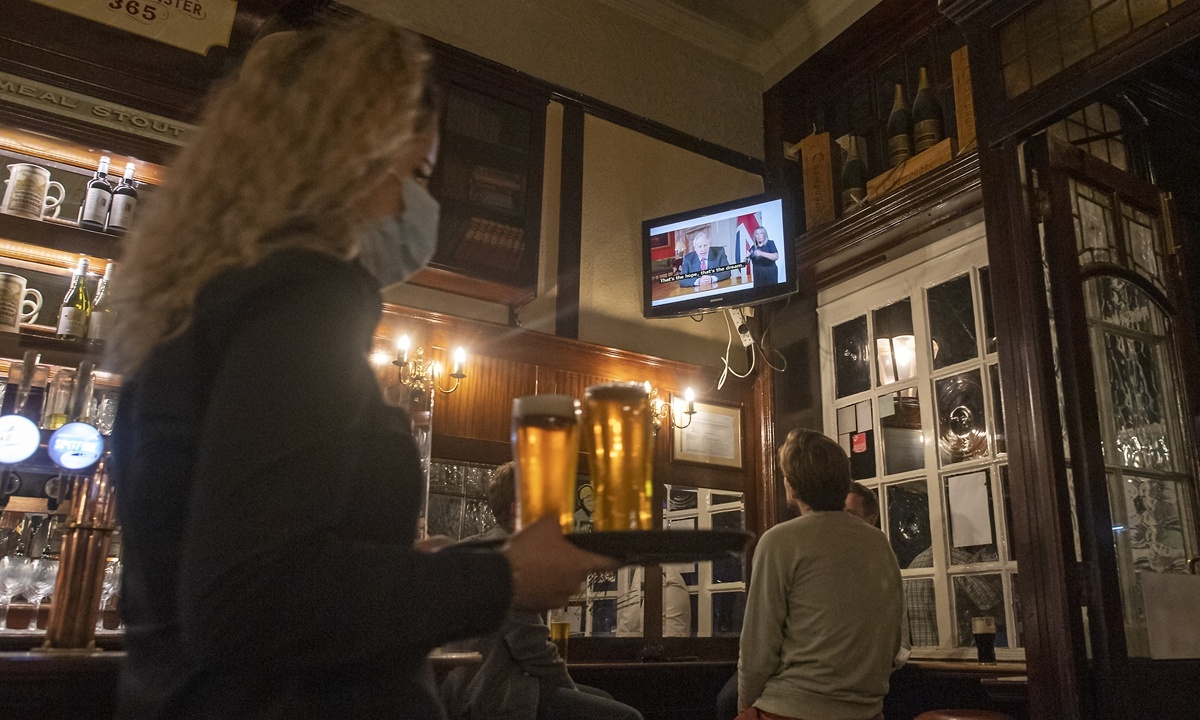 A waitress serves drinks as patrons watch Britain's Prime Minister Boris Johnson addressing the nation about the latest updates on the COVID-19 restrictions, at the Westminster Arms in London on Tuesday. Photo: AFP

The British government announced fresh steps on Tuesday to try to stop a coronavirus surge in England, as the World Health Organization (WHO) warned that new cases worldwide soared to record levels last week.

The tally of 1,998,897 infections was "the highest number of reported cases in a single week since the beginning of the epidemic," the WHO said, adding that the number of deaths fell compared with the previous week.

The death toll in the US passed another dismal milestone on Tuesday, soaring beyond 200,000 as cases approached 7 million in the world's worst-affected country.

The ramped-up response in Britain followed warnings that the country could see an explosion of cases and deaths if it failed to take decisive action.

From Thursday, English pubs, bars and other venues will be required to close at 10 pm. Food and drink outlets will also be restricted to table service.

Some businesses have criticized the move, saying it will inflict more suffering on an already beleaguered industry.

But customers outside cafes in central London were broadly supportive of the new rules if it meant avoiding another lockdown.

Many nations in Europe were easing restrictions after largely overcoming initial outbreaks, but the resurgence of the virus has forced them to tighten curbs again.

Spain's health minister on Tuesday called on Madrid residents to limit their movements and social contacts to the essential.

Across Europe, hundreds of major events have been scaled back or cancelled and on Tuesday the most august of all gatherings, the Nobel prize ceremony, announced it had also succumbed to the pandemic.