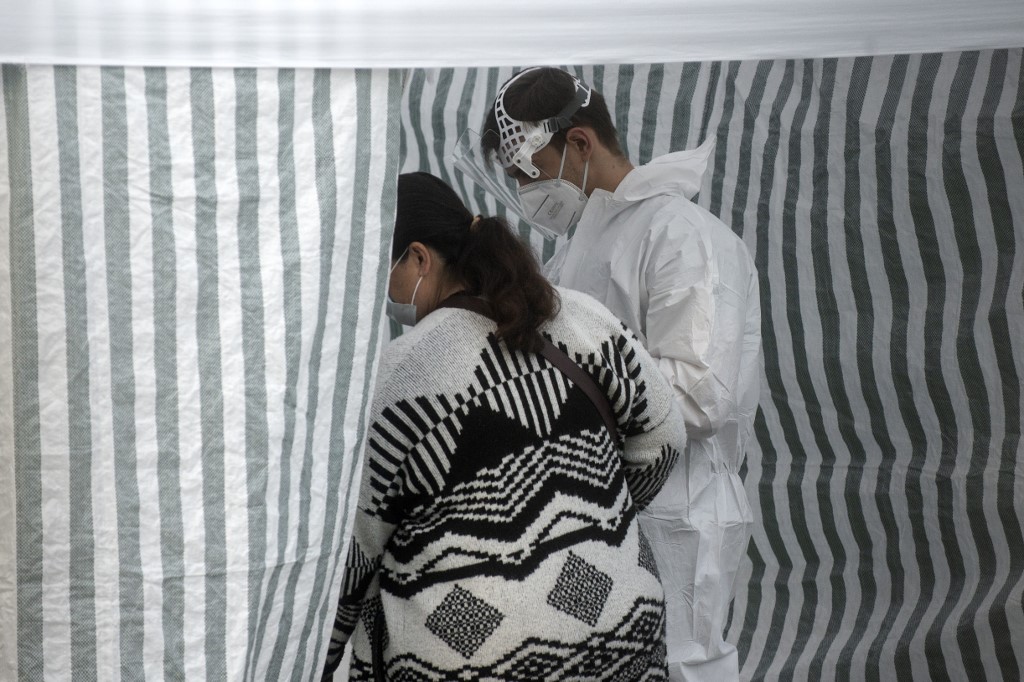 A woman wearing a face mask walks to get a test for COVID-19 at a coronavirus testing station on September 24, 2020 in Prague. (Photo: AFP)

Some European countries have carried out tougher measures, including restrictions on indoor and outdoor gatherings, mandatory mask-wearing and deployment of police on streets to combat rising COVID-19 cases.

Another 22,961 people in Britain have tested positive for COVID-19, bringing its national caseload to 502,978, according to official figures released on Sunday.

Tighter restrictions came into force at midnight on Saturday in parts of northern England, making it illegal to meet people indoors from other households in the Liverpool City Region, Hartlepool, Middlesbrough and Warrington.

The move came after Britain's R number, which shows the coronavirus reproduction, has risen to as high as 1.6, the latest official figures showed Friday.

If the reproduction rate is above one, it means the number of cases will increase exponentially.

British Health Secretary Matt Hancock said it was "necessary" to bring in the new measures and urged people in these areas to travel only when it is essential -- for example to school and work, and not to attend sports events as spectators.

More than a third of Britain's population is now under tightened restrictions, the BBC reported.

The Italian capital is taking aggressive steps against the pandemic, including the deployment of police on the streets of Rome to enforce the implementation of hygiene rules.

Residents of Lazio -- the region that includes Rome -- are required to wear masks at all times, even when they are outside and far from anyone else (exceptions only allowed for those with certain medical problems, children under the age of six and people who are exercising).

At least three smaller Italian regions -- Campania, which includes the city of Naples; the island region of Sicily; and Basilicata, the arch of Italy's boot-shaped peninsula -- have issued similar mask laws.

Local media reported that more than 800 additional police officers were posted to the streets of Rome to issue warnings to rule-breakers on Saturday, and violators could face fines of up to 400 euros (470 U.S. dollars).

Over 3,000 police controls had been carried out in Rome on Saturday morning alone, according to local television channel 10.

Greek authorities have announced their decision to extend a series of restrictive measures introduced a few weeks ago until Oct. 12 due to a high epidemiological load in Athens and the wider region.

The measures include a limit of nine people for indoor and outdoor gatherings and a suspension of indoor and outdoor concerts, Nikos Hardalias, deputy minister for Civil Protection and Crisis Management, said during a regular press briefing on Friday.

Similar restrictions have been implemented in many regions lately as the authorities make efforts to avoid a new full nationwide lockdown.