WORLD Europe wants to join the big league in data

Europe wants to join the big league in data 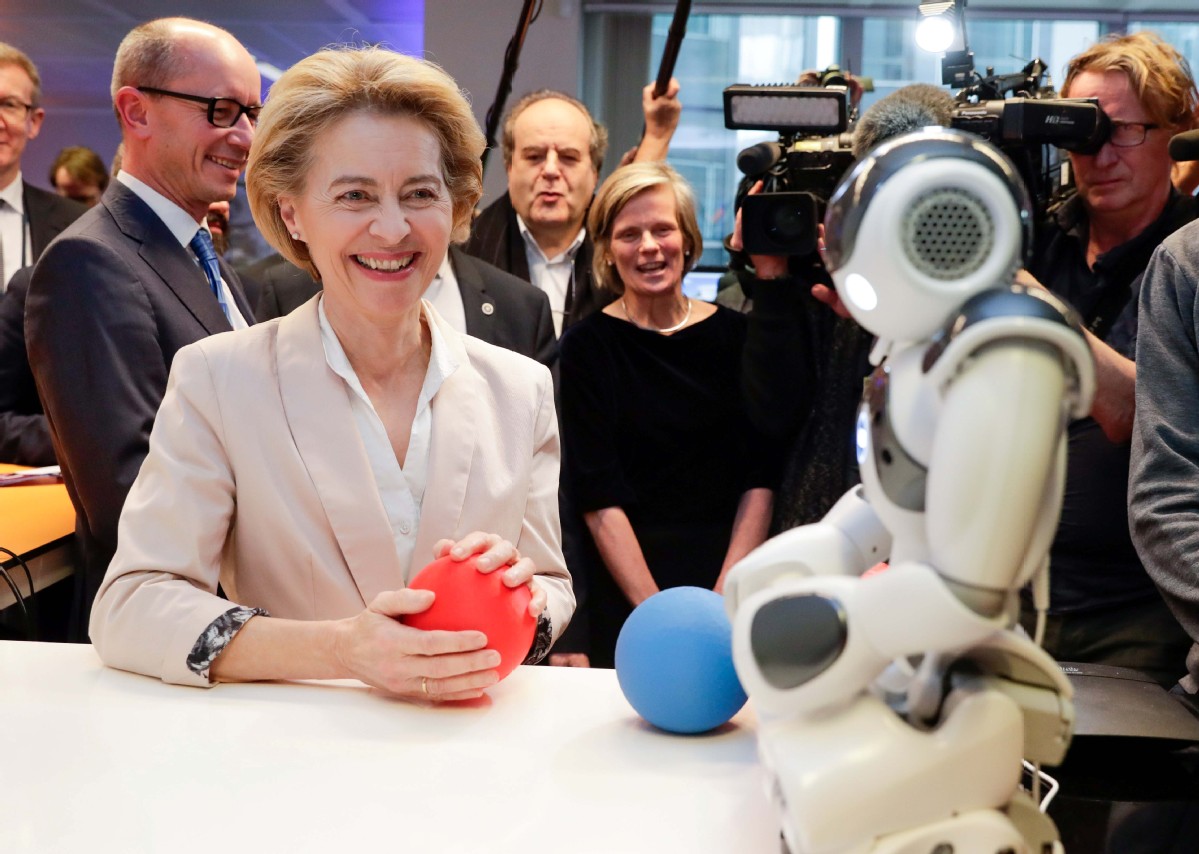 Ursula von der Leyen, president of the European Commission, looks at the invention "Do you Speak Robot?" during a visit to the AI Xperience Center at the Vrije Universiteit Brussel in Brussels, Belgium, on Tuesday. (Photo: Reuters)

Strategy unveiled for EU to take on China, US in AI by clearing barriers within bloc

The European Union has unveiled a bloc-wide strategy to build itself into a powerhouse of industrial data and artificial intelligence, or AI, and to fend off competition from China and the United States.

The proposal marks a change of direction for the EU and a deliberate effort to stand up to other big data gathering nations and bodies.

The policy was formally launched on Wednesday but advance leaks said the new approach would focus on having sector-specific policies, investment in infrastructure, and tighter regulations to encourage cross-border information sharing, and get rid of barriers to sharing of data.

Breton said he expected the handling of data from sectors such as healthcare, industry, energy and transport to be at the forefront of the new policy, and that Europe was in a good position to stand up to its rivals.

"The bulk of the industrial value chain, from large groups to SMEs (small and medium-sized enterprises), is based in Europe today," he said.

Even before becoming the president of the European Commission, Ursula von der Leyen made it clear she wanted to challenge the global supremacy of US technology giants such as Google, initially going after them over the issue of tax, but also using their dominance as part of her pitch for Europe's top job.

"It is not too late to achieve technological sovereignty in some critical technology areas," she said in a speech in October, highlighting the importance of the topic.

"We will jointly define standards for this new generation of technologies that will become the global norm."

She demonstrated her commitment to the cause of AI with a visit to the AI Xperience Center at the Vrije Universiteit Brussels in Brussels on Tuesday.

Breton, who attended a global security conference in Munich at the weekend, along with many heads of government and global tech companies, has also spoken of the potential for dominant players in sectors such as cloud storage to be broken up in favor of "mini-clouds".

The day after the Munich conference, he met Facebook CEO Mark Zuckerberg in Brussels for discussions that Zuckerberg told reporters were good and wide-ranging. But Breton was more terse in his comments, warning that Facebook needed to do more to fall into line with European demands on the regulation of online platforms.

"It's not for us to adapt to this company, it's for this company to adapt to us," he said, while also rejecting Facebook's own suggestion for looser rules as "not enough "and failing to recognize its own position of dominance in the world of digital data.