"I am very much in favor of international collaboration, and China is part of this world," Woerner told Xinhua, who added that Europe and China have a lot of cooperation in space science, and astronauts from both sides have done some training together in China. 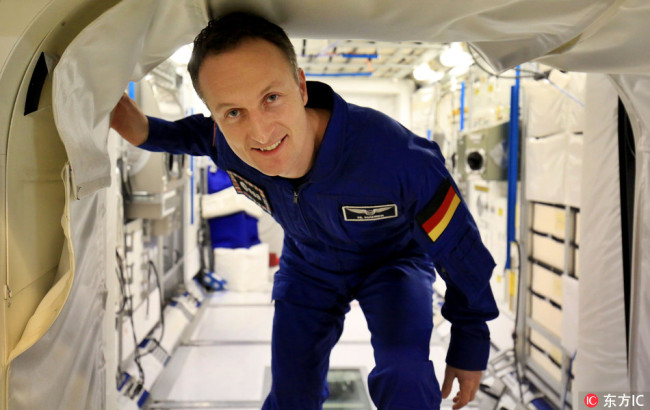 Astronaut Matthias Maurer at a training center for the European Space Agency, stands next to a model of a space capsule. (File photo: IC)

Matthias Maurer, an ESA astronaut with German nationality, told Xinhua earlier that he had learnt Chinese for over six years, and said that he hoped to fly work with astronauts from China and other countries in the Chinese manned space station, which was planned to be completed around 2022.

"Besides Matthias, several of our astronauts are learning Chinese, It's a kind of preparation," said Woerner.

China and EU signed an agreement in 2015 concerning the cooperation in manned space program, stipulating that the period from 2015 to 2017 was the stage of technological exchanges, and the two sides take part in each other's astronauts' training programs.

"Although it is not on the agenda, it's a possibility," said Woerner.

Zhang Kejian, deputy minister of the Ministry of Industry and Information Technology of China, and head of the China National Space Administration, said at the International Astronautical Congress in Bremen that China is willing to cooperate with other countries in space program.

Zhang also noted that Chang'e-6, China's second sample return lunar mission, will provide 10 kg of payloads on the orbiter and lander for international partners, an invitation for cooperation.