BRUSSELS, Oct. 6 (Xinhua) -- The European Commission on Tuesday published its annual enlargement package assessing the implementation of reforms in the countries aspiring to join the European Union (EU), together with a plan to hand out more economic help for these nations.

The package included country-specific reports on the progress of the six Western Balkans and Turkey, giving assessments and guidelines.

Commenting on Western Balkans, European Commissioner for Neighbourhood and Enlargement, Oliver Varhelyi, said credible progress in the rule of law area remains a significant challenge, and the overall pace in the fight against corruption has slowed down.

Turning to Turkey, Varhelyi said it needs to sustain constructive efforts to stop "illegal" activities with Greece and Cyprus. Turkey has not reversed a negative trend of moving further away from the European Union, he said.

In response, the Turkish Foreign Ministry criticized the EU report, saying in a statement that the report "reflects the EU's biased approach which is also away from being constructive and has double standards," Turkey's state-run Anadolu news agency said.

Presenting the investment plan, Varhelyi said it "should help transform the Western Balkans into one of the most attractive regions for investment in the world."

The commission is proposing to mobilize up to 9 billion euros (10.56 billion U.S. dollars) of funding for investment flagships in the areas of transport, energy, green and digital transition to create sustainable growth and jobs, according to a press release.

In May, the commission confirmed that the publication of the annual enlargement package was postponed until autumn due to the COVID-19 pandemic. It is now for the Council of the EU to consider the recommendations and take decisions on the steps ahead. Enditem 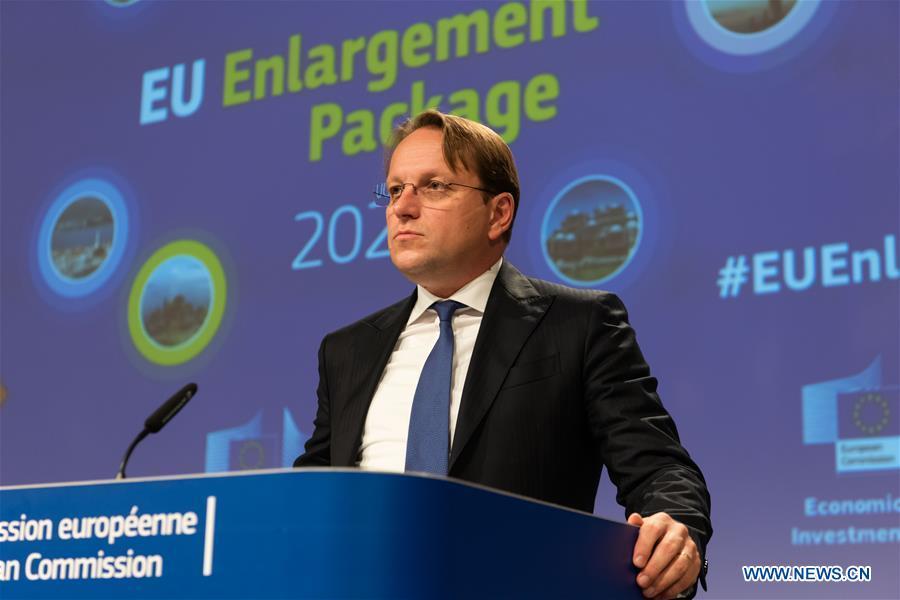 European Commissioner for Neighbourhood and Enlargement Oliver Varhelyi attends a press conference on the EU enlargement package and economic and investment plan for the western Balkans, at the EU headquarters in Brussels, Belgium, Oct. 6, 2020.  (Xinhua/Zheng Huansong)