BRUSSELS, Aug. 15 (Xinhua) -- Several European countries have decided to evacuate diplomats, citizens from Afghanistan and close embassies there as Taliban members have entered the capital Kabul on Sunday. 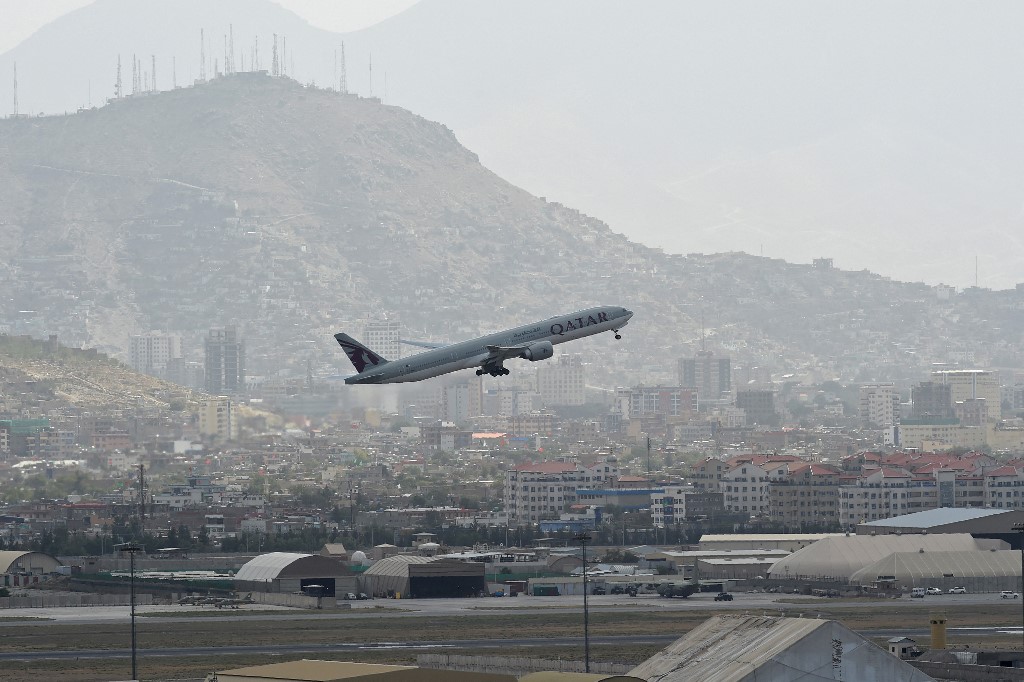 This picture taken on August 14, 2021 shows a Qatar Airways aircraft taking-off from the airport in Kabul. (File photo: AFP)

The French embassy in Kabul has moved to the capital's airport to help the evacuation of French nationals in the country, the Ministry for Europe and Foreign Affairs announced on Sunday.

"The Ministry of the Armed Forces will deploy military reinforcements and air assets to the United Arab Emirates in the coming hours, so that the first evacuations to Abu Dhabi can begin," added the ministry in a statement.

Earlier in the afternoon, in a video posted on his Twitter account, French ambassador to Afghanistan David Martinon filmed himself in a helicopter "leaving the former green zone" of Kabul.

"The immediate and absolute priority in the coming hours is the security of the French, who have been called to leave Afghanistan, as well as the personnel there, French and Afghan," said the French presidential office in a statement.

Part of the German citizens there have already flown out of the country and military planes will land in Kabul on Sunday night to help the evacuations, he said.

British Prime Minister Boris Johnson said on Sunday that the US decision to pull out of Afghanistan has "accelerated things," noting "no one wants Afghanistan to become a breeding ground for terror."

The situation in the war-torn country has been worsening since the speedy withdrawal of US-led troops starting on May 1. US. President Joe Biden has ordered the US military to end its mission in Afghanistan by the end of this month.

The British parliament will be recalled on Wednesday from their summer recess to debate the government's response to the rapidly evolving situation in Afghanistan.

Sweden will close its embassy in Afghanistan's capital Kabul with immediate effect and no later than Monday, Foreign Minister Ann Linde announced on Sunday.

The evacuation of embassy personnel and local staff would commence immediately, Linde told a press conference.

"What is happening now is ... happening at a speed that no one could have predicted," said Linde, who had said on Friday that an evacuation was not imminent.

Finnish Foreign Minister Pekka Haavisto said Sunday that Finland is temporarily closing the embassy in Kabul, and there will be "no service available from Monday". He said Finnish diplomats were awaiting flights out of the country and were in safety.

Afghan President Mohammad Ashraf Ghani left the country on Sunday night, while the Taliban forces entered the capital of Kabul and took control of the presidential palace.

The Taliban has assured that all the diplomatic missions and foreign citizens in Kabul will face no dangers. Taliban spokesman Zabihullah Mujahid said they are committed to ensuring security in the Afghan capital.