BELGRADE, Feb. 14 (Xinhua) -- As Hungary joined Serbia in spearheading mass inoculation with China's Sinopharm COVID-19 vaccine in Europe, other European countries are struggling against a vaccine delivery crisis and exploring a way out of lockdown and into economic recovery. 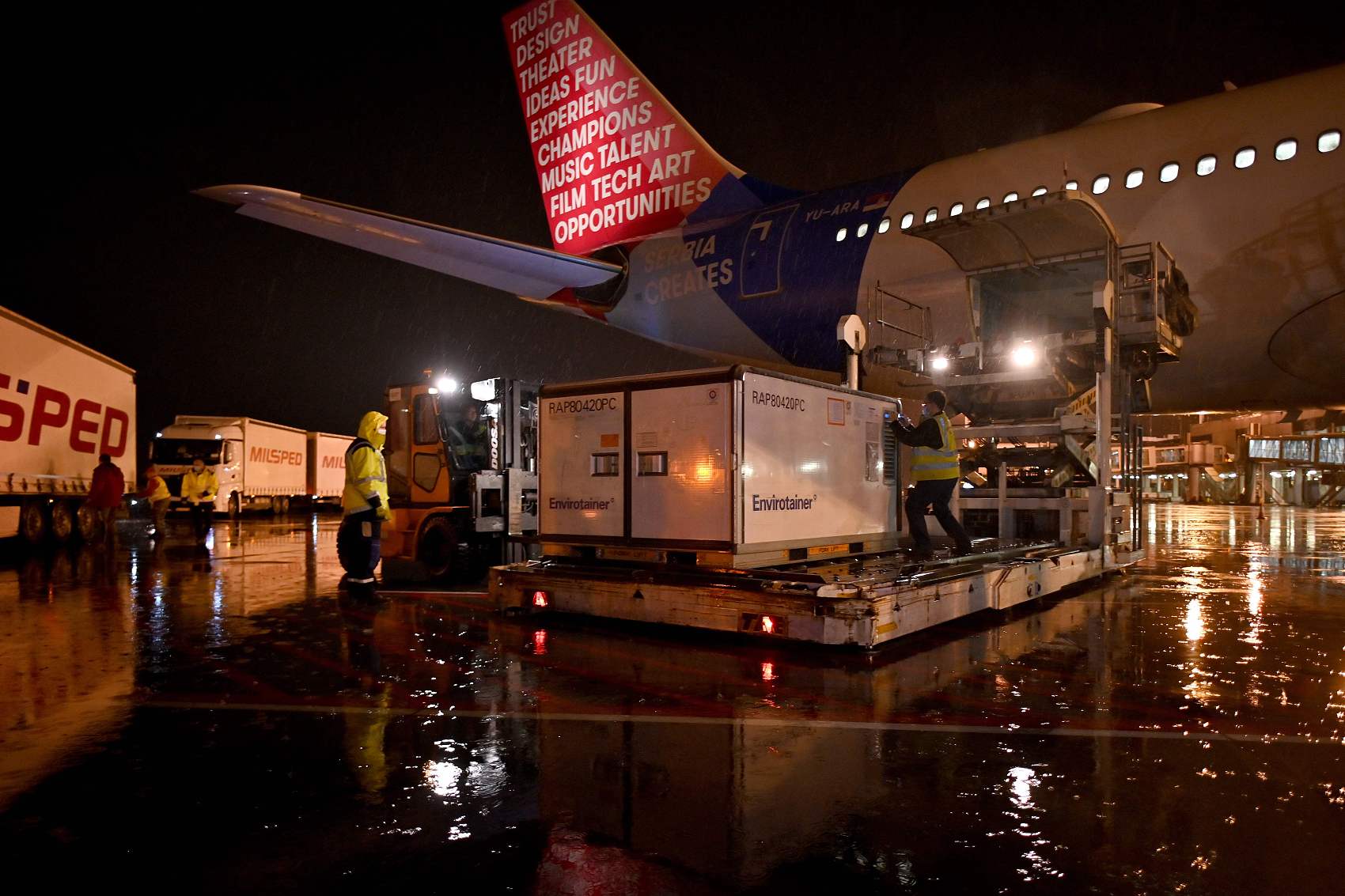 In around a month, 14 percent of Serbia's 6.5-million population received their first doses of vaccine against COVID-19, thanks to the 1.5 million Chinese-made doses.

Following its neighbor, Hungary on Jan. 31 announced that it has reached a deal with Sinopharm, which will enable a mass immunization of 2.5 million people.

As the first shipment is supposed to arrive next week, Hungary is bound to become the first European Union (EU) member to sign up for Chinese vaccines.

"This deal will speed up vaccination, which could save the lives of thousands of people and contribute to lifting restrictions sooner," said Hungarian Foreign Minister Peter Szijjarto.

Also on Jan. 31, German Health Minister Jens Spahn said he is "open" to the use of vaccines from Russia or China in Germany, while Markus Soeder, minister-president of the German state of Bavaria, called on the European supervision body to test Russian and Chinese vaccines "as soon as possible."

A shipment of Sinopharm vaccines will arrive in Bosnia and Herzegovina soon too, as one of its two entities, Republika Srpska (RS), ordered them on Feb. 8, Minister of Health and Social Welfare of RS Alen Seranic told Xinhua.

RS institutions have been following all the scientific effects and references of vaccines from all producers, including Chinese ones, and the efficiency, quality, and safety of vaccines are the three criteria that all vaccines entering RS must fulfill, said Seranic.

"Based on other countries' experiences, where Chinese vaccines have been already approved, we decided that we also need to acquire a certain number of vaccines from China," said Seranic.

"We already ordered vaccines for 20 percent of our population," he said, adding that ordering vaccines from China "will make us happy to be able to offer different kinds of vaccines to the citizens."

Earlier this month, German Chancellor Angela Merkel and French President Emmanuel Macron expressed openness of their countries to any vaccines approved by the European Medicines Agency (EMA), which has so far only given green light to vaccines of Pfizer/BioNTech, Moderna and AstraZeneca.

The shortage of approved vaccines in Europe has been drawing increasing public criticism and prompting demands for alternative solutions.

Addressing such concerns, European Commission President Ursula von der Leyen admitted on Wednesday that the EU is lagging behind in combating the virus and it was "too optimistic" about the mass production of the vaccine.

It takes an additional three or four weeks to get the EMA's approval, which is "an investment in trust and safety," she said, while announcing a new regulatory framework as a future solution to speed up the process.

And yet, the public in the EU member countries seems not equally patient, as saving lives and ending lockdowns have become imperative.

"If there are no vaccines, we cannot vaccinate," Todor Kantardjiev, director of the Bulgarian National Center of Infectious and Parasitic Diseases, said last month, complaining about the poor progress of the inoculation program.

"The state will look for other options and we will not hesitate to buy any vaccine that is effective and harmless and that is recognized by Europe, including, of course, from Russia and China," Kantardjiev said.

In Serbia, the Sinopharm's vaccine is welcomed with full trust, and the early inoculation is seen as an opportunity, according to Ivona Ladjevac, head of the center for the Belt and Road Initiative at the Institute of International Politics and Economics in Serbia.

"We should use this opportunity," said Ladjevac. "Serbia can do something like Israel, the first country that will finish this mass vaccination and get back to normal. We can achieve something like that too."

Serbian President Aleksandar Vucic said in an interview with Xinhua that most people in the country are vaccinated with Sinopharm vaccine.

"There is not such a country in Europe in which you can find that level of trust (in Chinese vaccine) that you can see here in Serbia," he said.

"People here are very satisfied and we are very proud that we succeeded in delivering such good things for the better health of our people and for the future of this country," said the Serbian president.