BRUSSELS, March 29 (Xinhua) -- With the Easter holidays around the corner, many European countries, faced with a possibly worst third wave of COVID-19, have started to tighten their lockdown measures in an attempt to build a "breakwater." 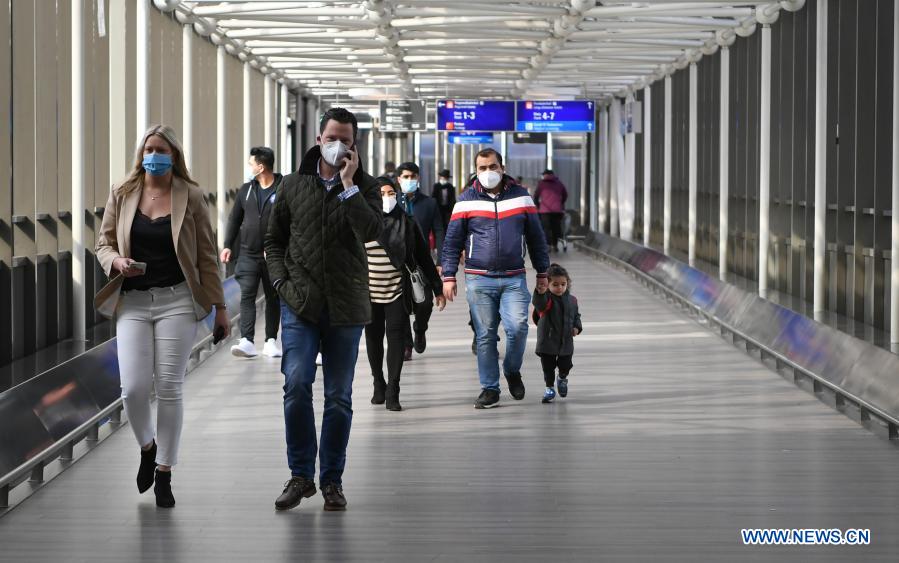 Starting from Sunday, stricter prevention and control measures, including early closure of businesses and traffic restrictions, will be adopted in several major cities in Romania, including the capital Bucharest.

According to the decision of the National Committee for Emergency Situations, people's free movement will be permitted over weekends till 20:00, and businesses are allowed to open till 18:00, in areas where the incidence of COVID-19 infection exceeds 4 per thousand inhabitants in the last 14 days.

The measure will cease to apply when the cumulative incidence rate in the last 14 days falls below 3.5 per thousand, said Raed Arafat, secretary of state who heads the Emergency Situations Department at Ministry of Internal Affairs.

"It's good, it's an extra prevention. Don't you see how widespread it is," said Adrian Spinei, a retired doctor.

"I think these restrictions are sufficient at the moment, if everyone, at least the citizens of Bucharest, the metropolis, can obey and enforce them sacredly," said gallery owner Ioana Tomescu.

The Lithuanian government on Friday decided to extend its current nationwide lockdown for another month, till April 30.

It has also imposed a ban on non-essential travel between municipalities from March 27 to April 6 in a bid to curb the spread of the highly contagious COVID-19 variants first detected in Britain and South Africa.

"The quarantine, I think it is very nice, because we changed our way of working. I don't need to go to the office, I can work from my house," said Rasa, an economist working with an agricultural information center, who only gave her first name.

"I don't feel any pressure from this quarantine time," she said.

In Croatia, the existing restrictions are expected to remain in force during the Easter holidays until the overall epidemiological situation improves in the country, which has a population of around 4 million people.

"We opened three weeks ago. We were closed for almost 80 days, so 70 to 80 days, and that's really a long time," said Marko Benkovic, a waiter at Cafe Kavanica in downtown Zagreb, the Balkan country's capital.

In Estonia, the current restrictions affecting schools, shops, restaurants and public events entered into force on March 11 and will stay in place until at least April 11.

Portugal on Thursday extended the state of emergency till April 15 to combat the spread of COVID-19. President Marcelo Rebelo de Sousa called for "prudence" among the public during the Easter holidays to ensure the confinement is "successful."

In Poland, where many people traditionally observe Easter by attending churches and traveling for family gatherings, the public have been advised to limit Easter celebrations to direct family members.

Prime Minister Mateusz Morawiecki warned Thursday that the country is reaching the limits of its healthcare system.

"The bottleneck does not lie with our equipment, but with the number of available medics and nurses," he said.

In France, "reinforced braking measures" have been taken in three more regions -- Rhone, Aube and Nievre -- in a bid to contain a third wave of the pandemic. Similar rules have been applied in 16 French departments, including Paris and its surrounding areas, to relieve the strained hospital system.

"The epidemic situation is not good. The trend is on the rise almost everywhere in France even if the level of virus circulation remains different from one region to another," Health Minister Olivier Veran said Thursday.

In Austria, three eastern states will go into a lockdown during the Easter holidays to contain a resurgence of infections, Health Minister Rudolf Anschober said Wednesday.

Vienna, Lower Austria and Burgenland will impose more restrictive measures on April 1-6, Anschober told a press conference. All-day exit restrictions will apply again as during the previous two lockdowns. Only a few exceptions will be made to meet some essential needs.

The goal is to install a "breakwater" by reducing contacts, further increasing testing and expanding the use of face masks, said Anschober.

In Germany, a general COVID-19 test obligation for all entries by airplane would come into force on Monday night, as the COVID-19 numbers were rising too fast and virus variants made "the situation particularly dangerous."

If the country's infection situation would "continue unchecked, we run the risk that our healthcare system will reach its limits in the course of April," Health Minister Jens Spahn said Friday.

"There are very clear signals that this wave can be even worse than the first two waves," said Lothar Wieler, president of the Robert Koch Institute, the government agency for disease control and prevention.

"We are only at the beginning of this development. And if we do not take massive countermeasures now, the consequences will be serious," Wieler warned.

So far, most European countries and their peoples have pinned their hopes on the rollout of COVID-19 vaccination.

At a virtual summit on Thursday, European Union (EU) leaders agreed to boost the production of COVID-19 vaccines in Europe to improve the rollout of vaccination programs across member states, European Council President Charles Michel said at the end of the meeting.

"It's absolutely vital, of course, that we keep on working to improve vaccine production in Europe, and improve our ability to distribute those to member states," Michel told a press conference.

Compared with the United States and Britain, the bloc is falling behind on its vaccination rollout, mainly due to the limitations of the pharmaceutical companies' production capacity and supply chains.

The 27 EU member states have received some 88 million doses of the vaccines and 62 million have been administered. Among those vaccinated, only 18.2 million, or around 4 percent of the EU population, have fully received two jabs.

"We could have been much faster if all pharmaceutical companies had fulfilled their contracts," von der Leyen said, with a clear reference to AstraZeneca. She warned that the Anglo-Swedish firm would have to "catch up" before it is allowed to export doses outside the bloc.