ROME, Oct. 30 (Xinhua) -- German, French and British leaders have expressed hopes of a return to full compliance with the Iran nuclear deal by all parties after a meeting with U.S. President Joe Biden on Saturday. 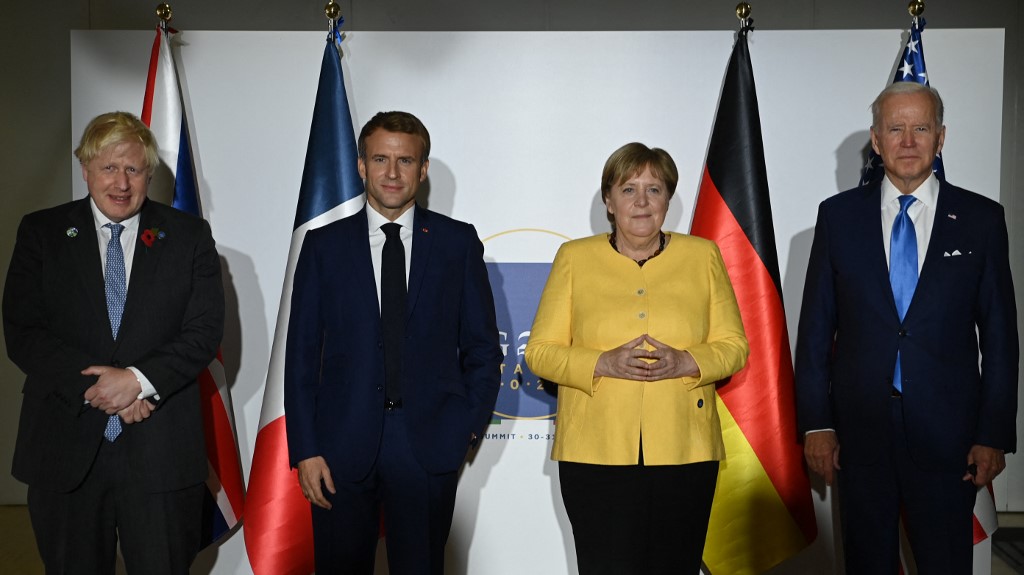 (From L) British Prime Minister Boris Johnson, French President Emmanuel Macron, German outgoing Chancellor Angela Merkel and US President Joe Biden pose within a meeting about the Joint Comprehensive Plan of Action (JCPOA) on the sidelines of the G20 of World Leaders Summit on October 30, 2021 in Rome. (Photo: AFP)

"We welcome President Biden's clearly demonstrated commitment to return the U.S. to full compliance with the JCPOA (Joint Comprehensive Plan of Action) and to stay in full compliance, so long as Iran does the same," said a statement jointly issued by Biden, German Chancellor Angela Merkel, French President Emmanuel Macron and British Prime Minister Boris Johnson.

The meeting of the four leaders was held at the sidelines of the Group of 20 (G20) summit in Rome.

"We are convinced that it is possible to quickly reach and implement an understanding on return to full compliance and to ensure for the long term that Iran's nuclear program is exclusively for peaceful purposes," said the statement.

Iranian nuclear negotiator Ali Bagheri Kani met EU coordinators on Wednesday and agreed to resume negotiations aimed at reviving the JCPOA, by the end of November.

"Return to JCPOA compliance will provide sanctions lifting with long-lasting implications for Iran's economic growth," said the statement, adding that "this will only be possible if Iran changes course."

The four Western leaders called upon Iranian President Ebrahim Raisi to "seize this opportunity and return to a good faith effort to conclude our negotiations as a matter of urgency."

The previous U.S. administration pulled Washington out of the JCPOA in 2018, and reimposed old sanctions, as well as new ones on Iran. Iran retaliated by gradually dropping some of its commitments under the pact, and "has accelerated the pace of provocative nuclear steps, such as the production of highly enriched uranium and enriched uranium metal," the leaders said.

"A government that talks about an intention of returning to the nuclear deal but continues (former U.S. President Donald) Trump's policy of sanctions is sending the message that it really is not reliable," Iran's foreign ministry spokesman Saeed Khatibzadeh said in remarks published on the ministry's official website.

Between April and July this year, six rounds of talks were held in Vienna, Austria, with regard to a strict monitoring of Iran's nuclear program and the lifting of sanctions on Iran, before the process was interrupted by Iran's governmental transition.