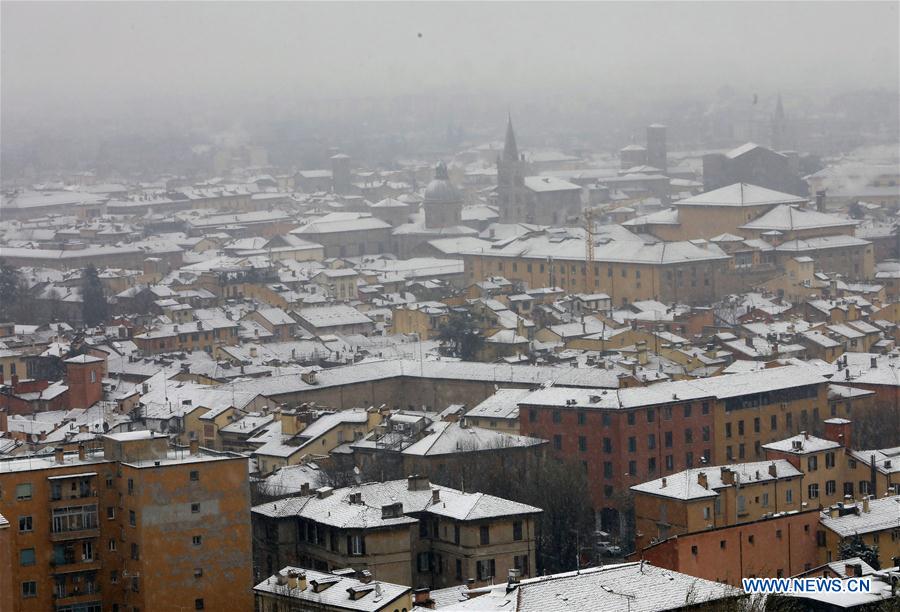 Roofs of buildings are covered with snow in Bologna, Italy, on March 26, 2020. (Photo by Gianni Schicchi/Xinhua)

BRUSSELS/GENEVA, March 26 (Xinhua) -- European nations on Thursday brought in more tough measures to curb the contagion as COVID-19 continues its advance in the continent.

Meanwhile, the World Health Organization (WHO) urged all countries to unite against the pandemic, warning that "millions could die" without aggressive action.

Italy is one of the nations bearing the brunt of COVID-19 in Europe. It has seen the total number of infections rise to 80,539, according to the latest count released by the Civil Protection Department on Thursday. The death toll there has increased to 8,165.

In neighboring France, the virus claimed 365 lives in 24 hours, bringing the total fatalities to 1,696 while the number of confirmed cases jumped to 29,155.

Jerome Salomon, Director General of Health, noted however that currently the number of deaths only takes into account those who passed away in hospital. Deaths in retirement homes and at home will be available soon, which is likely to result in a big increase in fatalities.

On the same day across the English Channel, Britain reported the single-day deaths of more than 100 for the first time since the outbreak of the disease, taking the tally to 578. Confirmed cases in the country has risen to 11,658.

To date, Spain and Germany have seen the number of confirmed cases up to 56,188 and 36,508 respectively. The total death toll in Spain exceeded 4,000.

These figures came at a time when WHO Director-General Tedros Adhanom Ghebreyesus warned at the G20 Extraordinary Leaders' Summit on COVID-19 held via video link on Thursday: "Almost half a million people have already been infected, and more than 20,000 have lost their lives. The pandemic is accelerating at an exponential rate." 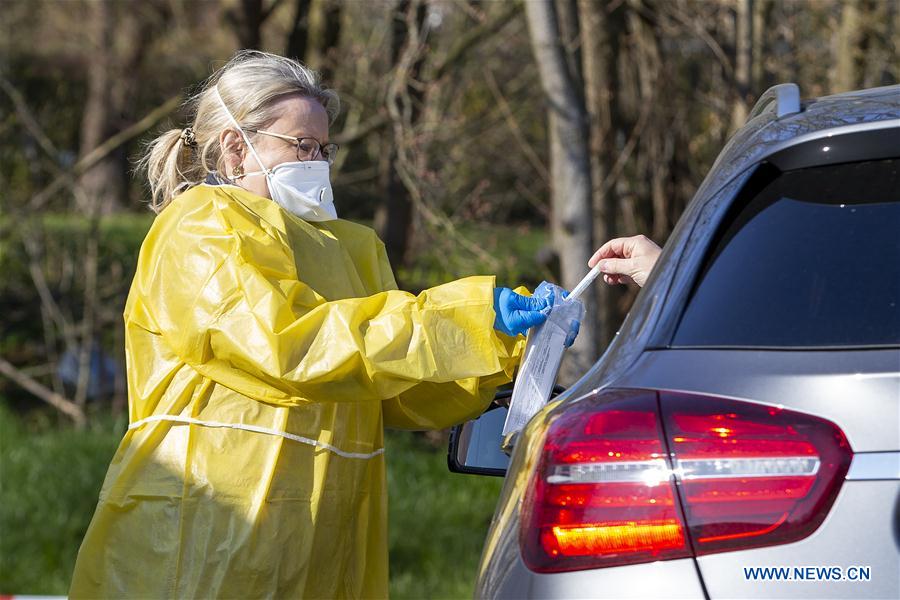 A healthcare worker takes a sample from a driver to test for possible COVID-19 infection at a drive-through test station in Iserlohn, Germany, on March 26, 2020. (Photo by Joachim Bywaletz/Xinhua)

The WHO chief said, "Without aggressive action in all countries, millions could die. The full social, economic and political fallout, only time will tell."

He raised three requests to address the global crisis that demands a global response. The first is to fight. "Fight hard. Fight like hell. Fight like your lives depend on it -- because they do. The best and only way to protect life, livelihoods and economies is to stop the virus. No excuses. No regrets," the WHO chief noted.

"We must immediately build, expand, train and deploy health workers to find, test, isolate and treat every case and trace every contact," he added.

The second is to unite. "No country can solve this crisis alone. We're all in this together, and we will only get out of it together," he said, calling for global solidarity.

The third is to ignite. "Repurpose the industrial might of your nations for this effort. Ignite global production for the tools we need to save lives now. Ignite innovation for vaccines and therapeutics. And ignite a global movement to ensure this never happens again," he said.

In the race against the virus, European countries have continued to upgrade their responses.

Italy's privacy regulator on Thursday okayed a temporary decree that will allow the government to use "digital contact tracing" to track the movements of people infected by the coronavirus or who may have come into contact with infected individuals.

In a statement from the Guarantor for the Protection of Personal Data (Garante per la Protezione dei Dati Peronali) -- Italy's privacy watchdog -- Antonello Soro, president of the regulator, said the measure "was not a question of suspending privacy rights [but rather] of providing effective tools to contain the outbreak while balancing respect for the rights of our citizens."

In Spain, the parliament has given its approval to Prime Minister Pedro Sanchez's request to extend the State of Alarm to April 12 from the original March 14.

A State of Alarm grants the government special powers to limit the movement of citizens, control the means of production, and use private assets as well as the military to carry out essential logistical and supply work if needed.

Meanwhile, Germany has set up a new research network to link university hospitals to fight COVID-19.

A total of 150 million euros (164 million U.S. dollars) were made available to finance the establishment of the network -- 100 million euros this year and an additional 50 million euros next year, according to Minister of Education and Research Anja Karliczek.

"This unique scientific project, this interaction of different forces will really take us a big step forward" in the research and treatment of COVID-19, said Karliczek.

In Britain, the National Health Service (NHS) is seeking thousands of extra staff among health workers recently retired, while a military field hospital with 4,000 beds is being installed in east London.

Prime Minister Boris Johnson said on Wednesday that 405,000 people had responded in just 24 hours to a call for volunteers to support the NHS and vulnerable people, significantly more than the 250,000 initially sought.

In Albania, which confirmed 174 cases, the government will convert the campus of a former private university in Tirana into a hospital for the treatment of patients infected with coronavirus. The temporary hospital will initially provide about 100 beds.

Prime Minister Edi Rama said that the new quarantine hospital must be ready to use within 30 days. (1 euro= 1.10 U.S. dollars)